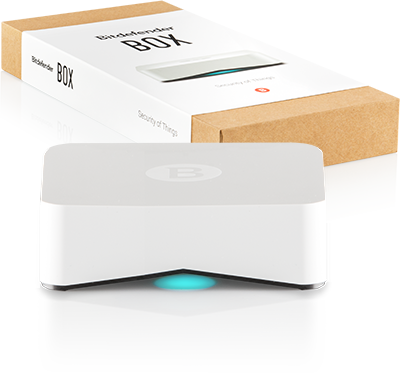 Being quite the computer person I was asked to review the Bit Defender Box and so I set about setting it up and seeing how and more importantly IF as the saying goes “Does exactly what it says on the box!”

Ok I have to say right off the bat you need to know a bit about computer home networking for the initial setup of the box. The problem lays in once everything IS plugged in and you’ve downloaded the app (available on google play and apple store) You basically need to turn off ALL the devices you have connected to your network and restart the router and then all your devices one by one (I had to do this to get it working at least) Oh one thing I have to say that didn’t impress me was having to login to a new site to setup an account and then finding out that after the initial 30 days (or perhaps first year) it becomes a subscription service.

There is a nice Blue light that gives a nice glow on the front it looks quite nice and does not blind you as it points downwards,it flashes when you are configuring the unit and remains constant when in use and red should you have problems and when there is an update in progress it will be white…There is just 16MB (flash memroy)  64MB DDR2 RAM. There is two 10/100 Ethernet ports, a power port, and a reset button all placed on the back of the unit.

Using The Device
Pretty straight forward to use it the app is actually pretty good at has an easy and manageable GUI to get around. It will send you notifications if it senses anything untoward and it can be used with most of the IOT devices (I have a few of these) which is a good thing as most of them do NOT have their own malware or firewalls built into them

And Now The Good And Not so Good

The good.
Reasonably easy setup
Nice and small so can be tucked away
I liked that you can name each device and label it as guest or family device

The not so Good.

As I said you need to be somewhat computer savvy to get this up and running correctly and even then you aren’t entirely sure its completely doing its job.
The one I received came with a U.S USB charging socket thankfully these aren’t expensive and theres always some laying around.
The notifications it DID send weren’t very specific (but again this is just me being picky)

If you`re just a general web surfer and do some media streaming (movies from different providers) or some you-tubing this box will do the trick…Its disappointing it’s a subscription service after a limited “Free” time. In the end it works, but always remember NOTHING is unhackable