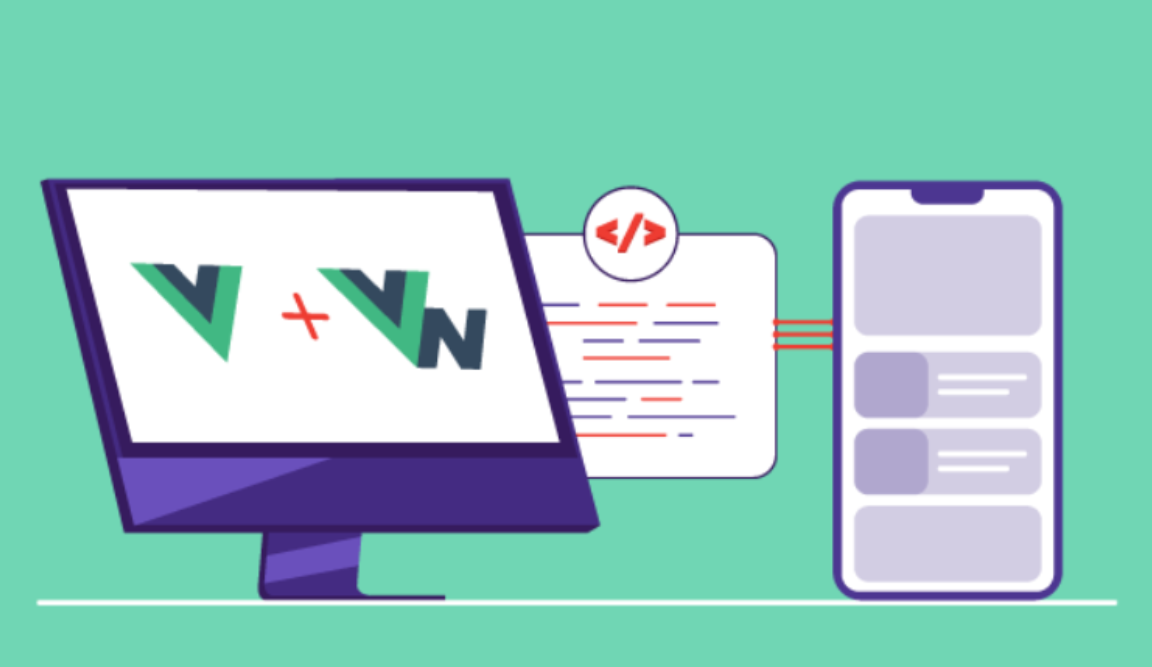 There are several platforms available nowadays; consequently, developing native mobile applications for each of them is both time-consuming and costly. Cross-platform development will be the greatest answer for anybody looking for a less expensive and faster solution.

Historically, cross-platform apps were inefficient and buggy. However, things have changed recently. React Native, created by Facebook, was a game changer. It allowed developers to create high-quality cross-platform programs quickly and easily. The success of React Native has inspired many others to build their own tools for developing cross-platform applications.

Vue.js is now one of the most well-known JavaScript frameworks. It has grown in popularity among newcomers to JavaScript front end programming due to its ease of use. However, front-end developers have encountered a key disadvantage with Vue.js, which is the inability to use it to create mobile applications. That has changed with the introduction of Vue Native. This article will discuss developing apps on top of this framework.

What Exactly is Vue Native?

Vue Native is a “mobile framework,” as every Vue js dev refers to it. It’s used to create mobile applications that leverage the Vue.js framework language. Vue Native is, to put it simply, the framework on which your project will be developed. The “materials” from which we will create all of the associated pieces are represented by Vuejs mobile.

When discussing app development, the term “native” refers to the operating system on which the program is supposed to function. Whereas cross-platform software can run on Android, iOS, and the web, native software can only run one at a time. This is advantageous since it enables the program to operate significantly quicker. However, it does provide some challenges. Speaking of speed, Vue Native’s popularity is partly due to the enormous amount of time it saves by enabling user interface components to be reused for each operating system.

We can create mobile applications using Vue.js and the Vue native and capacitor frameworks. When it comes to bundling Vue code into a mobile app, these two frameworks use distinct techniques. A capacitor is a framework that embeds a WebView component in an Android or iOS mobile app and renders HTML and CSS inside it. On the other side, Vue-Native converts Vue components into native mobile code for each platform. Both systems have advantages and disadvantages, and the choice to choose either must be based on personal preferences.

How to Create Mobile Apps with Vue Native

Vue Native was inspired by React Native and was included in the React-Vue compilation. Developers may create applications using the natively given rich UI components. Because the code is eventually turned into native Android or iOS code, this native framework aids in the development of lightweight applications. Vue native has a plethora of APIs and components, as well as access to device APIs such as the camera and the native share component. It should be noted that Vue native does not build to HTML. It builds mobile components using the Vue framework that can be mapped to native components in each mobile environment. The documentation and resources for React native may also be used to understand a substantial portion of Vue native.

There is also an option worthy of your attention – hybrid app development, which allows you to develop applications that are basically online apps wrapped in a native app shell.

Component reusability is one of the most effective techniques to save development time. Individual components may be flexibly adapted to function across several systems.

NativeScript is admired by software developers for its clarity and brevity since it allows them to write code that is readily understandable. Single instructions may be expressed in a number of ways using the framework.

This JS framework aims to offer more dynamism and simplicity to code, making it simpler to understand. Similarly, Vue.js aims to be efficient without being too complicated. Vue.js also has laconism, which enables users to develop complex software without having to write extensive code.

With a v-model directive, Vue Native allows two-way binding. Any changes to the data are instantaneously propagated to the output, avoiding the need to build extra logic.

Changes to the model are immediately reflected in the user interface. When the UI is refreshed, the model is updated as well. This method shortens the time it takes for a modified UI element to render.

In this post, we discussed the main features of Vue.js and how it can be used to create mobile apps. Vue developers may leverage NativeScript to build versatile and scalable mobile applications that can run on several platforms with the same code.