Bird and Drinkaware Team Up To Prevent ‘Drink Riding’ #escooters 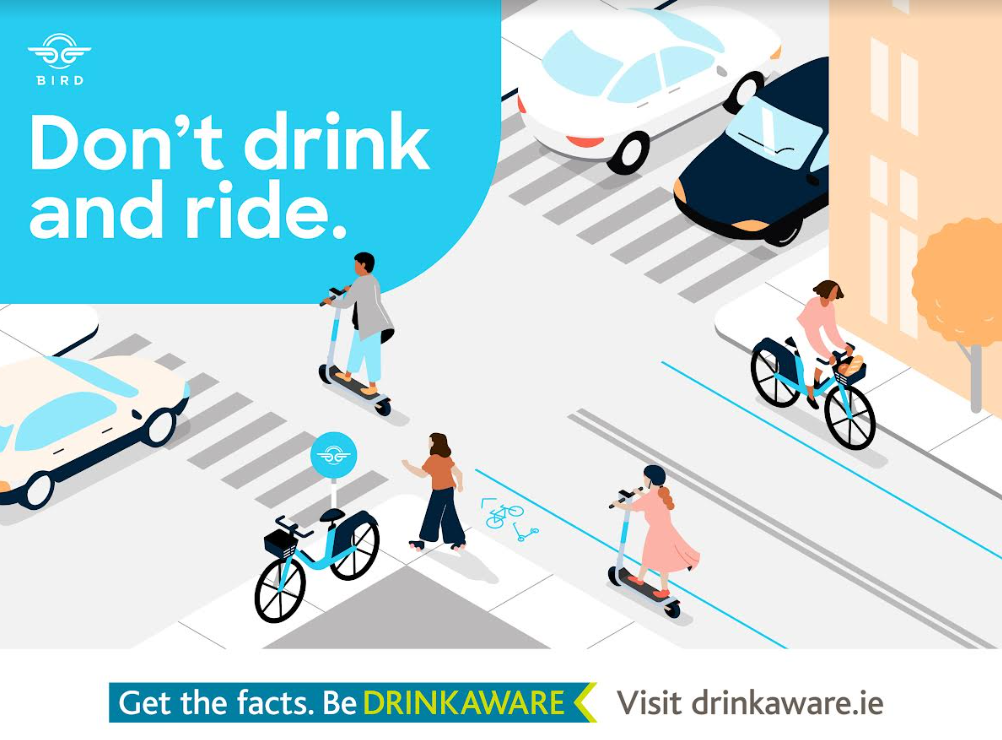 Bird, a leader in micro-mobility, and Drinkaware, the national charity working to prevent alcohol misuse in Ireland, today announced plans to roll out  a public awareness campaign as soon e-scooters are legalised for use on public roads by the Road Traffic and Roads Bill 2021. The Bill is currently making its way through the Oireachtas, and according to the Government’s recent Sustainable Mobility Strategy*, will be in place by the end of this year. The campaign will aim to encourage the Irish public to adopt a safety-first approach to riding e-bikes and e-scooters, and will complement the draft legislation, which sets out fines of up to €2,000 for the consumption of alcohol while using such vehicles.

Campaign imagery encouraging safe riding will soon be visible in cities and towns across Ireland. In conjunction with this, Bird plans to roll-out its Safe Start feature as soon as it launches services in Ireland. This in-app ‘checkpoint’ is designed to discourage people from riding under the influence and is already used by its riders all over the world. Between the hours of 10pm and 4am, riders attempting to unlock a Bird e-scooter or e-bike will be asked to verify that they can safely handle the vehicle by correctly entering a keyword into the app.

International data attests to the popularity and safety of e-scooters and e-bikes, and continues to  show that cars remain the biggest threat to Irish road users, with a documented incident rate of 1 in 20,000 trips. Bikes, e-bikes and e-scooters have a documented incident rate involving medical treatment of less than 1 in 50,000 trips*, but research shows that up to 30% of all cyclist accidents involve alcohol.* Bird and Drinkaware will therefore be campaigning to ensure that the public understands the dangers of using any form of micro-mobility while under the influence of alcohol.

In the meantime, Bird and Drinkaware are urging e-bike riders to avoid riding while under the influence this May Bank Holiday. Any alcohol impairs judgement, making users physically unsteady and impeding their reaction times.

Victoria Springthorpe, Head of Ireland and UK Public Policy at Bird: “Safety is always our no.1 priority and so we’re thrilled to partner with Drinkaware, a leading voice on road safety in Ireland, to educate and prepare people ahead of the legalisation of e-scooters. Sometimes it’s just a case of simply reminding people of the risks, to prevent an unsafe situation.”

Sheena Horgan, CEO of Drinkaware: “Drinkaware welcomes the opportunity to partner with Bird on a campaign that ensures public safety and an understanding of the risks of drink riding. From our interactions with the public we know that there is high demand for information on drink driving, and our webpage on drink driving is consistently in the top 5 pages viewed on drinkaware.ie. New forms of transport are entering our country and we need to ensure that the public are aware of how to use these forms of transport safely and responsibly. The Department of Transport’s draft legislation sets out fines of up to €2,000 for the consumption of alcohol while using e-bikes and e-scooters.  As with other policies regarding other modes of transport, the efficacy of the legislation can be boosted by a supportive public education campaign.”

This is the second safety initiative launched by Bird this year, after the company announced a partnership in January with the Irish School of Excellence, Ireland’s largest driver education programme, to establish Ireland’s first E-scooter Safety course. This course is set to be rolled out across Ireland when the Roads Traffic and Roads Bill 2021 becomes law. Covering almost 80% of schools nationally, it will have a wide reach and provide pupils with an overview of the law governing e-scooters; a guide on how to ensure pedestrian safety while using e-scooters; tuition on starting and moving off safely, as well as a tutorial on how to park safely.