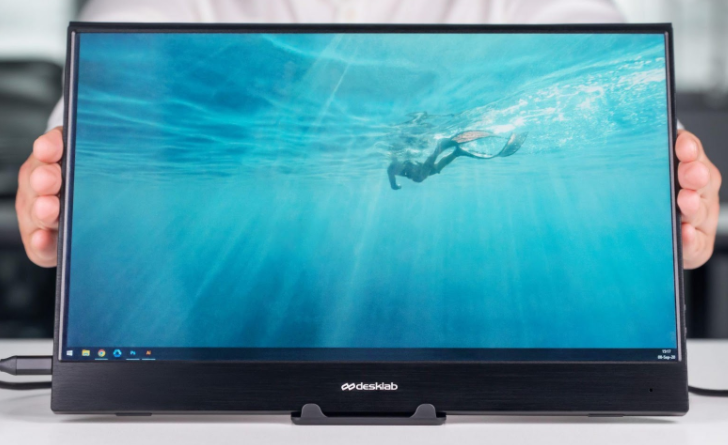 With many people switching between remote and office work, it isn’t easy to find computer setups that have everything you need. Monitor space is at a premium these days, so an additional monitor is always handy. But when you constantly travel, why choose a stationary, bulky screen? Portable monitors might sound like a subpar deal, but emerging technological improvements have made them better than ever.

The DLab monitor, from the relatively unknown Desklab brand, is one of the more surprising lightweight touchscreen monitor models we’ve encountered. It has extremely respectable specs when considering its price, and you’ll be hard-pressed to find a flaw in its system.

Desklab’s monitor is a handy piece of highly portable equipment. Weighing only 1.3 pounds, it’s lighter than the current iPad. While it can’t work independently like a tablet, most people already have an advanced computing device in their pockets (a smartphone, for example). The monitor’s design exemplifies portability and versatility, with a special focus on ease of use. Its hallmark feature is the PnP compatibility with pretty much any device imaginable, from smartphones and tablets to PCs and even most modern consoles. It also has a mini-HDMI port, two micro-USBs, an audio jack, and a USB-C port, allowing it to function as a dongle to charge other gadgets. It doesn’t contain a battery, so make sure you pack a full charge on whatever you plan to use it on. It doesn’t drain the battery as such, but the drain will add up over time.

This is also a touchscreen monitor, although you have to plug a touchscreen-enabled device for this feature to work properly. You won’t magically turn a mouse-and-keyboard setup of a desktop PC into a tablet while using this monitor, although there might be software for that. The monitor works best when paired with a stylus-enabled laptop or tablet, allowing you to use the beautiful 4K resolution, 15.6-inch screen to its utmost advantage. Due to the native touchscreen support and tablet compatibility, this is probably the best monitor for designers who use a stylus or other touch-enabled functions to for their creative work.

Did we mention this monitor works seamlessly with consoles and mobile devices? This is a great way to turn a mobile phone into a mini gaming rig when on the go and enjoy some games in never-before-seen large-screen format. The monitor has an anti-glare coating and is extremely bright, allowing you to see everything perfectly without tiring the eyes, which can be a genuine concern for people working long hours staring at the screen.

Overall, this PnP portable monitor is mighty powerful indeed. While it can’t outperform the best gaming monitor models on the market, those will probably cost a fortune anyway. The DLab monitor is surprisingly cheap considering its insane (in a good way) specifications. Plus, it’s sometimes on sale to sweeten the deal.

If you need a second monitor to jump-start your work productivity or set up a streaming system, or just want to have a mobile workstation wherever you travel, the DLab monitor might just be your best investment. Check out its specifications at www.dlmonitor.com