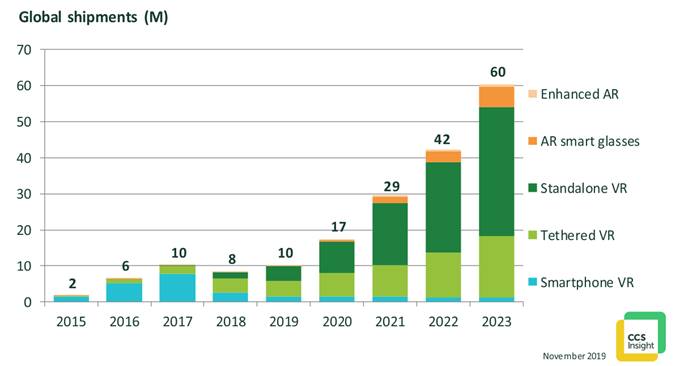 The market for extended reality products, which comprises virtual reality (VR) and augmented reality (AR) devices, will enjoy 21% growth in 2019, to slightly more than 10 million devices, according to the latest forecast by technology analyst firm CCS Insight. Marina Koytcheva, vice president of forecasting, notes, “Although this growth rate might seem disappointing for a market that has had so much hype, it should be assessed pragmatically. Right now, there are still just a handful of successful devices, and a lot rides on every new iteration or new model brought to market by the established players Sony, HTC and Oculus”.

CCS Insight believes that Sony is on track to record a solid 2019, and Facebook has also started gaining meaningful revenue from its Oculus devices. HTC, however, despite leading in the premium end of the market, looks set for less growth in 2019. But Koytcheva notes, “It’s still early days in the nascent VR market and I have positive expectations for this exciting product category”.

The recently published forecast projects that market demand will grow sixfold to 60 million units in 2023. Leo Gebbie, senior analyst at CCS Insight, covering wearables and extended reality devices, explains, “Our optimism is supported by our consumer research of early technology adopters: those who don’t yet own a VR device show a strong willingness to buy an extended reality device within the next three years, particularly as more attractive and affordable products with richer content and experiences become available. I believe this is particularly good news for entry-level devices like the standalone Oculus Go headset, which retails at less than $200”.

CCS Insight also notes that the variety of VR devices is growing. The company expects new products in 2020 from Oculus, HTC and others, including the highly anticipated Sony PlayStation 5, which is widely expected to be accompanied by an updated PlayStation VR headset.

A further boost to the VR market is coming from the advent of 5G mobile networks. In South Korea, currently the most advanced 5G market in the world in terms of adoption, mobile operators have successfully positioned 5G as a technology that can deliver an attractive VR experience. “Operators in other markets should be encouraged by the success of their South Korean counterparts, and we expect more consumer offerings to be built on the coupling of VR and 5G in the near future”, says Koytcheva.

China will also play an important role in the growth of the VR market. The Chinese government’s initiative to be a global leader in VR and AR technologies by 2025 will have an impact in the near future. Education is being targeted as one of the major sectors where VR should be adopted. This tallies with CCS Insight’s prediction that extended reality will become a standard educational tool in schools in at least two countries by 2025.

“All these trends support our view that the VR market is just heating up. Some quarters will be better than others, but the direction of travel is onward and upward”, concludes Koytcheva.

When it comes to AR, adoption by business users is picking up, although the numbers are currently very small. CCS Insight expects about 150,000 AR devices will be sold globally in 2019.

Adoption of AR devices in logistics and remote assistance continues to rise, and other industries are also starting to follow suit, with important vertical markets such as medicine, entertainment and travel beginning to show signs of growth. Importantly, end-to-end AR solutions, consisting of hardware, software and support, are also improving, making adoption much easier than it was a couple of years ago.

The consumer market for smart AR glasses, however, is still a few years away. Gebbie comments, “We’ve seen some very exciting products starting to emerge, but they’re generally prototypes or early iterations of future device designs. It will be some time before mass-market products capable of delivering significant volume hit the market”.

CCS Insight also notes that component miniaturization remains a major challenge. Unlike warehouse workers and other enterprise users, consumers are unlikely to be willing to accept anything heavier than and much different in appearance from traditional eyeglasses in their everyday lives. However, Gebbie concludes, “We’re confident that this technology will improve rapidly, and predict that by 2022 a major consumer electronics brand will enter the consumer smart glasses market, opening the gates for strong growth in years to come”.

More details of CCS Insight’s extensive VR and AR research service can be found at: https://www.ccsinsight.com/research-areas/virtual-and-augmented-reality/

How AI Will Affect the Future of Work