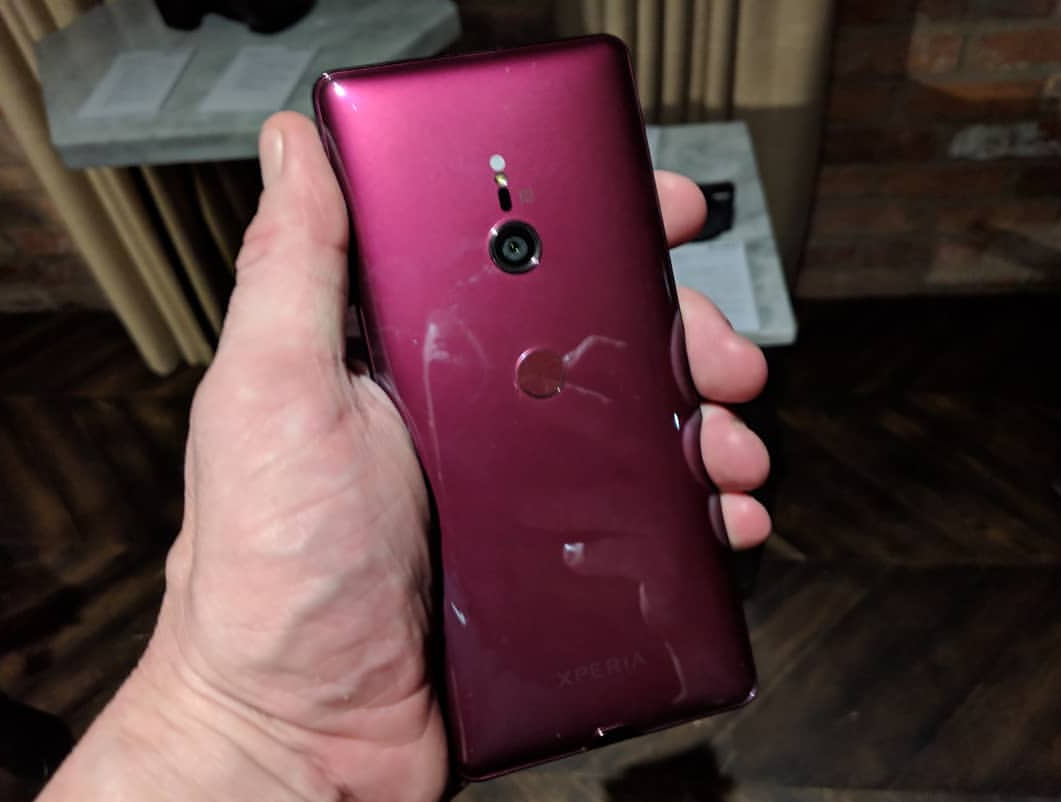 Sony has kept its current design in the new Xperia XZ3 and even though its slightly longer they have reduced the weight by 5g and thickness of the phone 1.2mm from the previous Xperia XZ2 it feels lighter and very balanced in the hand.

As the rear of the phone is made from Corning Gorilla Glass5 it can feel a bit slippery in the hand so a case would be recommended. A case also makes finding the rear finger print sensor easier as I found its position is a bit too low. The beveled edges on the rear of the phone make it look very premium.

Sony has still kept its camera to a single 19 Mega Pixel camera sensor also on the rear is the NFC sensor, the camera led flash, laser auto-focus sensor and an infrared color sensor.                                As with other Sony Xperia’s it has a dedicated camera button on the side of the phone, along with the power button and volume rocker. A handy feature is that the sim-card and micro sd tray can be pulled out without the need for a pin or special tool.

On the front there are the two front facing speakers, USB-C port but no headphone jack as is the norm these days. The Xperia XZ3 is rated for IP65/68 so its water-resistant and dust-proof, so no need to worry if it gets wet.

Again Sony has plenty of options in the Display settings so you can get the most of out that OLED Screen with options Night Light which tints your screen amber making it easier to look at your screen in dark conditions.

Sony have also included a nifty feature called Side Sense which uses sensors at the side of the screen to bring up a menu of your most used apps and Settings, I found this quiet a useful feature as you didn’t need to swipe back into the main menu to goto your apps.

As the screen is OLED there is plenty of options in the settings that you can select, you can choose to have it always on or configure when you want the screen to turn on i.e. only activate the screen when the phone is lifted so you can see the time and notifications that you have.

The Xperia XZ3 has plenty of Sony’s Audio tech like Hi-Res Audio,LDAC, DSEE HX, ClearAudio+ and “S-Force Front Surround Sound” speakers. Again it has Sonys “Dynamic Vibration System” which gives you something of a vibration rumble feedback on sound, something I found more handy when playing games instead of watching movies or listening to music.

As there is no headphone jack you will need to use the included adapter if you want to use your wired headphones or instead use USB-C wired headphones.The front facing Stereo speakers I found to have quiet a punch and didn’t distort the audio even at high volumes.

Sony have stuck with the same 19Mp Motion Eye single-lens camera that was on the Xperia XZ2, but they have improved the camera app with some nice features like having an icon for the previously used mode on the bottom of the screen. The integration with Google Lens is a good feature I found copying text from documents to be quiet a handy feature.

The default camera AI mode does a good job changing the settings for your picture automatically, so you don’t need to modify white balance and ISO etc.

There are other modes like Panorama and AR effect where you can add virtual animations to your photos like Dinosaurs or Superheros it’s a nice gimmick. The Smart launch feature which detects when you lift up the phone horizontally and opens the photo app, I found it hit and miss and I was quicker opening the app via the dedicated camera button on the side of the phone.

To help you get the perfect selfie Sony have bumped up the front camera to 13 Mp and have  added a new Portrait Selfie Mode where you have options like Slender Face, Skin Brightness, Soft skin and Bokeh which blurs the background. Even in lowlight conditions I found the selfie pictures aren’t too grainy.

In the video mode you get the usual options on how you can tweak your settings, enabling Steadyshot did a good job at keeping the video smooth even when your moving around.

The battery capacity in the Xperia XZ3 is 3300mAh it also supports Qualcomm Quick Charge 3.0 (compatible charger supplied in the box) and Qi Wireless charging.

Sony also have their own tweaks to the battery that they call Stamina Mode which disables some background processes to make your battery last longer.

There is also a Battery Care feature which learns your battery charging patterns and for example if you charge your phone every night, it would slowly charge the battery during the night up to 90% then the hour before your wake up it fully charges the phone up to 100%. In my tests I was getting nearly 2 days of usage from a full charge.

The Xperia XZ3 runs Android Pie 9.0 out of the box, Sony has its own lightly skinned version of Android. I found the user experience very snappy as it has a Qualcomm Snapdragon 845 processor running with 4GB of RAM and 64 internal storage.

I noticed that downloading and uploading over Wi-Fi seems faster on the phone.If you have a Playstation 4 and you install the PS4 Remote Play app on the Xperia XZ3 then you can connect to your PS4 if the phone and PS4 are connected to the same network.

Three also have a limited time offer of a Free pair of Sony SBH90C High Res Audio earphones worth €189.99 when you buy online (While stocks last.)

And will be coming to Eir soon. From Sony Direct https://estore.sonymobile.com/ie/sony-xperia-xz3-liquid-black-uk-ie-312305/