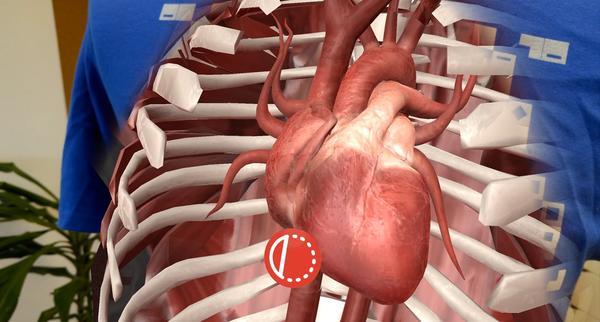 Of late the VR scene has died and people are more so focused now on AR which is a different approach but one which requires no headset or cardboard stuck to your bonce but they are very useful ideas and its a shame to see the VR interest dive so much over the last year and being a huge fan of it I hope it turns around, There is though some things going on and its in a good sector to and moving away from the norm. Science and health is a great place to apply both VR and AR and this T-shirt does this and all you need is your smart phone and if you have a VR headset its an added bonus for a much closer look at things.

What I really like about this is its simplicity and how much your child and you can learn with just a t-shirt, Yeah a t-shirt, and a smart phone which every household would have these days. It’s also simple to set up and better again it can be shared to a large audience for free which is cost-effective for the masses.I have tested a unique VR headset which was primarily aimed at the classroom before but this cost money and each child had to have the same equipment and that was some 250 quid where this t-shirt is buttons compared to cost.

Once you download the app you just go through some simple set-up processes as you would do and its point at the t-shirt and let the magic happen its that simple. You can wear the t-shirt or your child or place it on a doll or bear should neither want to wear it to begin with to get the workings of it going but its really straight forward as seen in videos above and below..

To simply point your device at an object and get the anatomical working of the human body right there on your phone is quite unreal and it shows how far things have come over the years and its not done in a gorey fashion either as one might think. Its really enjoyable and fun to watch and also educational for any age,not just kids and as mentioned above you can get in deeper by using a VR headset or cardboard offering and jump in deeper and there is a friendly voice over to describe what is going on too which makes it really relaxing and enjoyable.

“We’re super excited to get this product out to the public at scale and continue our pursuit of bringing magic and wonder into the world around us, literally bringing learning to life. It’s an incredibly exciting time for AR and Mixed Reality and we’re excited to be at the forefront of making these technologies accessible to everybody,”

The new investment has allowed Curiscope to launch The Virtuali-Tee globally and develop further product lines across AR and VR. With the launch of IOS11 and ARKit by Apple, bringing positional AR to over 200m devices, a number of new products will be announced across the final quarter of 2017, further cementing the position of Curiscope as leading innovators in the mixed reality space.