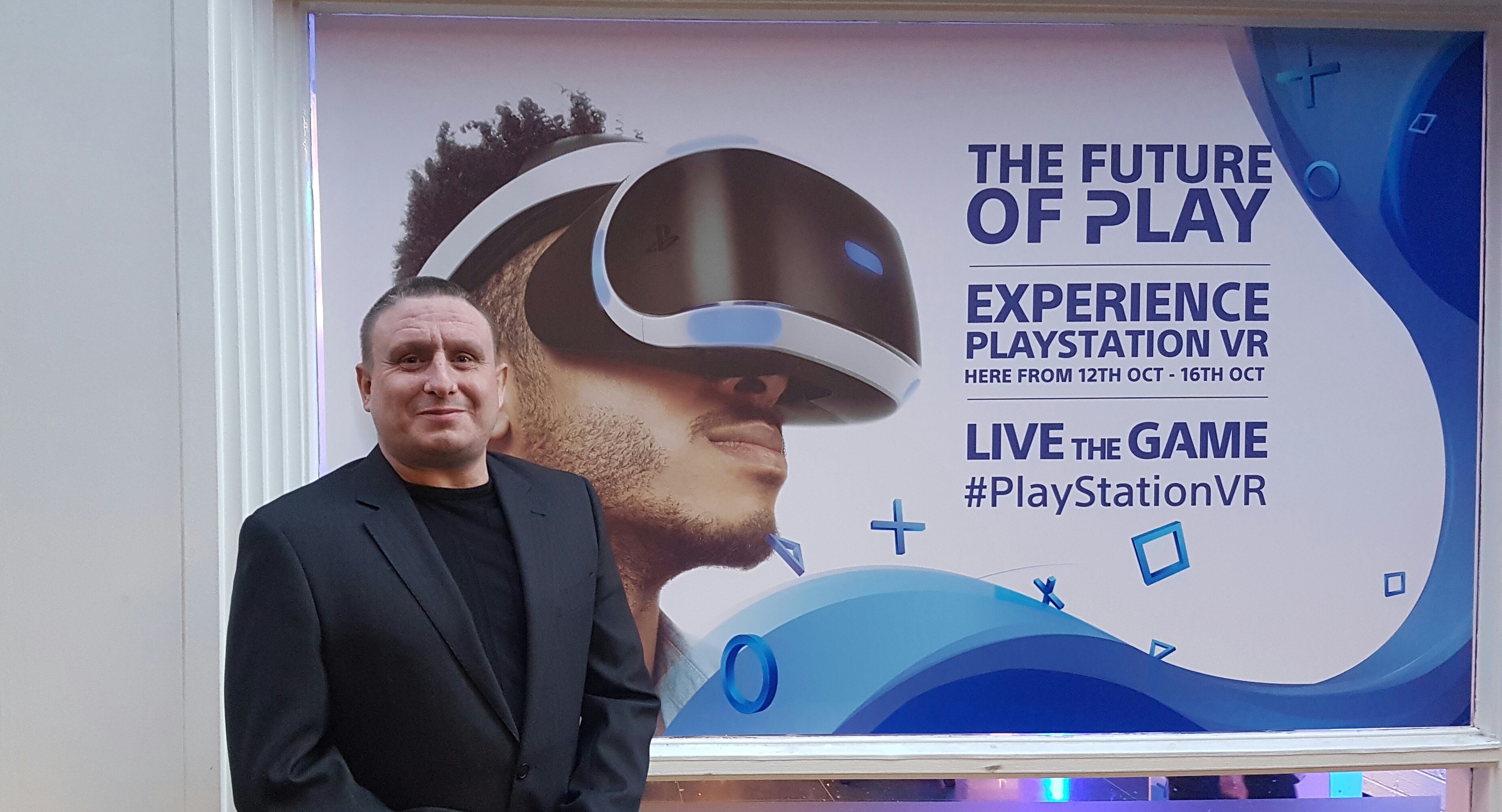 Last night we attended the Irish Launch of the much anticipated Sony PlaySation VR headset,Being big fans of VR here it was a great event in a great setting with plenty of demonstration units to boot ensuring plenty of fans and media alike could test out the latest VR headset to the market and it certainly has me sold after trying a few games it truly is an immersive experience and PS4 owners alike will not be disappointed given its got a €400 price-tag..  Unlike other competitors in the market offering this kind of experience which requires really expensive hardware if you’ve  got a PS4 you are good to go…

Credit to joe.ie for featuring myself in the video

PS VR, which is compatible with the more than 40 million PS4 systems already inside consumers’ homes, arrives with a lineup of 30 games, including exclusive titles such as Rez Infinite (Monstars & Enhance Games), Batman™: Arkham VR (RockSteady and Warner Bros Interactive Entertainment), DRIVECLUB VR and RIGS Mechanized Combat League (SIE Worldwide Studios).  In total, PS VR will have a library of approximately 50 games by the end of the year.

As mentioned there was plenty of demonstration units available to give multiple people a chance to try the headset which did not leave you waiting long to take your turn.. There was also some nice snacks at hand and the staff where excellent and took time to speak to you and get your view on the product,we also did an interview with one of the other media outlets on site.

Next up Oisin gives us an overview of the set up and what is involved,this guy was excellent and spent some time with us giving us demos and talking us through the process and was there at hand should you need it,trust me some experiences did nearly make me fall off the seat.. This is really immersive… Having tried tested and now owning around some 20 VR headsets personally this is something you must try,with a good platform to build on and with gaming still very popular here in Ireland and all over the world they are setting off on the right foot…

“We are incredibly excited to bring virtual reality to PlayStation 4,” said Jim Ryan, President of Global Sales and Marketing, SIE and President of SIEE. “PSVR puts the player right in the centre of the action, immersing them in extraordinary new worlds. PS VR is a milestone in home entertainment and it very much needs to be experienced to be believed”

The headset itself is not so big nor is it cumbersome and fits comfortably around the head, but it does take getting a minute to comfort yourself with it and whilst holding the move its feels a bit weird holding them for the first time when you cant see a thing but Oisin was there to help out with the set up process and guide us through what needs to be done which after a few moments was easy and oh boy its a great experience…For me I kinda lost interest in gaming a few years ago probably due to age but this is on another level it’s simply a great experience and much better than anticipated..

PS VR delivers a sense of presence, where players feel as though they are physically inside the virtual world of a game.  PS VR leverages state-of-the-art technologies, such as 360 degree head tracking, wide field of view, high refresh rates, and SIE’s own binaural 3D audio technology, to heighten the emotions gamers experience as they play and make them believe they’ve been transported to another world.  By using peripherals such as PlayStation®Move Motion Controller, DUALSHOCK®4 Wireless Controller and the upcoming PS VR Aim Controller, players can explore virtual environments and intuitively interact with characters as if they are actually present in the world of a game. PS VR integrates a “Social Screen” feature that allows users who are not wearing the VR headset to see on the TV what the PS VR player is seeing in the headset, or to play alongside the VR player in supporting games.

Its the one and only @bazashmawy who told me he really likes this and he also enjoyed the night and was great to have a chat with him for a few minutes, Really nice guy..

Check out below  some more clips of the action and then hop down to the image gallery below We tried out several of the games at hand but not all but the experience was fantastic overall and there will be one of these headset heading into techbuzz headquarters very soon..London Heist was probably my favourite where you get to sit beside a bad ass driver with quite a few rounds of magazines and a gun and fire to your hearts content shooting the baddies,this was really immersive and using the Move controllers to do things like you would in real life was an amazing experience. Any questions fire away in the comments section or hit us up on social at @techuzzireland and we will gladly answer any questions you may have. We would also like thank all involved with the event and it was a well run night it has to be said.. Dont forget this goes on sale this Thursday, 13th October. Check out Playstation VR for more.. If you pick one up feel free to send in your thoughts to us…

Games such as PLAYROOM VR (SIE WWS), which will be available as a free download to all PS VR owners, take advantage of this feature and demonstrate how PS VR can create unique multiplayer experiences when shared with friends and family.

Image gallery of the night

Irish gamers have the chance to be first to explore virtual reality gaming, with a pop-in gaming centre open for hands-on PlayStation®VR demos. The Dublin City Centre pop-up is open each day, Wednesday 13th to Sunday 16th October. Avid gamers or just the VR-curious can book a slot for PlayStation®VR demo on games including Battlezone, Rigs, VR Worlds, Headmaster and Eve Valkyrie. To book a slot go to: http://www.trypsvr.com. Walk in slots available and players must be over 12 years.

SIEE Territories for launch on January 24th,2017 include: Kuwait, Qatar, Bahraim, Oman, S Africa, Turkey & India, Hungary, Slovenia, Croatia, Bulgaria & Romania, Ukraine and Kazakhstan, Israel, Cyprus, Malta and Iceland
*2 Information as of October 13, 2016. Release titles may differ according to country/region. Release dates may be changed depending on individual titles.
*3 Number as of October 13, 2016.
*4 Star Wars™ Battlefront is required to play the mission
*5 Entertainment apps availability will vary by regions. Users are responsible for applicable service fees.