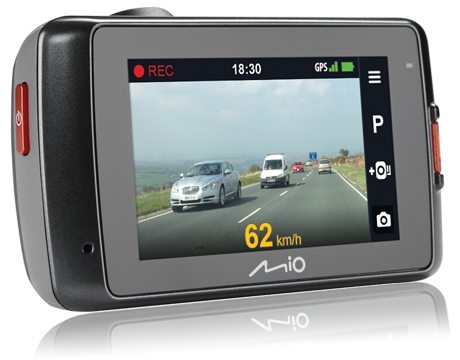 Over the last few years dashcams have become hugely popular and some insurance companies encourage you to use them.. They are handy for in other ways such as catching thing on film that you might not to expect to happen and this proves so with the amount of footage of things popping up on you tube for example but the reason they are designed for is for your protection namely with car accidents. This is something perhaps that will come standard in vehicles someday and will assist in the decline in insurance prices because as of now in Ireland we are being fleeced with insurance quotes due to the rise in claims. Such products would help in this situation and most people have that do have them just have one in their front window.. Think of the difference having one fitted front and back as standard, this would change things for sure..

The Mio MiVue 688 is a nice example,there is plenty out there with starting prices from €20 and up but the saying you get what you pay for should be took into consideration here,this particular model costs about €150 which might seem expensive for some but quality is key here rather than say a Black and White one that records and so on this model is full colour with 1080p HD Recording at 30fps with a Sony sensor on board and we have GPS which is nice….

The packaging comes as you would expect,boxed,plenty of info on the external and some nice pictures to complement what is inside..

Inside you then find the unit itself with a window mount by means of a suction cup and a cable to charge the unit in your vehicle of choice,it uses the old USB so the charger is proprietary to the unit,not todays standard which is micro USB. You charge via the cigarette lighter which again is now being phased out by USB ports which from what i have seen so far offer poor charging and just a trickle. Im sure there is better out there depending on the manufacturer.. There was no Micro Sd card nor separate cable to hook up to your PC or Laptop,would have been a nice addition though..  Of course there is the tonne of literature to accompany the product which YOU WILL need to read..Not like the ones we get with our phones or tablets and toss them back on the box..

The build quality is excellent and robust so it would handle a drop or two should you happen to drop it perhaps if you are switching cars there is a few buttons on the right hand side and one on the left which is the power key, these are all labelled within the user manual i mentioned earlier which you will need to read… Underneath is the micro sd slot,you will need one with large memory if you are going to be a heavy user,It would not read 64MB cards but anything over that it did.. On the back there is also a speaker grille, One thing here which seems old fashioned here is the connection port,you get the charger in the box so if it gets lost or damaged you will have to find another this should have been micro USB plus there was no cable provided in box to make transfer process easy so you will need card readers or if your laptop has this function built in..

Before using the unit insert your sd card then mount it to the window or where suits you best,the unit is small and not cumbersome and does not obstruct line of view,You will be given a safety warning when turned on first which would be expected after that you can then go through the settings and select what operation you require,If your card is low on memory a warning will pop up and tell you some recordings will be overwritten…Big card folks the bigger the better if you are a heavy user,keep that in mind… You can use without card but time and speed is all you will get,having used it speed was consistent with cars own speedometer

Quality on screen is good and reproduces the visuals quite well, The mounting is also solid it did not fall off the window once fitted, I tried this in two vehicles and again no problem, Features on the unit then to note from here are Safety camera warnings,this varies by region though GPS tracking,Lane departure warnings, Wide angle viewing 140 degrees, 3 axis sensor that records direction and force,Parking mode,Photo mode,Speed alarms and Add new safety camera.. Sound recording and file playback… Its not a touch screen folks but the keys on the sides are tactile and easy to follow onscreen instructions should be no issue…

Its an idea kit to have in your car these days due to the rise in insurance costs,there is now a rear view camera available from the company which again helps. Its compact and easy enough to follow instructions though a touch screen version would be nice these days due to the way most in car tech is now becoming. What I personally didnt like was there was no transfer cable included in box and that it uses USB mini B which is old,some continuity would be nice with what we are all use to these days akin to smartphones and tablets etc….However its not an major gripe to fault it nor should it swing your mind to opt out of purchasing one…..