Deliveroo Ireland announces a year-long partnership with FoodCloud – it is using its technology to enable customers to add a round-up donation to the charity while ordering food in-app. 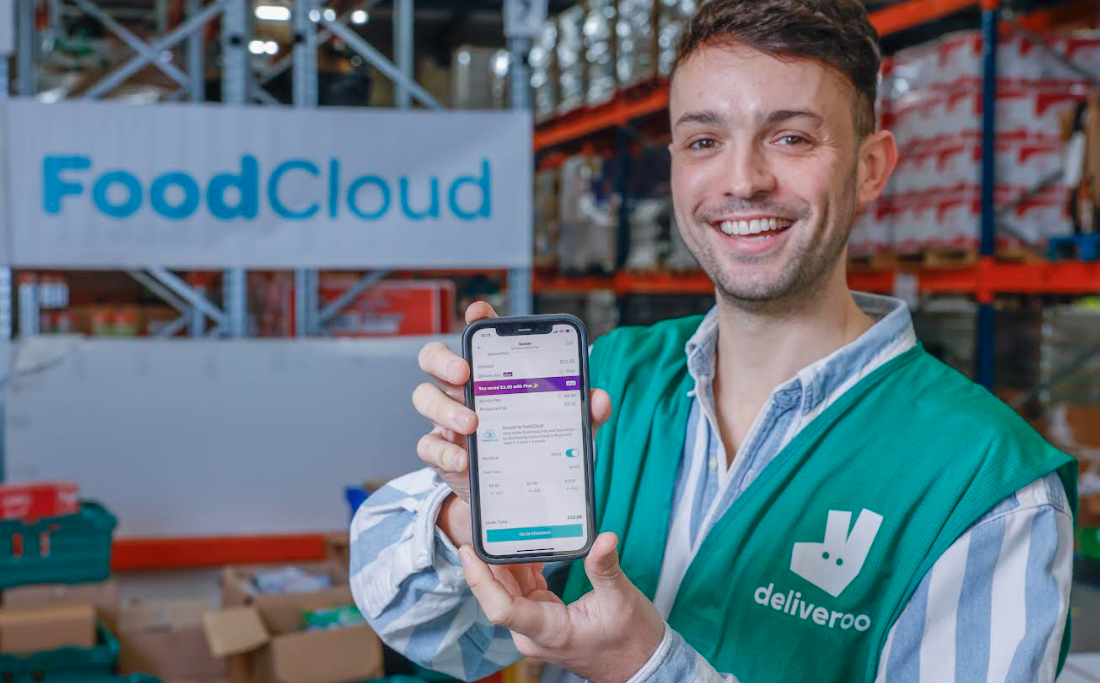 Deliveroo Ireland has today announced a year-long partnership with FoodCloud – which will see the food delivery company fundraise on behalf of the food waste and food security social enterprise who were recently named Charity of The Year for their work redistributing surplus food to their network of charities across the country.

As part of its Full Life campaign, Deliveroo is enabling customers to add a round-up donation to their in-app food orders, with all proceeds going to FoodCloud to tackle the twin issues of food waste and food insecurity.  Deliveroo, with their customers, will raise funds to provide up to 500,000 meals, which will be distributed to FoodCloud’s network of more than 600 charities and community groups over the course of 2023.

This partnership comes as new research from Deliveroo reveals that people in Ireland remain generous givers to charity despite the cost of living crisis – only 22% would consider cutting back on charitable giving to save money. The Irish public are more likely to spend less on clothing (49%), leisure activities (40%) and travelling by car (32%) to save money. In addition, 1 in 3 (33%) of the Irish public would be more likely to donate to charity if they were presented with a simpler, more convenient, way to make a donation. Donating through the Deliveroo app couldn’t be easier – Deliveroo customers need only to round-up their order to the nearest euro when paying for their takeaway or groceries. For every €1 raised, 3.2 meals will be provided to people facing food insecurity.

Through the partnership, Deliveroo is aiming to save 210 million tonnes of food from going to waste, which will prevent 675 tonnes of CO2 emissions from entering the atmosphere and damaging the environment in the process. With sustainability being a priority at Deliveroo,  the company is committed to playing a role in reducing food waste.

Working with Deliveroo to raise awareness of the partnership, TV presenter and food influencer, James Kavanagh commented:  It’s no secret that I’m pretty obsessed with food, so I am really pleased to play a role in raising awareness of the amazing partnership between FoodCloud and Deliveroo. This campaign will stop good quality surplus food from going to waste and help so many people who are struggling, which has never been more important. It’s so easy to support through the Deliveroo app – just a few cents will make such a difference, so next time you place an order, remember to round-up to make a donation!

Partnering with FoodCloud marks the next phase of Deliveroo’s Full Life campaign and its longstanding commitment to supporting local communities, following the company providing thousands of meals to people in need through a partnership with the Dublin Simon Community last year and its work to raise awareness of the Women’s Aid helpline working with the Deliveroo rider fleet.

Paddy Quinlan, Senior Regional Manager, Deliveroo Ireland commented: “Since we launched in 2015, Deliveroo Ireland has worked hard to make a positive contribution to the communities in which we operate. We are proud to be building on what’s been achieved so far and our partnership with FoodCloud, one of the most impactful charities around, will provide thousands of meals to those in need across Ireland.”

Iseult Ward, CEO & Co-Founder, FoodCloud said:  “We are delighted to partner with Deliveroo on its Full Life Campaign, an initiative on their platform to raise awareness on the twin issues of food waste and food insecurity that enables customers to make a donation to support our work. Investing in our work to redistribute food that might otherwise go to waste, ensures good food gets to people and families at a time when they are facing unprecedented levels or economic hardship while protecting our planet and reducing greenhouse gas emissions.”

The round-up charity function in the Deliveroo app can be found when customers go to pay for their order. Customers can round-up their order to the nearest euro. For more information on the round-up function and the Deliveroo Full Life campaign, head to: https://deliveroo.ie/more/full-life-ireland.