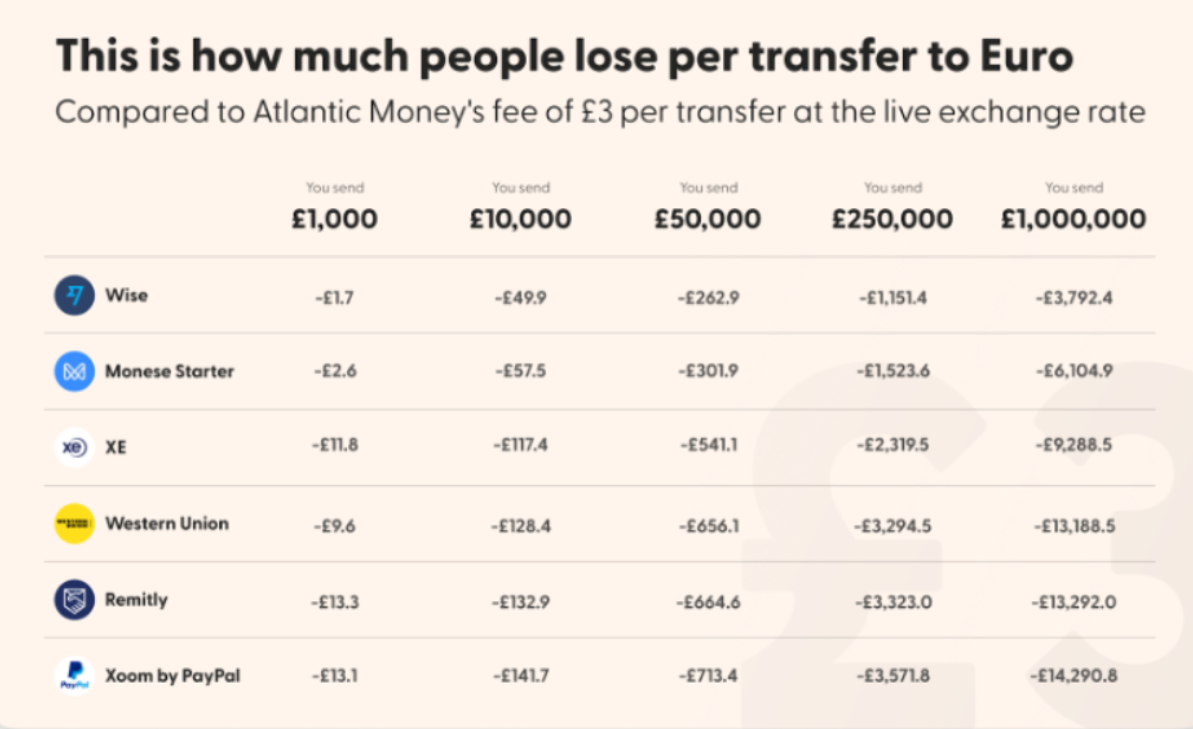 New international money transfer provider, Atlantic Money, today announces its official launch in Ireland, continuing its expansion in Europe after Belgium and Germany. For the first time, consumers in Ireland can make international money transfers for a fixed fee of €3 at the current exchange rate for transfers up to €100,000. The low-cost transfers can be made via the Atlantic Money iOS App.

The firm, co-founded by Patrick Kavanagh and Neeraj Baid, early employees at trading giant Robinhood, drastically undercuts established providers, such as PayPal, Revolut and Wise. For example, someone sending €3,500 to GBP would see at least 75% savings, with larger transfers up to 99% cheaper. Despite the cost of sending money internationally being largely fixed per transaction, these providers have a variable pricing model meaning the more you send, the more you pay.

Atlantic Money’s app is the most simple, slick and cost-effective way of moving money across borders. Users simply download the app, go through a one-minute verification process, and can immediately begin transferring money. They can select standard delivery or opt for express delivery for a small additional fee of 0.05% – a €1,000 express transfer costs just €3.05.

“The first generation of cross-border payment fintechs did a great job initially, but their flexible pricing models penalise people that have to send significant amounts of money abroad regularly and they’ve lost focus in their quest to build the next superapp. We are disassembling this approach by being laser-focused on doing one thing better than anyone else – getting people’s money from one currency and country to another, as efficiently as possible. We are grateful to our current and new investors for their continued support and excited to provide consumers in Ireland with a best-in-class customer experience and unmatched cost savings.”

“We are already seeing some fascinating use cases and delivering substantial cost savings for our customers. For example, one of our customers transferred €100,000 to GBP which arrived in minutes for the price of €3.05, a 99% saving compared to Wise or Revolut.”

Atlantic Money was founded in 2021 and has been operating in the UK since March 2022, where it is regulated by the Financial Conduct Authority (FCA). In June, the company received its official EU licence from the National Bank of Belgium (NBB), the first company to do so in a year, and will soon launch in other European countries besides Germany and Belgium.

Atlantic Money is backed by investors Amplo, Ribbit, Index Ventures, Kleiner Perkins, Elefund, 20VC, Day One Ventures and the founders of Robinhood, who invested a total of USD 7.5 million in the seed funding round.

Atlantic Money is currently available as an iOS app. Android will follow in the coming weeks.