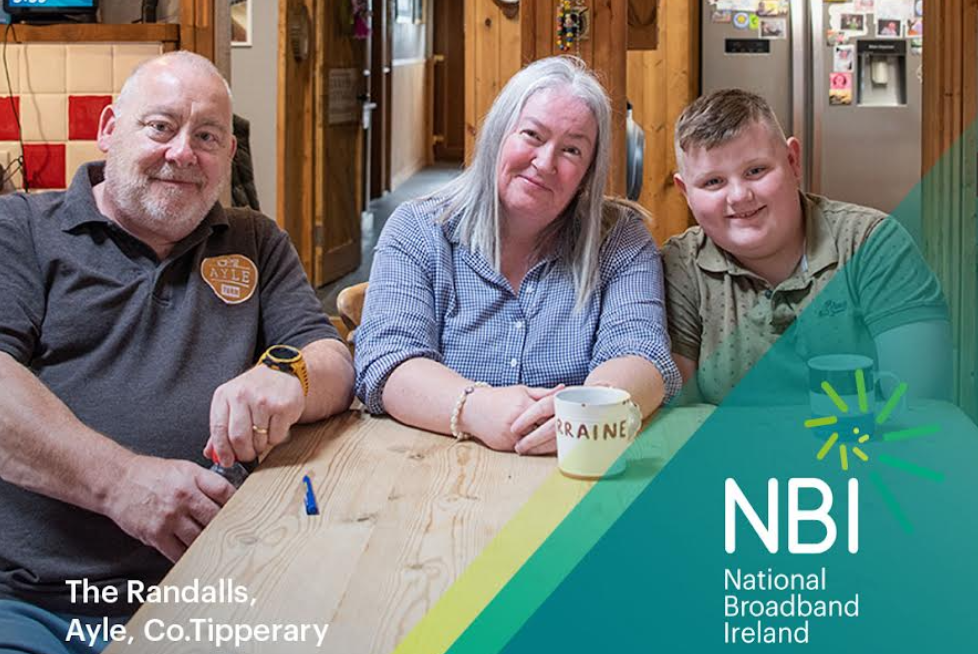 The campaign is part of NBI’s commitment to create limitless opportunities through connectivity and access to high-speed fibre broadband for those living in rural communities, where such services are not available commercially. The campaign is running across social, digital and VOD channels including: RTE, Virgin Media and Channel 4.

The videos show the positive impact that high-speed broadband has made for both the Curley family and Randall’s, who have seen massive improvements in internet speeds, and also experience benefits for family’s life, business enterprises and careers.

Peter and Lorraine Randall in Co Tipperary, bought Ayle Farm in 2005 and produce award winning artisan chutneys, granola, and more in small batches. One of the added benefits of the installation of the fast speed solution by NBI, is the security aspect for rural businesses and enterprises. Peter Randall is able to access alerts and live feeds across the farm, “which are things we could never do before”, he says.

Lorraine Randall explained how access to high-speed broadband has meant she could begin working for a global company as one of the conditions was access to “good internet speed so I could work from home”, she remarks.

In the new post-pandemic era of remote working, The Curley Family in Co. Galway echo this sentiment stating that they are saving almost 2 hours of a commute each day by working remotely – leaving more time for family, activities and the children. On the video we see the Curley family describe that “back in March 2021 our download speed was 1.35Mb and in 2022 our download speed is now 640Mb – we now know what a true internet connect is”.

The Campaign development has been managed by Pauline Broderick, Head of Marketing at National Broadband Ireland, who says:

“NBI is delighted to launch  the first phase of our new advertising campaign, illustrating  the real-life impact of high-speed fibre broadband on the well-being and quality of life of those families involved. The aim of the campaign is to allow NBI’s end users to describe their own experience of gaining access to the fibre network, enabling families throughout Ireland to become multi-device households, and to ensure businesses can make use of new technology and open up economic opportunities in the future.

Overall, 1.1 million people living and working in almost 560,000 premises, including almost 100,000 businesses and farms, are set to benefit from access to the broadband network being rolled out by NBI under the National Broadband Plan. The videos give a small glimpse into the real-life experiences and upsides, as a result of the high-speed broadband connections.”

NBI is the company rolling out the new high-speed fibre broadband network under the Government’s National Broadband Plan (NBP). To date, a total of 18,592* premises – including homes, schools, businesses and community facilities – are now connected to NBI’s network, meaning that these premises now have guaranteed access to minimum broadband speeds of 500Mb.

The campaign reflects National Broadband Ireland’s strategic approach to transform Ireland’s broadband landscape. The plan is to deliver quality, affordable high-speed broadband throughout Ireland including areas where such services are not available commercially.

“There has never been a more appropriate time to introduce high speed fibre broadband in rural Ireland. During the pandemic, many families were forced to rely on their internet connection to complete daily tasks such as working remotely, home schooling and other daily roles. Remote and hybrid working is still a factor to consider for homes and businesses meaning high-speed fibre broadband is still a requirement in these rural areas. At National Broadband Ireland, we are committed to connecting families, homes and businesses to the network throughout the country.”

Buymie to expand outside grocery vertical with Woodie’s partnership