The current status of Derry casinos 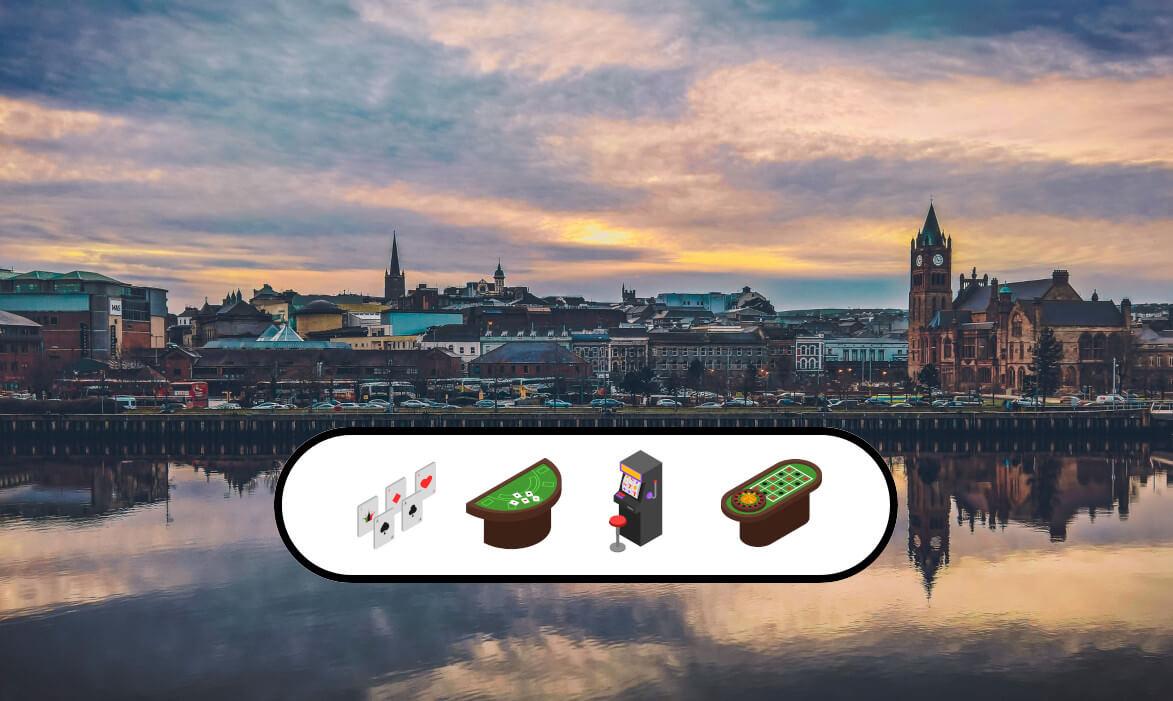 Anyone in the city of Derry might be wondering what’s the current state of play regarding casinos. Why do the rules differ so much from the rest of the UK?

Well, in line with much of the governance of Northern Ireland in general, the legal regulations around gambling have been devolved. This means that the Northern Ireland government is free to set rules and regulations that are different from the rest of the UK. This includes gambling at brick-and-mortar establishments and online.

To help clear up any confusion, we will explain the current status of casinos in Derry and what the future may hold.

Land Based Casinos in Derry

There are no brick-and-mortar casinos in Derry at the time of writing. That’s because of The Betting, Gaming, Lotteries and Amusements (Northern Ireland) Order 1985.

This legislation makes it unlawful to have prizes for competitions that don’t require a decent amount of skill. Many casino games fall into this bracket – as they are at least partially games of chance. Even games like Poker are not allowed. However, this does not apply for sports betting (there are betting shops available in Derry).

The law itself is very outdated. Not only was it enacted in 1985, it’s also based on regulations from the 1960s. For the rest of the UK, the Gambling Act 2005 applies. This is much more modern and means land-based casinos are available across England, Scotland, and Wales.

But as the power to regulate gambling has been devolved, Derry residents and visitors have been stuck with the old rules.

What alternatives are there?

There are no brick-and-mortar casinos in Northern Ireland at all. So the only real option for a land-based experience is to head across the border or Irish Sea.

Nearby Letterkenny in Ireland is about half an hour away from Derry by car and has a few decent – if not grand – casino options.

If a trip to Great Britain is on the cards, then most major cities have big brick-and-mortar casinos. The closest to Derry is probably Glasgow and Edinburgh to the north, or Liverpool and Manchester further south.

There are no online casinos available in Derry at the time of writing. That’s because the old 1985 regulation applies to gambling on the internet. So online slots and casino games are not allowed to be offered in the country for a prize.

Again, this is in sharp contrast to the rest of the UK. As part of the Gambling Act 2005, online gambling is allowed in England, Scotland, and Wales. There’s a dedicated authority – the Gambling Commission – which grants licences for gambling websites to operate legally in Great Britain. Many websites have acquired a licence which affords Great British players a lot of choice. For example, they can browse lists as deep as the top 50 online casinos to find a place to play.

Whereas residents of Derry – and the rest of Northern Ireland – aren’t even able to gamble at one site.

What alternatives are there?

Unlike at land-based casinos, it’s not possible for you to head across the Irish border to play online.

Even an online casino in England, Scotland, or Wales isn’t an option. That’s because you need to complete the online casino verification procedure to be able to open an account in Great Britain. Part of this procedure involves verifying your address – with NI not being eligible.

While no casinos officially exist in-person or online in Derry and Northern Ireland, there is reason for optimism.

It’s pretty widely accepted that the 1985 Act is not fit for purpose in the modern world. Until now, the NI government has never gotten round to amending it much – aside from a few tweaks here and there. However, the government’s stance has finally begun to change.

In April 2022, the first overhaul of NI’s online gambling regulation came into effect. This made betting shops more accessible, amongst other changes. However, a second – much wider – overhaul is expected to happen in the coming years. This is likely to change what is essentially a ban on all non-skill games of chance. It’s also likely to contain rules about gambling online.

One thing that’s unclear is whether the Gambling Commission’s powers would be extended to include Northern Ireland. Or if an entirely new authority would be created. Due to the way that the country is governed with powers often being devolved, it’s more likely that we’ll see a new authority take over.

But whoever takes over, these prospective changes would bring about a huge change for Derry. At least one brick-and-mortar casino would likely be built in the city. Residents would probably also be able to play casino online.

So after decades of being stuck in the dark, there may be some light at the end of the tunnel.