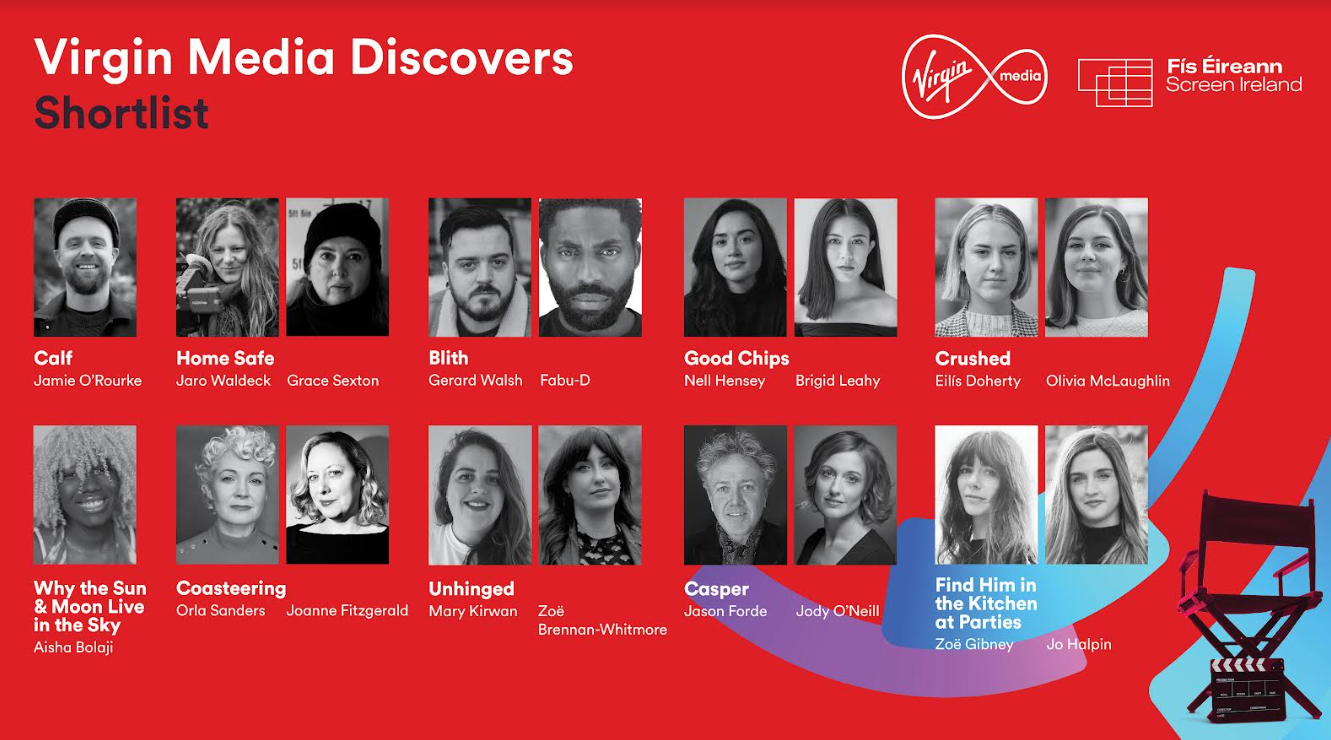 Ten new submissions have been shortlisted to take part in the 2022 Virgin Media Discovers Short Film Competition, benefiting from total prize fund of €200,000.

Selected from hundreds of entries this year, each shortlisted project will receive an investment of €6,000 to develop their script with a mentor and the three finalists will be chosen and awarded €30,000 to bring their script to life on screen with the production of a 10-minute short film. The final production will be broadcast on Virgin Media Television and Virgin Media on Demand.

Now in its third year, the competition continues to showcase outstanding original creativity and a diverse collection of voices and engaging stories with star judges for this year’s competition including Lenny Abrahamson, Director of the new ‘Conversations with Friends’ series and rising Irish actress, writer and star of hit crime drama, Kin, Clare Dunne.

One of last year’s winning films, ‘Punch Line’, which tells the story of how a transgender female stand-up comedian reframes a transphobic attack she experiences during the day in her routine that evening, has gone on to win a number of international awards, including ‘Best Direction’ at the LGBTQ+ Los Angeles Film Festival.

Bill Malone, Director of Content at Virgin Media Television said: “We’re delighted to be able to offer this level of funding, mentorship and a platform to some of Ireland’s most promising film makers that have such unique voices and new stories to tell.

“As a national broadcasting platform, it is important to Virgin Media that we invest in emerging talent, the Virgin Media Discovers Short Film Competition is a great opportunity for us to do this.

“For our applicants this is not just about building their careers, it is also a chance to raise awareness of the issues at the heart of their films, and I am thrilled that we can help them to have their voices heard.”

Andrew Byrne, Head of Television, Screen Ireland said: “As the national development agency for the creative screen sector, investing in and encouraging the development of new talent is a key principle of our work in Screen Ireland.

“We are thrilled once again to be able to further support this short film initiative, growing a broad range of exciting new talent and giving mentorship and first screen opportunities to a range of creative voices and diverse themes which deserve further recognition.

“We look forward to seeing the final developed projects and shining a light on the stars of the future both in front of and behind the screen.”

With a prize fund of €200,000, 10 filmmakers will be awarded €6,000 to realise the full potential of their scripts through professional development. 3 of these projects will then be awarded €30,000 to produce their 10-minute short film which will be broadcast on Virgin Media Television in 2023. €50,000 will go towards supporting the projects through script editing, mentorship, PR, advertising and marketing support.

The 10 shortlisted projects are:

Always Find Him in the Kitchen At Parties (Drama) Writer/Director: Zoë Gibney

Fake it ’til you make it, that’s what Sean keeps telling himself. But how far will he go to cover his shame?

David has recently moved to Ireland to create a better life for his daughter as a paediatrician. He soon finds out it’s not that simple.

A near fatal farm accident leaves teenager Cáit with a terrible decision to make in order to do what she must to protect her family.

A dark film about the final week of 8-year-old autistic boy Casper’s life. Utilising straight to camera address, visuals and sound inspired by the autistic experience to mesh avant-garde documentary style with narrative.

Following a series of unsuccessful rounds of IVF, Sinead runs and Peter gardens; creating life can destroy you.

A dramedy about what happens when your feelings are strong, but your vodka is stronger. Emma battles with ‘the fear’ when she overshares about her crush on a night out.

Dublin 1989. A family of Vietnamese immigrants struggle to keep their takeaway business afloat while their 12 year old daughter befriends one of the  customers, a local Irish boy. When he disappears, she sets out to find him.

In a normal world, walking home may seem like a straight-forward thing to do. But in the world of a sketchy man, hooded and hard to read, this task proves to be quite the undertaking. What dangers can he encounter on his way home?

After discovering the love of her life and colleague on Tinder, a self-deprecating fat millennial must find the confidence to swipe right before his leaving party, all while navigating a fatphobic workplace

Why the Sun & Moon Live in the Sky (Fantasy) Writer/Director: Aisha Bolaji and Alfonso Films

Living in the mundane suburbia of Farraig-Mor, two teens plan to escape by building a spacecraft and living in the sky.