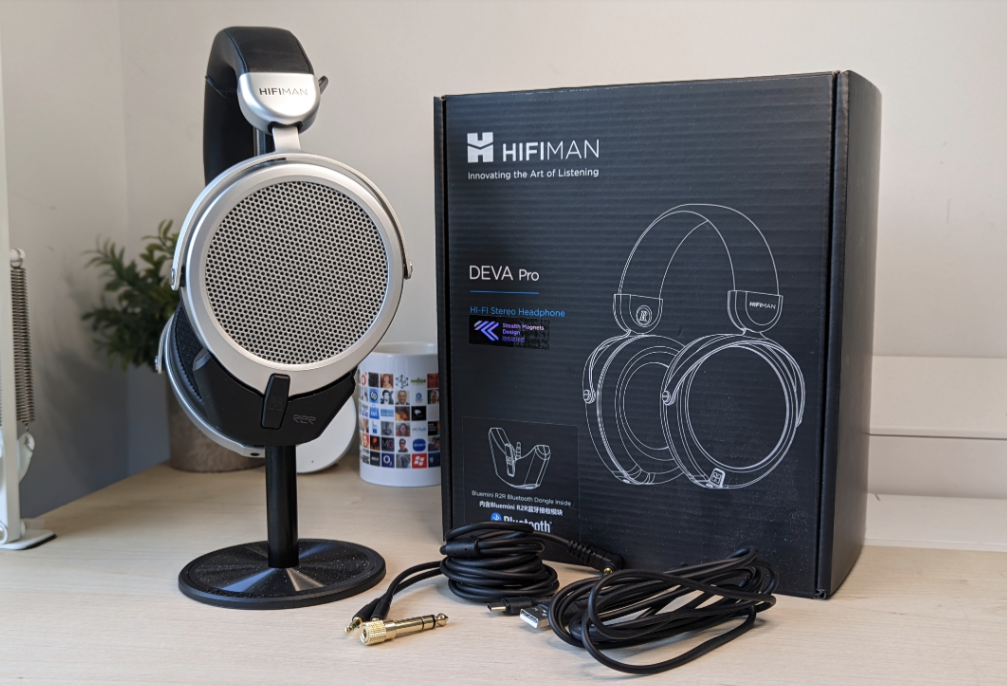 If you are looking for the ultimate audio experience in more ways than one the new Deva Pro headphones from HiFiMan are ones to consider, with more than one connection option you have more to gain over your standard bluetooth or wired headphones and can cover more ground with the audio experience in return. We covered most of what you will find with these in the unboxing which you can see here.

What are these headphones all about then

They have an Acoustically Invisible Stealth Magnet: Unlike the sound waves created by a conventional magnet, the special shape of Stealth Magnets enables the waves to pass through the magnets without generating interference. HIFIMAN’s advanced magnet design is acoustically transparent, dramatically reducing wave diffraction turbulence that degrades the integrity of the sound waves. The reduced distortion yields pure sonic output that is accurate and full-range.

These are by no means small headphones they cover the ears which I actually like and are light enough they are super comfortable on the ears with no clamping effect even using them for hours and the headband is also comfortable too, now with these there no controls to mess about with per say apart from the attachment you get with it (Bluemini R2R) which we will speak about later.These are really only meant for indoor use however you could wear them outside weather permitting as I did out my back garden for example.

With headphones like these they are aimed at a different niche I think, we have tested many headphones before with no bluetooth before and there is still that fidelity argument to be had having just a wired connection now with most phones not having a headphone jack these days you can run into issues if you do not have anything to oversee that which is not hard to find these days, so with that you can connect with the R2R ad on connector you get in the box which works a treat and then you have the options to go wired not once but twice. You have both a dual-sided unbalanced 3.5mm cable and a single-sided 3.5mm balanced cable and also whilst the connector is plugged in you can go USB-C which is what most mobile phones are today but lets no forget you can use these on more than just mobile phones but for the average joe most will likely do that but you can plug into anything like consoles and home systems etc and really get the full end use out of them and it is a joy.

This is where you can settle the naysayers saying tech reviewers ears differ and one saying that one review says a pair of headphones are good and one says they are bad, these headphones cover all ears here even audiophiles ears with the different connection options you can avail of but then you have the wired vs wireless argument thrown up too which again can be dismissed with the different sound stages with balance depth highs lows and mids and much more they are a pair of headphones you would want to try out in all scenarios and hear the difference with all connections and just enjoy them because they are dam good in all aspects from my testing.