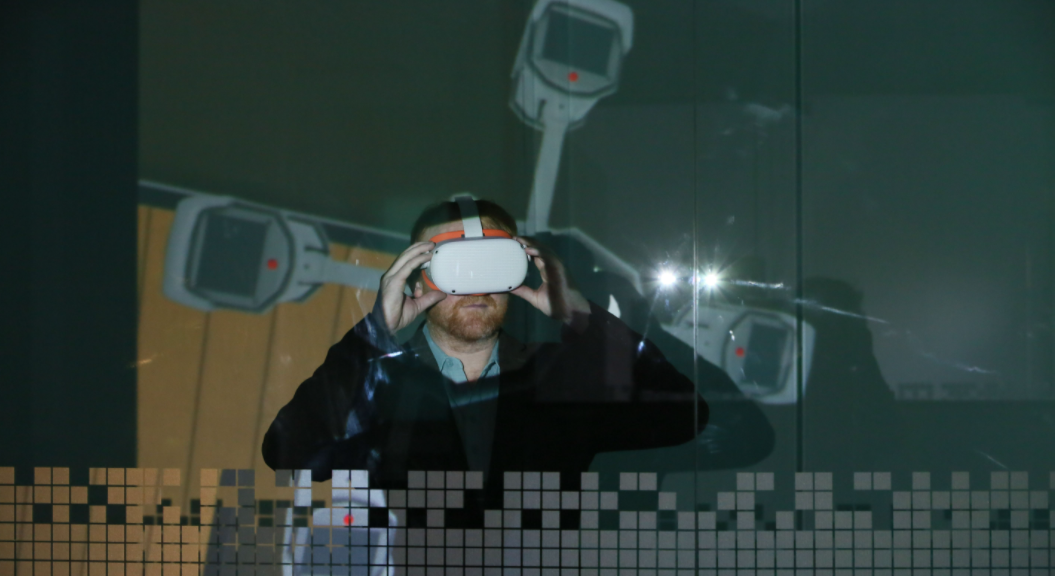 Award-winning theatrical innovators The Performance Corporation will present their cutting edge experience Emperor 101 at the world famous tech/arts festival, first presented at Dublin Theatre Festival 2021. The production allows live performers to interact with audiences in Live Virtual Reality (VR) and explore the explosion of online conspiracy theories, and the parallel rise of far-right extremism. For this presentation, the performers will be in 2 separate countries, the server that supports the tech in another, and the audience in headsets in Austin.

This ground-breaking production, is at the cutting edge of an emerging crossover between theatre and Virtual Reality. The Performance Corporation is one of the first theatre companies in the world to design and build a bespoke virtual world in which to stage a Live VR experience. In this VR space, live actors and audience inhabit avatars that allow them to interact and speak to each other in real time.

Speaking about the production, Artistic Director of The Performance Corporation Jo Mangan said: “It’s incredibly exciting to be part of what we believe is a new departure for theatre. I believe that by creating this kind of live and interactive performance in a specially designed virtual space, we can open up a huge array of new possibilities. We’re lucky to have an amazing team working on Emperor 101 to create this completely new experience for theatre audience and thrilled to be taking it to the prestigious SXSW with the support of Culture Ireland.”

The Performance Corporation believes plays like Emperor 101 have huge potential, and plan to further develop this digital genre in the future. The company envisages future live VR productions that would be available to audience members in locations across the world simultaneously, opening up new theatrical frontiers.

In the play, we meet a notorious conspiracy theorist who has built a Virtual Reality space to induct recruits to her organisation. She wants her country to go back to the past, but her own traumatic history is threatening to destroy the movement she has built.

Emperor 101 immerses the audience in an alternate world that reflects the mind and motivations of a conspiracy theorist. In a time when the very notion of truth or facts is called into question, the innovative use of VR reflects the multiple realities or ‘bubbles’ we live in. The piece riffs on influences from ancient mythology to Alice in Wonderland, and asks if rejection of the ‘mainstream’ is a product of fear, or the ultimate act of self-empowerment in a complex world.

Emperor 101 begins with an intimate in person interaction with a live performer. The audience then puts on a Virtual Reality headset and is led through a series of interactive environments. Here they experience live interaction with performer avatars. The story explores the inner life of a high profile conspiracy theorist as she struggles with a personal tragedy that has turned the world upside down.

Produced by The Performance Corporation