Seven in 10 Irish people rely on their smartphone for work 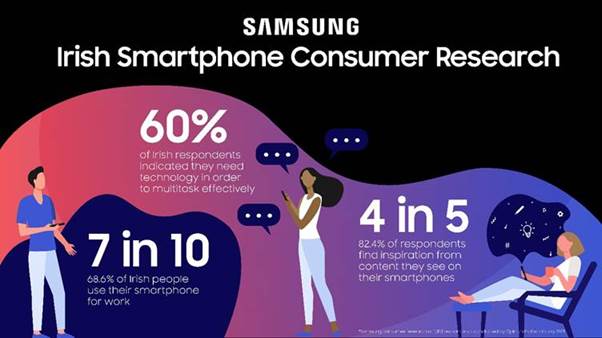 Nearly three quarters of Irish adults (68.6%) rely on their smartphones while working, at least some of the time, according to new research revealed by Samsung Ireland. This research highlights a change in work habits, especially when it comes to how people leverage technology. Almost sixty per cent of Irish people (59.5%) need technology to multitask, while the survey also revealed that the majority of Irish respondents never leave their house without their smartphone (62%).

With this research, Samsung wanted to explore the role technology plays in enabling the transition to better ways of working, including the ability to work from anywhere, multitasking and better productivity. The national survey of over 1,000 people, conducted by Opinion Matters found that the use of technology made users more productive and even became a source of inspiration to many respondents.

This also rings true in younger demographics, with three quarters of Millennials (76%) saying they rely on their smartphones to do their job, 26.3% consistently check in on their devices while working, and almost half (49.3%) claim they would feel lost without their smartphone device.

More than half of Irish people (60%) say they need technology to multitask. Interestingly, 35-44 year olds are 10% more likely to multi-task than their next generation, 45-54 year olds. The research revealed due to reliance on smartphones, multitasking has become easier for respondents with most Irish people revealing they regularly watch or play something on their devices even while they watch TV (63%). Over a quarter of 16–25-year-olds admit to using their phone while at the cinema (30.6%) or a friend’s birthday party (42.1%), while they are least likely to sneak a text at a christening (12.9%).

Paul Toland, Ireland Sales Lead for Samsung’s IM Division commented, “It’s incredibly interesting to see the increased adoption of technology in work environments. Our research proves that there’s a demand for more innovative devices, and we are proud to have made huge strides in this area recently through the launch of our latest range of Foldables. The Samsung Galaxy Z Fold3 blends smartphone and tablet functionality, where users can easily run three apps on screen at the one time. Through products like this, we can see the technological advancement for productivity is becoming a priority in new device design.”

“Our customer feedback helps us deliver the best devices possible, particularly inspiring us to incorporate innovative smash-proof solutions such as Gorilla Glass Victus and Armor Aluminum frame, in our latest Flagship range. While mobiles are more prevalent, in Ireland Samsung saw a 15% increase in tablet sales in the first three quarters of 2021, highlighting consumers love for multi-device usage.”

A Source of Inspiration

Smartphones are now one of our greatest companions for both work and life, with over 82.4% of respondents claiming that the content they see on their device brings them inspiration. The research revealed that the majority of Irish people never leave their house without their smartphone (62%), while 30.3% of 16-24 year olds claim that their smartphone means more to them than most of their possessions.

When it comes to purchasing smartphones, there’s a keen interest in innovation with people wanting more from their devices. Over 70% of respondents want a device that stays charged for longer (72.8%), while other key requirements include wanting a smash-proof (61.3%) and water-proof device (59.8%) that has access to the internet from anywhere (54.5%). It is clear that respondents don’t want to spend a minute without their smartphones regardless of location, accidental drops or even if they’re out in the rain.

Quentin Doran O’Reilly, Head of Product Management said, “At Samsung we have seen first-hand a transformative change in the world of work thanks to technology, which is why we developed, and are constantly refining, the Samsung Ecosystem. Our goal is to empower people with technology, be it smartphones, tablets or wearables that integrate seamlessly. The Samsung Galaxy Ecosystem, thanks to app continuity, pursues a connected lifestyle that makes it easier and more comfortable to use Galaxy devices simultaneously or switch between them easily. From experience, it is invaluable to be able to seamlessly connect your collection of devices to your phone without spending five minutes in the settings. When working from home, I can easily join calls whilst walking using my Galaxy Watch and Galaxy Buds”.

House of Marley Releases New Get Together 2 Family of Speakers