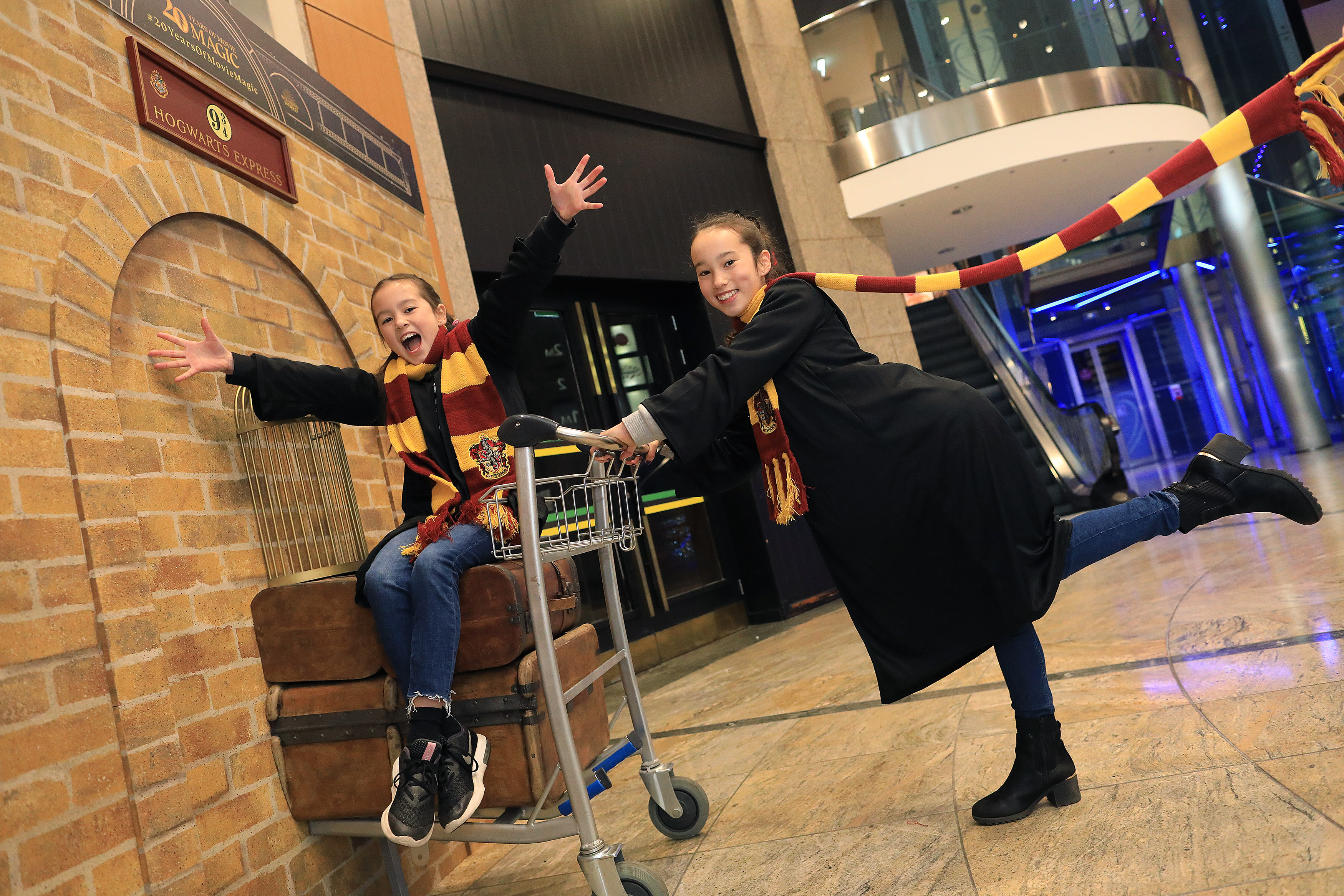 Harry Potter fans, dressed in their best robes and Hogwarts scarves, gathered to celebrate the 20th anniversary of Harry Potter and the Philosopher’s Stone releasing in UK & Irish cinemas, by witnessing the launch of the iconic Platform 9 ¾ Trolley in Dundrum Town Centre, Dublin.

The installation allows fans to recreate the moment when Harry first made it on to Platform 9 ¾, by running through a magical brick wall in London’s King’s Cross station, before taking the 11 o’clock  train to Hogwarts, which it did every year on September 1st .

The trolley, a symbol of the gateway between the ‘Muggle’ and wizarding world, is situated on the concourse of King’s Cross Station, alongside the Harry Potter Shop at Platform 9 ¾, and is visited every year by over 2 million people, serving as a symbol of the Harry Potter legacy for the last two decades, and over the last two weeks cities across the UK have been able to experience the magic too.

The first 100 lucky fans in Dublin were surprised with LEGO® Harry Potter goodies to celebrate the launch. The trolley installation will be available at Dundrum Town Centre for Harry Potter fans to visit until 7th November.

Paul Sheeran, 8 years old, said “I’ve been preparing all day for this as I’m a huge Harry Potter fan. I was a little bit nervous but very excited to be here. My favourite thing about Harry Potter is all the friendships and that everyone is different, no one is seen as not good enough”

Criona Brassill, 46 years old, said “it’s been wonderful for the kids to get a photo here today and feel that bit closer to the magic of the films”

Over the course of the tour the trolley has visited Edinburgh, Birmingham, Cardiff, Belfast and now Dublin.

As part of the anniversary celebrations Harry Potter and the Philosopher’s Stone has returned to UK and Irish cinemas for a limited time, with Movies @ Dundrum cinema additionally hosting special screenings of all the Harry Potter films this weekend (November 6th and 7th) to coincide with the arrival of the Platform 9 ¾ Trolley.

The trolley tour was launched to thank the fan community for their love and support over the past two decades and help them capture their own version of this iconic moment from the first film . The official 20th Anniversary of Harry Potter and the Philosopher’s Stone will be celebrated on the 16th November 2021. The Harry Potter Magical Movie Mode is a wondrous new way to experience Harry Potter and the Philosopher’s Stone. Available now on Blu-ray, DVD & Digital.

Why Do We Need Random Numbers and What is an RNG?

What to Look for in a Slot Machine