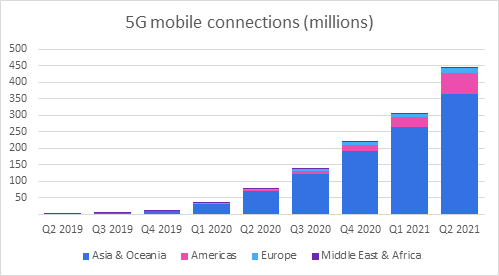 Omdia analysts have found that 10% in-network penetration is a key milestone for 5G as this is the point at which 5G appears to begin to have a positive impact on mobile revenues.

Data from leading 5G market South Korea shows a clear revenue uplift post-5G launch once market penetration passed 10% a year ago. In China, 5G subscriptions nearly doubled in the first half of 2021 to reach 318 million in June, which is equivalent to 11% of total mobile connections. Meanwhile, mobile services revenues grew 4.7% and 3.7% year on year in Q1 and Q2 – a level that hasn’t been seen since early 2018.

“We can only speculate about the impact of 5G on service providers until the technology reaches a certain critical mass beyond early adopters. Only South Korea has reached this point and the story there is a positive one,” said Ronan De Renesse, senior research director, Omdia. “Another 24 markets are due to reach 10% 5G population penetration by the end of 2021, 37 in 2022 and over 100 in 2026.”

Chinese, Korean, Japanese and US operators commanded over 93% of the global 5G market in Q2 2021. Among the more than 400 million subscriptions globally, 82% are in Asia, of which 87% are in China. Markets outside Asia with more than 5% population penetration include the US, Finland and Ireland.

According to Omdia’s market predictions, markets on average are expected to see a 5% data ARPU (average revenue per user) uplift from two years onwards post 5G launch. However, there is no direct correlation as markets are affected by other factors such as macroeconomic dynamics, COVID recovery, local market competition and regulation.

Adversely, Omdia expects mature markets to see less growth in percentage terms than others because growth coming from digital services inclusion in developing and emerging markets will dwarf the effects of 5G. For example, while 5G may command a 10% increase in ARPU, a first-time smartphone user in Africa may double their mobile bill.

“5G is still in its infancy and we have yet to see its full potential from a technology and commercial perspective,” continued De Renesse. “Similar to 4G when it launched, 5G adoption is mostly supply-led which means that demand for 5G needs to be created by the industry. Operators in China and South Korea have shown that if you put 5G in the hands of consumers then revenues are likely to follow.”