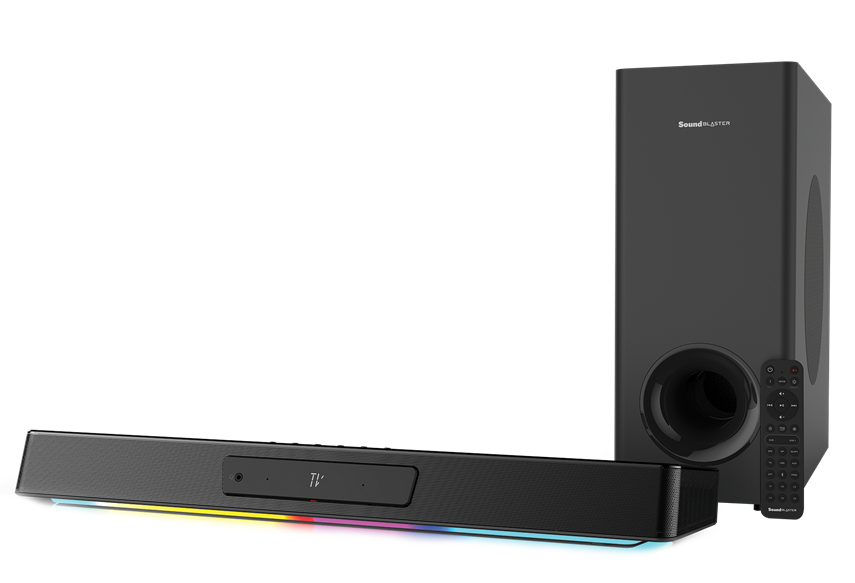 Creative Technology today announced the release of Sound Blaster Katana V2, the successor to the original Sound BlasterX Katana which had been regarded by many as the definitive gaming soundbar. Completely redesigned with an all-new sleek form factor, it delivers 68% more power than before, features improved audio dynamics and transforms the headphone experience with Super X-Fi Headphone Holography – this new Katana is a menacing weapon for desktop and console gamers alike.

The Sound Blaster Katana V2 personifies the culmination of Creative’s best audio technologies as it brings games and movies to life through its 5.1 channel playback. Delivering the sound signature of a high-end Sound Blaster, built with more than 30 years of audio processing expertise, it retains the acclaimed tri-amplified design of its predecessor, where each of its 5 drivers is powered individually by Creative’s proprietary multi-core DSP controller. The audio quality is enhanced further through improved fabric dome tweeters for cleaner and more refined highs, and a larger, more imposing subwoofer for deeper yet impactful bass performance.

For users who prefer to shut out the world or battle away late into the night without disturbing others, Super X-Fi Headphone Holography, a multiple award-winning technology which recreates the soundstage of a high-end multi-speaker system in headphones, is the compelling solution. Built into the Sound Blaster Katana V2 with the integrated Super X-Fi UltraDSP chip, users will experience holographic audio that is personalized according to how they hear sound, and enjoy an unprecedented level of realism as they fully immerse themselves in a movie, or dive right into the gaming battlefield.

Enemy-spotting gets easier than ever before – with SXFI BATTLE Mode, a sound mode which is specially designed to give FPS gamers an unprecedented edge in enhanced audio cues, both for directionality and distance. There is also Scout Mode, a familiar Sound Blaster feature which focuses on sound detection so that opponents are heard before they are seen moving on screen.

With an integrated Dolby Audio decoder, users get to enjoy the cinematic experience not just while gaming, but also while movie-binging on streaming platforms like Netflix, Disney+, Amazon Prime.

The Sound Blaster Katana V2 can be customized to sound and look just the way users like it. When connected to the Creative app (both desktop and mobile), users can choose from various EQ settings and tune the audio with the Acoustic Engine suite. Furthermore, the redesigned RGB lighting strip features various illumination mode selections across 16.8 million colors, which intuitively reactive to the playback content.  These settings can be saved as customized profiles on either the app or the programmable buttons on the remote control.

It is comprehensively decked out with a multitude of connectivity options, with HDMI ARC and optical ports, wireless Bluetooth 5.0, USB-C port for USB audio support, 3.5mm AUX-in and SXFI-out for certified Super X-Fi products. It is compatible with desktops and consoles alike, including PC, Mac, PS5, PS4, Xbox Series X and S, Xbox One and Nintendo Switch.

All in all, the Sound Blaster Katana V2 provides a complete entertainment experience which transcends beyond what is expected of a gaming soundbar.