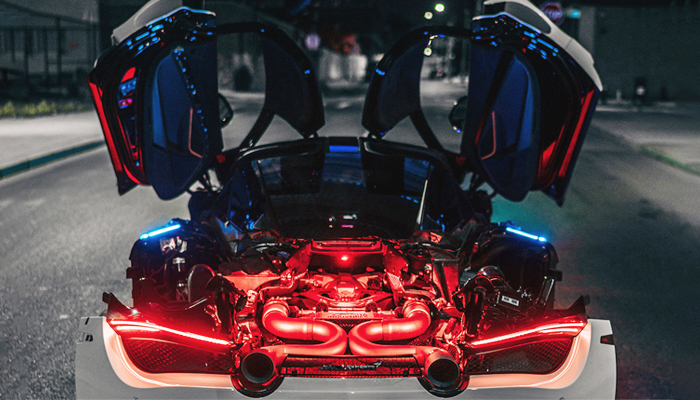 Along with aerospace, robotics and education, the automotive industry remains one of the key sectors adopting and embracing 3D printing.  Not only does the industry use the technology for components and tooling equipment, but also for the customisation of parts, for example, wall panels, bumpers and car doors.

3D printing functional parts has become more prevalent in the automotive sphere, especially with the adoption of additive manufacturing technology, Selective Laser Sintering. However, the ultra-lightweight McLaren 720S has made the headlines because of its completely exposed exterior made from carbon fibre, combined with the use of 3D printed parts to improve vehicle performance.

We look at the people behind the innovation, the differences it makes to high-end vehicle functionality and why the McLaren 720S could mark the start of a new age in the manufacture of high-performance cars.

Specialists in aftermarket carbon fibre and ECU tuning, 1016 Industries works on exclusive and exotic cars across the world and has already used 3D printing technology for prototypes and the production of spare parts. They worked alongside Abushi to produce the main parts for this ultra-lightweight 720S sports car.

The fully functional parts of the special edition model are up to around 9% lighter than the original factory model, with the combined use of 3D printing and carbon fibre dropping its weight from 1,419 kg. Founder of 1016 Industries, Peter Northrop says that the main aim was to see how 3D printing and carbon fibre processes could work together in auto design. The new model is the result of ‘years of extensive field testing and design validation. He states that it’s no secret that 3D printing makes way for more ‘nimble manufacturing’ but the process has also allowed engineers to apply improvements to the ‘quality and precision of each functional part’.

Typically, automotive parts manufacture is an extensive process incorporating the use of conjoined pieces for the making of the panels. However, using an extremely high-resolution resin 3D printer used for creating large scale models, the 720S components were made in just 120 hours and with one single piece, which helps to strengthen the structure of the part.

The research and design process adopted by 1016 also provided ways to adapt the printing to scaled manufacturing development. 1016 used Computational Fluid Dynamics to help improve ergonomics, an especially important feature for performance sports cars. The 3D printed parts on the vehicle include the inner bumper structures, outer door wings and the hood and as linkages within the wing kit.

The full process, which resulted in thousands of hours of engineering, means that prototypes as well as final designs were able to be produced. The company now plans for tooling to be made via 3D printing for the moulds of the 720S and possibly other performance cars it works on in the future.

3D printing in the auto industry

As the call increases for greater performance in standard vehicles, as well as performance cars, 3D printing makes way for the production of more ‘performance enhanced’ features, and an improvement in the overall production process with the use of 3D printed tooling equipment. For example, Volkswagon’s Autoeuropa factory which began using 3D printing for tool production a few years ago, now uses it predominantly for inhouse tooling production of jigs and grips to help cut costs from 70% to 95%, as well as reducing lead times.

When it comes to sports vehicles like the McLaren 720S, other manufacturers, such as Porsche, has also incorporated the technology into their prototype production. More recently, the company created 3D printed aluminium pistons for the engineering of its iconic 911 GT2 RS model, in partnership with mechanical engineering company, Trumpf, MAHLE. The inclusion of the 3D printed pistons supports greater efficiency to boost the Horse Power of the vehicle. Frank Ickinger, Porsche project team leader said that the technology makes it possible to reach 30 PS more power from the 700 PS biturbo engine, and the same time, efficiency is improved.

A new era in 3D printing for performance vehicles?

Along with the prospect of producing vehicle body components in large scale manufacturing processes and plans to do more with 3D printed components for the other high-performance vehicles it works on, the story for 3D printing for performance has not come to a conclusion yet. Coupled with mainstream vehicle manufacturing’s commitment to 3D printing adoption and continued research, it looks like we can certainly expect further developments all round in the automotive sector.