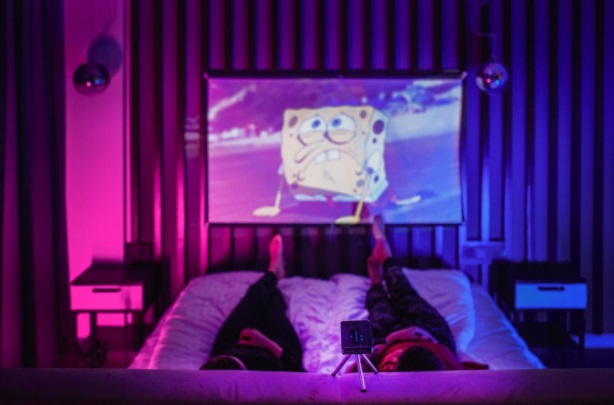 Tired of watching your favourite shows and YouTube videos on your phone? With this new pocket projector, you’ll never need to squint again. The Prima Projector looks and acts just like a smartphone, but it can project all of your content—videos, apps, games, and more—up to 200 inches in full HD.

Prima is anything but your typical pocket projector. It merges the best features of smartphones, smart TVs, and gaming devices into a complete entertainment system that fits in your pocket.

Some of the highlights include:

Prima transforms any surface into smart cinema, and it goes anywhere. It’s a solution for big-screen viewing at home, those who travel frequently, or anyone who is tired of staring at a small screen.

And now, Prima is on sale for nearly 60% off during the New Year’s sale. Along with the FREE accessories you get with purchase (tripod, remote, charger, and HDMI cable), plus FREE shipping, you’ll save over €500 if you order before the sale ends.

Below, we’ll go into a bit more detail on Prima’s features to let you know what you can expect from this pocket cinema.

Prima’s projection tech was developed by Texas Instruments. TI’s DLP projection is regarded by many to be the best for portable projectors for its picture quality, lightweight components, and reliability.

Not only that, but DLP tech also supports 3D video. Can you imagine projecting a 3D movie at 200 inches? It’s like you’re living inside the film.

Another advantage of TI’s DLP tech is the extra brightness. Prima is about 4x brighter than other pocket projectors, and this has a huge impact on the overall picture quality. Brighter projection doesn’t just mean a brighter picture. It means more defined colours across the spectrum for an image that never has that grainy projector look.

Prima has an RK3128 CPU 4 core processor and runs Android 7.1 OS. It doesn’t just look like a smartphone, it practically is one. You can do nearly everything on Prima that you can do on your phone—download apps, text and call, stream videos, play games—but on Prima, you can do it on the big screen.

Thanks to Prima’s processing power, you’ll have access to all the apps in the Google Play store. When you turn it on, the dashboard looks a lot like that of a smart TV. Simply select your apps or downloaded content directly from the projector and enjoy. Netflix, YouTube, Office, Steam—all of your favourite apps are supported.

Prima Projector is marketed as the most portable pocket projector ever made. And this is largely true. Prima is the same size and weight as an iPhone 8, making it the first “pocket” projector that actually fits in your pocket.

Here are the measurements:

But size isn’t the only factor in portability. Prima also comes with features and accessories that make it a lot less stressful to carry around. The most important is the sliding door that protects the projection lens. Most portable projectors damage easily—especially the lens—making them a lot less portable than they seem. But you can take Prima on the go with a lot more confidence.

Prima also comes with a protecting sleeve for safer portability, but it won’t do much besides protecting the touchscreen from scratches and scuffs. For increased durability, we recommend adding a carrying case to your order.

Most projector users these days will likely be using their devices indoors. Plugged into a power source, Prima will function indefinitely. If you choose to bring Prima on the go, you’ll enjoy 3 hours of video playback per charge. This isn’t the best battery life out there, but it’s about 50% longer than the average projector lasts.

However, if you’re using Prima for audio only, you’ll get about 30 hours of life, which is significantly more life than you’ll get from the average Bluetooth speaker. This makes Prima a great accessory for parties and gatherings even if you’re not going to project something.

Prima succeeds at mirroring and casting seamlessly from just about any device. It has built-in Apple and Android screen-sharing software to prevent any distortion or weird colour alterations, so you can mirror and share with a simple click.

You can also cast anything to Prima. No matter what apps or content you have on your phone or tablet, you can instantly cast to Prima and enjoy all of the features on the big screen without losing the functionality of your device.

These features boost the social value of Prima and increase its portable appeal. Groups of friends can easily enjoy games, photos, or videos on Prima just by using their phones.

One of the worst things about most portable projectors is the dismal speakers. They’re often imperceptible to the ear and the sound quality is terrible. Despite its size, Prima packs a powerful speaker inside. This is one of the reasons that its manufacturers encourage people to use it as a Bluetooth speaker too.

The Hi-Fi speakers are plenty loud. They can easily project to a living room or meeting room full of people. Of course, they’re not as good as big external speakers, but for on-the-go use, they are more than acceptable.

Prima is compatible with every type of device and operating system. Even though it has an Android OS, you’ll be able to use it with all types of devices. It even has software built in to optimize its performance with Apple products, so you’ll be able to mirror and stream via AirPlay without issues.

You don’t need wireless connectivity to connect to Prima, either. You can connect via:

You can even connect gaming consoles like PS4 and 5, Xbox One, and Nintendo Switch for immersive gaming at up to 200 inches.

Finally, we had to mention Prima’s controls. Much like a smartphone, you can access all of Prima’s controls from a touchscreen surface. This makes it a lot easier to navigate, select, and change settings than on other projectors. Because we’re so used to using our thumbs on our phones, Prima’s controls are intuitive.

You won’t have to deal with buttons, dials or confusing menus here. Everything is touch-ready and optimized for modern smart-tech users.

To make things easier, Prima comes with a remote control, so you can kick back and operate it just like you would a TV.

To bring in the new year, Prima is offering a stellar deal on its pocket projector. For a limited time, you can grab a Prima Projector at 50% off and take an extra 10% off at checkout. That’s over €400 in savings for a 200-inch HD projector and entertainment system.

Not only that, but you’ll also get FREE global shipping and loads of free accessories boxed with your projector. The free accessories include a tripod, a remote control, an HDMI cable, and a charger.

Prima makes it incredibly easy to use this projector right out of the box, including everything you need. And now, it’s easier than ever to get one at an affordable price. Check out more of what Prima can do and get yours now before the sale ends.
VISIT: www.primaprojector.com