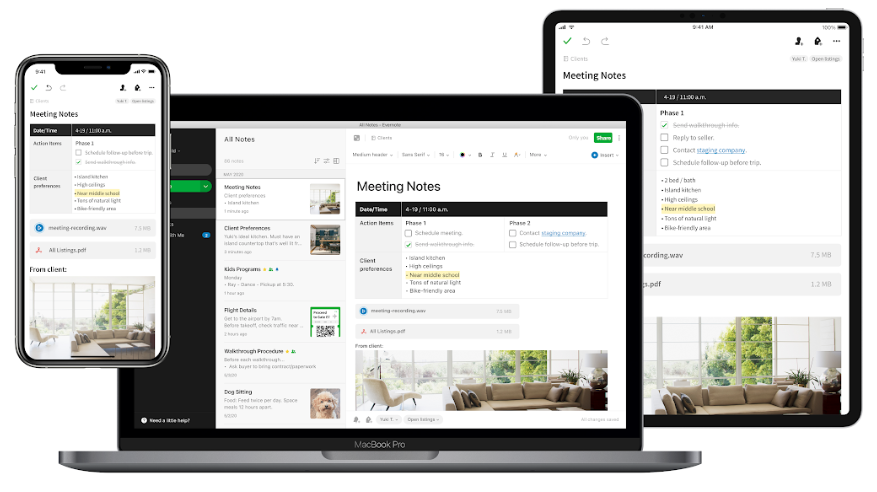 Evernote, the productivity app that lets you remember everything and accomplish anything, announces the debut of its new apps, delivering on a strategic priority to improve speed, reliability and scalability, and to lay the groundwork for fast-paced future innovation. The much-anticipated launch kicks off today with the new Evernote for iOS, marking the first in a series of releases — with rebuilt apps for Windows, Mac, and Android coming soon.

Today’s release of Evernote for iOS is the first step in delivering on the company’s one-and-a-half year journey to “focus on the basics.” Burdened with tech and product debt that had slowly accumulated since Evernote’s start 16 years ago, Evernote’s previous app architecture suffered from consistency and scaling challenges that were holding back growth. After joining the company in late 2018, Evernote CEO Ian Small worked with the team to launch a far-reaching and ambitious plan to improve the basic foundations.

“We took a bold, unconventional approach to solve the scalability and innovation limitations our product had accumulated over many successful years, which required rebuilding from the ground up,” said Small. “To deliver an Evernote that our customers love – whether they have 10 or 10,000 notes, whether they’ve been using Evernote for 10 days or 10 years – we had to go back to basics; back to the very reason we captured their hearts in the first place. And we broke with convention again to bring our customers along on the journey, being extraordinarily transparent and listening closely to what they had to say.”

As publicly shared through a series of ”Behind the Scenes” videos, the Evernote team spent countless hours improving everything from the infrastructure to design language to user experience, and optimizing almost every feature. Simultaneously and without any interruptions to customers, Evernote silently migrated billions of notes from legacy to scalable cloud storage and improved the way notes are retrieved and synced.

“Today’s iOS release marks a major milestone in our journey to rebuild our apps, our infrastructure, and the way we ship software,” said Small. “Debuting these new apps, paired with the ongoing re-architecture and data migration we’ve been doing in the cloud, is the first proof point as we set up Evernote to delight our customers and achieve new company growth for years to come.”

The complete, comprehensive rebuild sets the stage for fresh design improvements across all platforms, including:

The new Evernote for iOS is available to download on the App Store, with new releases for Windows, Mac, and Android coming soon.