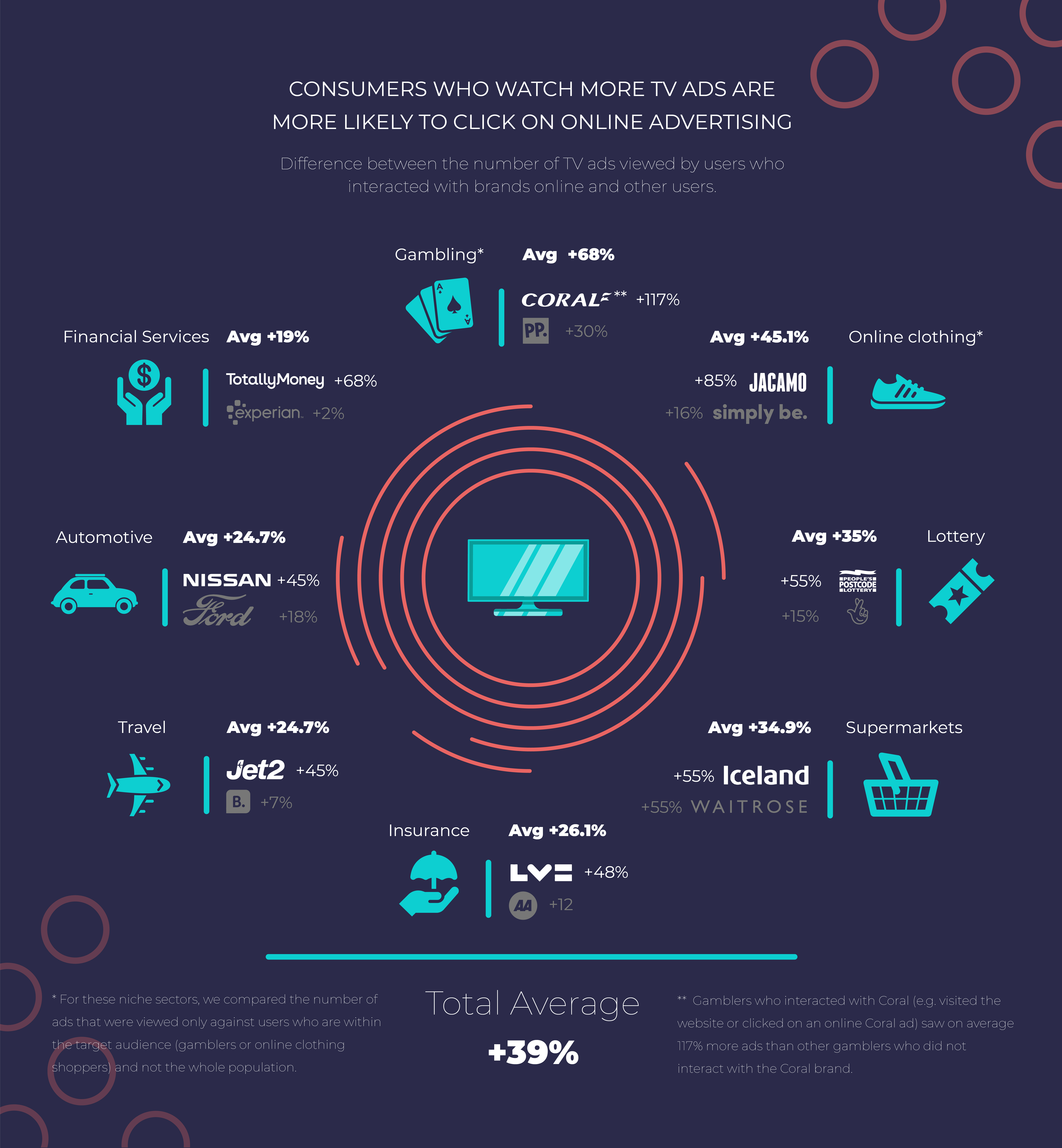 A consumer analytics company – passively measured consumer behaviour 24/7 including all their TV viewing (content and ads), online behaviour as well as offline store visits. The analysis on the impact of TV advertising on online platforms was conducted in sectors such as supermarkets, automotive, travel, insurance, financial services, lottery, gambling and online clothing, which represent a cross section of products associated with both impulse and considered purchases.

The best performing sectors were gambling and online clothes, where those who interacted online with brands – were exposed to 68% and 47% respectively – more TV adverts than those who hadn’t. Within these sectors, for brands such as Coral those who clicked on their adverts or visited their website were exposed to a massive 117% more Coral TV adverts than other gamblers. For Jacamo, in the online clothing sector, this figure was 85%.

The Facebook and Google duopoly now account for 60% of all digital advertising expenditure globally or USD $144.6 billion, but their success is clearly being propped by TV advertising who continues to be the most effective medium at brand building and driving online clicks

ViewersLogic’s single-source data shows unequivocally that TV drives online traffic but in recent years online advertising became the tool of choice for marketers because it offered better measurability than TV advertising. ViewersLogic technology can, for the first time, see the whole consumer journey both online and offline and measure accurately how our exposure to TV adverts results in consumers wanting to find out more about a product or a brand by following it through online up to the product purchase. Crucially, its technology can now also measure for the first time, how much brands really spend on generating clicks through online ads by factoring in the impact TV advertising had on generating each online interaction.

For Henry Daglish, the founder of boutique marketing agency Bountiful Cow this new data provides compelling evidence that marketing campaigns need to be more aligned across TV and online to drive sales effectively through advertising. Mr. Daglish said: ‘’Over recent years TV advertising expenditure has shrunk as brands have increasingly shifted their budgets online attracted by better measurability and segmentation but ViewersLogic’s data has now shown us that, if used correctly, TV drives the greatest improvement in online performance. This opened for us a new area of analytics and performance improvement that we are now sharing with our clients’’

Other studies have shown a clear correlation between a decrease in sales and a reduction in TV ad spend, not only TV advertising has an immediate impact on sales but it is also proved that it manages to significantly enhance the impact of digital advertising. Despite compelling evidence, recently released data by Media Audits shows that TV now account for less than a quarter of ad expenditure in the UK compared to online with over 50%, and this is predicted decline even further this year. With the cost of an advertising slot on TV becoming considerable cheaper, its proven effectiveness at brand building and driving online traffic is it time for smart brands to get back on TV?

Of the sectors measured online clothing was the second best performing and those who went on to click on a Google or Facebook advert or onto a brand’s website had seen 47% more TV adverts by that brand in the week before the interaction than those who had not (in this case we compared this just with other online clothing shoppers to neutralise other demographic influence (e.g. if online clothes shoppers see more ads than the general population). • Jacamo was particularly successful compared to their competitors and people who interacted with the brand online either through an advert or by visiting their website saw on average 85% more Jacomo ads than other online shoppers.

Out of all the sectors measured the financial services showed the lowest effect of TV on online behaviour and on average those who interacted with this sector online, saw 19% more ads in the previous week. • The data shows that Totally Money was by far the most successful financial brand in converting its TV audience into clicks and users who interacted with the brand online, saw 69% more Totally Money TV ads in the previous week. • Companies such as Experian, Money Supermarket and uSwitch had a poor cross-media performance and users who interacted with these brands saw only 2% more of their TV ads in the week before the interaction.

Online clickers on Facebook/Google ads and visitors to the lottery companies’ websites had watched 35% more TV adverts than those who did not, in the week before the interaction took place. • The Postcode Lottery adverts performed better than its competitors and people who clicked through online on Facebook/Google ads and visited the company’s website, saw 55% more Postcode Lottery TV ads.

People who interacted with car brands online saw 24% more TV ads than users who did not interact with these brands. • People who clicked on a Ford or Vauxhall ad online saw 18% more TV ads in the week before clicking than other users. Nissan’s cross-media campaign was more effective and people who interacted with the brand online saw 45% more Nissan TV ads in the previous week. • For Vauxhall, users who clicked on a Google ad saw only 3% more TV adverts in the previous week, suggesting that their TV campaign wasn’t particularly successful in driving people to search for the brand.

Because the travel industry has been severely affected over the last three months, ViewersLogic did the analysis until the end of February and saw that users who interacted with travel brands were exposed, on average, to 25% more TV ads in the week before, than those who did not interact with these brands. • Jet2 had the best performing TV campaign in this sector and those who interacted with the brand online had watched 45% more Jet2 TV ads. Their TV campaign has a specifically good effect on their FB advertising where people who clicked on a FB ad, were exposed to 77% more Jet2 TV adverts than other users. • Perhaps surprisingly, one the biggest travel brands internationally Booking.com, had a poor cross-media campaign and users who interacted with the brand saw only 7% more TV ads of this brand, compared to other users.

In this sector, those who interacted with insurance brands online had watched 26% more TV ads. • LV Insurance was especially successful in converting their TV audience into online activity and users who interacted with the brand online, saw 49% more LV TV ads in the week before. They did particularly well on Facebook where users who clicked on an LV FB ad were exposed to 115% more TV ads.