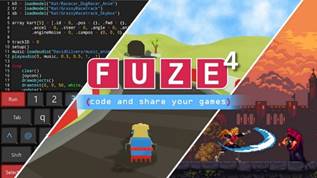 The next few months represent so many challenges for young people stuck at home.  Trying to keep up with their education is perhaps the most challenging problem of all. Those with an interest in computing could find this especially difficult due to the lack of accessible resources and, potentially, with parents less likely to be knowledgeable in the subject.

Add to this how hard it is to stay motivated when there’s more than enough digital stimulation via streaming the latest TV shows, TikToks’ and social media interaction. And, what about all those awesome games that need to be played. Let’s face it – what chance does education have against all that!

How about learning to code, in line with the computing curriculum, by creating your own games that you can play, and even share with your friends.

Be social, learn to code, and play awesome video games all in one!

FUZE4 Nintendo Switch is an award-winning coding application for Nintendo Switch. It has been designed and developed by a team of experienced gamers, programmers, artists and educators. Programming languages all have their pros and cons. FUZE4 takes as many pros as could be crammed in from a mix of languages including C, Python & classic BASIC to name a few resulting in a language easy as BASIC, powerful like C and yet very versatile like Python.

FUZE is supported by a thriving and enthusiastic community of absolute beginners, enthusiasts and seasoned programmers all willing to help, share and contribute. There’s also a series of video tutorials taking beginners step-by-step through the basics right up to advanced level games coding techniques.

FUZE have also released a free Project Workbook in PDF format to help you get started.

FUZE4 Nintendo Switch is available on the Nintendo eShop for just £12.99