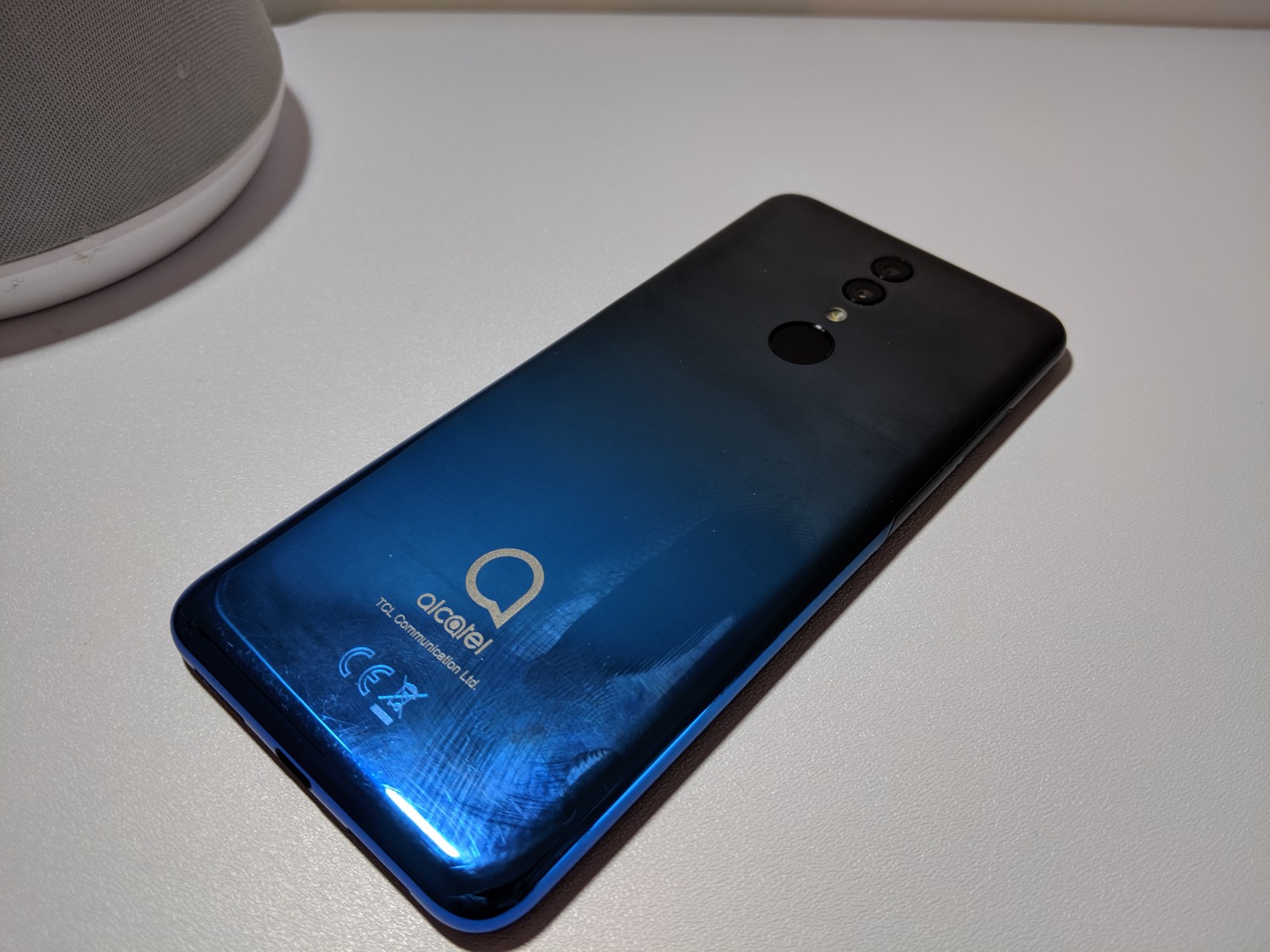 The Alcatel 3 2019 is here and another unusual naming scheme some might say but Nokia and HMD Global win that award for the Nokia x .1.2 which is confusing and very questionable but Alcatel are not the first to go with this naming scheme, (2016/2017 for example) Samsung did it for a while too but it gets confusing when you’ve several device’s starting at you in as store, with naming game over lets look at the phone.

Off the bat and when turned on it does have a premium look to it and kind of reminds me of the iPhone XR with the front panel and it does look good and vibrant and given it is not the brightest screen it does the job and depending whats on show it turns out well which is all we need. It is a decent panel for the money.

Check out the unboxing below for more and a walk-through of the UI and phone itself so you wont have too.

The build quality is cheap lets be honest but it does look good on the rear with a two tone colour and I like this but it is prone to scratching easy and you should get a case, It will be hard to find a case for this in stores but Amazon sell them and one should have come in the box even it was just a clear case to keep you protected from the get go.

We have bio-metrics on a cheap phone here and the fingerprint scanner is quite quick considering and their native face unlock (face key) is not shabby either but there is arguments on security levels here which is for you to decide but your device is secure.

Looking for a job in IT or tech click the image below.

Dual camera set up is quite good but only in the right setup. Sometimes the phone took overexposed and blown out images but overall you cant complain for the price it will take decent shots in the end under the right conditions but low light is not great and can be expected even from more expensive phones but the image and video samples below will speak for themselves taken in low light,day time and same for video and their slow motion is quite good too.

This device is not for power users but vastly improved on last years spec sheet with the 3GB RAM on board is is fine for everyday tasks like social media web browsing and emails but for heavy duty tasks it will slow down as I tried it in that capacity for two days and at times it struggled but this phone is not for that purpose but I had to try it anyway just to see but one thing for sure is as mentioned much improved over last years model.

Battery life (3500mAh) is One day for me but take into account i would be very active with social media and web browsing and so on more so than the average person so I would see 1.5 days for most and 2 days at a push this would depend on the person. For me this device is a teens phone or first or second or even upgrading form last years device and it would be a worthy upgrade if in that context.

Media consumption is fine here too as I said the screen is vibrant and near edge to edge and enjoyable and the speaker is decent enough but not the loudest in the world, again factor in just like my headphones I like things loud..

Would I recommend this phone well yes but there is much competition here from other players at the entry level tier such as Nokia and Motorola and some of their older models can be picked up for 60 euro but they a year old yet worthy devices still in some departments especially the build quality but a case on this phone would protect the casing on this as it will get marked easily and give the phone some more support but it certainly stands out with the two tone back cover which appeals to some as this is a new trend whilst the rest still often come with a one color finish that looks boring. It is a nice phone to use for people that just want a phone to do something simple and I would use it as a spare phone or use it a reviewed as a personal phone for just social media etc. I carry two phones all the time and switch off the powerhouse at weekends to stay away from it all.

Now On sale at eir