“Who Owns Who In The Internet World.” #Infographic. #web #internet 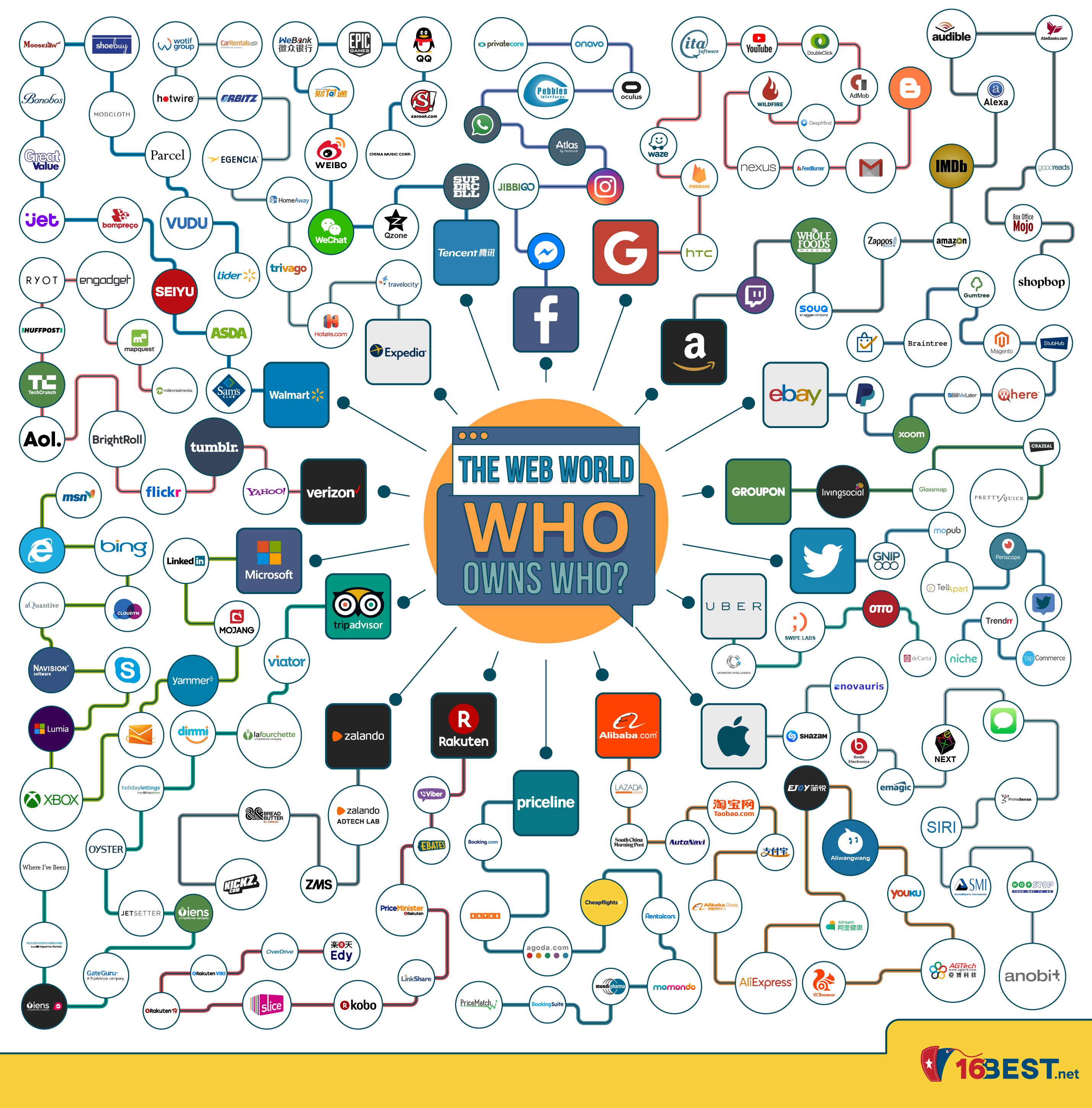 GUEST POST by Karthik Reddy, It is a common thing for one big company to own several other large companies. As a matter of fact, there are about a dozen companies that own all the other ones. Did you know that only a while ago (December 2017), Apple acquired Shazam for $400 million? Or that Facebook owns both Instagram and WhatsApp, and that Microsoft bought LinkedIn, Skype, MSN, and Bing?

Tech companies are well known for being addicted to their mergers and acquisitions. Whether it’s Amazon buying up ecommerce companies or https://www.16best.net/expedia/ famous for its discount codes and cheap hotel bookings, internet based companies are trying to dominate their respective industries and become the most successful companies they can be. 2017 was a year full of important tech mergers, so let’s take a look at some of the substantial ones.
1. Amazon
In June 2017, Amazon sealed the deal to buy Whole Foods Market for an eye-watering $13.7 billion, a huge acquisition which catapulted the ecommerce giant into physical stores and fulfilled Jeff Bezos’ long term ambition of Amazon being able to sell more grocery products.
2. Cisco
Cisco bought AppDynamics, one of its all time biggest acquisitions. This acquisition was all about helping companies make sense of big data in their companies quickly. As data becomes a hugely important part of our daily lives, it appears that Cisco hope to capitalize on the need for companies to understand and interpret it.
AppDynamics can help its customers translate business data into easy to digest analytics and insights. AppDynamics itself had a year full of growth, expanding by over 50%.
Cisco also bought Viptela for $610 million. Viptela is a developer of software defined networking technology widely used by leading telecom carriers such as Verizon. With these two acquisitions, Cisco made it clear that the company is seriously thinking about acquiring software related companies as business slowly but surely moves into the digital realm.
3. Palo Alto Networks
In February 2017, it bought LightCyber for a princely sum of $105 million. The LightCyber technologies work to bring automation and machine learning to cybersecurity and have a vision of developing technologies, which can identify sophisticated attacks that often go undetected. This was a strategic buy by the Palo Alto company and boosts its technology portfolio massively. In 2014, it acquired Cyvera and CirroSecure in 2015 to add further security capabilities for its SaaS application. Want to learn more about which tech companies own other tech companies? Check out our infographic below, you might just find yourself very surprised!