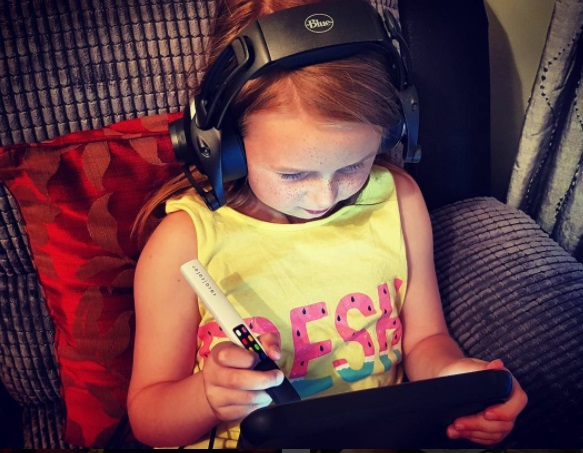 As a parent like many others out there we are all aware kids love to colour and its part of their curriculum, All well and good at school and so on but when at home there is alway the one same thing that’s left after they grab their colouring books or paper.. MARKERS AND PENS EVERYWHERE.

Also these are space takers and with kids owning more than just the one set there could be up to around 200 individual markers/crayons lying about the house or one in every press,drawer or down the back of the couch,they do be everywhere..

Given we are now in a digital era kids are now introduced to technology at an earlier age and certainly nothing I had when I was a child and its showing more and more now with schools and colleges using tablets for example and moving away from your typical paperback. This is how we are and we are slowly facing a paperless society depending on whatever the case maybe, For example we can now get all our bills online and print should we need them. Other industries are now gearing up to a paperless society and using tablets or specially designed handhelds to do the same job but without the hassle of keeping files and so on. This is the way forward and that’s it in a nutshell.

The cococolor stylus is the first of its kind aimed at kids,but adults can also use it and they can also learn and adapt to the tablet or mobile landscape and perhaps even learn something if they have not moved away from their dumbphones and so on it’s a great tool and simple to use offering 48 colors in one piece.

The pen/stylus comes in a simple pack and its easy to get going and set up.. You firstly need to remove the safety tab which I will show in video too. After that you select your tablet or mobile phone.. I would suggest a tablet which is bigger and better, 7 inch tablet would do anything bigger is better again depending on your personal situation and what you might have. You will then download two apps which are free and begin the process. The apps are on both Android and iOS linked below..

Once the apps are downloaded its a simple process throughout involving little input, Simple taps on the tablet with finger or indeed the stylus itself and changing the colours and it could not be simpler. It would be a learning curve for some or for parents who have not given technology a chance yet,there is lots out there and there is nothing wrong with it, it also gives you time with your kids or grandkids and so on and you can enjoy valuable time together using a new product which erases the mess that kids tend to leave behind afterwards. I think its a great idea and going forward it makes sense today to have such a product on the market as we are now in a digital era which includes schools I am sure they would love such a prodcut which is cost effective and just think of the hundreds of markers and crayons they would not have to clean up afterwards..

If you have any questions please feel free to contact us..

The Cons – The only cons I can think of is just adoption, We all like the touch and feel of real things but from looking at the digital age we are in now and going forward and more content embedded into the app would be great but as its new we can understand the stage they are at.

The Pros – No mess, Less space taken up, Cost, Kids getting dirty hands,face and clothes,Kids scribbling on walls and furniture, No paper waste or usage ( I know this from experience) or colouring books lying around, No searching for missing crayons or markers.