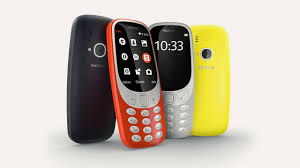 Update. 15/6/17, These are fake copy models and you should avoid at all costs and people have unintentionally bought them in anticipation.  They’ve also been taken down from site after I spoke to them on the phone. There is lots of fakes going around so be careful. If in doubt get in touch with us.
What to watch out for.

The packaging. It’s not a couple of the phones pictured and plain back. Real one hash splash artwork colour with one phone seen above.

Speaker on inside cover should be rectangular not square.

Orange/Yellow colour around the lens, it should be inside to be real.

Motherboard (Green in colour) is visible, not covered.

Back lit keys are white not blue.

Some housing variants are different pay attention to the keys and front fascia on top and finally the USB port placement.. It’s on the top, not the bottom.

Just a quick note if you are waiting on the all new Nokia 3310. It’s now available in the dual sim format costing €99.99 but I would be careful. It would be expected to be a bit more expensive considered its dual Sim but for this price I feel many will hold off until retailers stock it or wait for Argos to get stock in which is due the 20th June as they told us recently for €69.99 and also Dual Sim

Dual sim European version, The new Nokia 3310 takes the iconic silhouette of the original and reimagines it for 2017. The custom designed user interface brings a fresh look to a classic, whilst the 2.4” polarized and curved screen window makes for better readability in sunlight