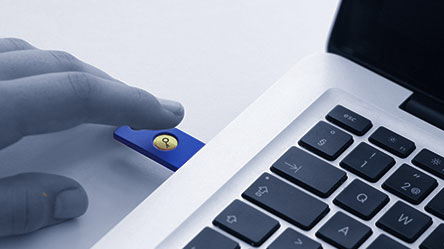 Did you know that phishing scams are the leading cause of cybercrime?

A report by tech security company PhishMe last year found a staggering 91 per cent of all cyberattacks in 2016 were triggered by a phishing email.

And the number of these bogus email attacks aimed at duping recipients into divulging personal or confidential information such as passwords or bank account details is rising at an alarming rate.

To combat this growing concern, tech giants such as Google, Facebook and Salesforce have introduced a new security device to their employees – and now it is available to billions of their users.

The YubiKey security key by Yubico eradicates the dangers of phishing attacks by adding an extra layer of login security to a range of leading websites such as Google, Facebook, YouTube, Dropbox, Salesforce and many more.

By employing two-factor authentication (2FA), the hack-proof USB stick works by requiring users to activate it after inputting a username and password to gain access to personal accounts. Without a password AND a YubiKey, access is denied, preventing anyone who does not have both from logging in.

Unlike two-step verification, which involves sending a temporary login code to a user’s mobile phone via text, the waterproof YubiKey, which is already used in 160 countries, removes the need for transmissions that can easily be intercepted by tech-savvy cybercriminals.

Having been adopted by staff at multinational corporations such as Facebook and Google, the compact YubiKey, which weighs just 3g and offers options for both computer system and smartphone protection, is now available to UK consumers from just £17.50.

We will have a review soon…