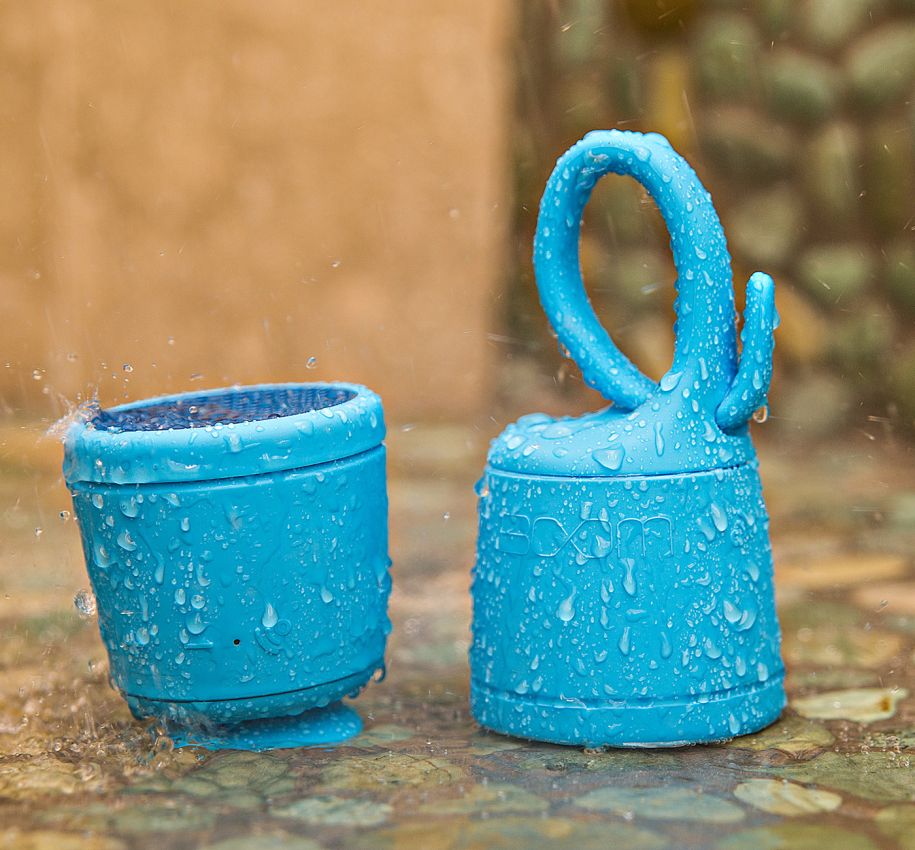 Hook it,Loop it, Set it or Stick it.. Yes this new gadget that arrived is for the outdoor fans and more with all the functionality it offers The Polk Boom Swimmer Duo is what we are checking out today.. Traditionally we are all custom to perhaps the speaker we just turn on and connect to out devices and jut leave them sat wherever they maybe but this speaker offers much more and it becomes part of your routine because it offers more than one way to use it..

I have a countless amount of Bluetooth speakers here and to be honest they are all lacking something… Portability ??? NO.. They in fact are portable but limitations soon crop up due to them mostly being free standing ones and have to be left in a particular environment or position. This speaker has a hook and a suction cup which allows you to place it in an array of places and it will be safe..

The package to start with is pretty cool,not your typical box type but a bottled product which is a nice touch and complements the package as a whole and meaning outdoors but you are not limited to outdoor use.In fact there is no limitations at home..

In the package we get some instructions,cable and the speaker itself with two attachments that simple twist on/off. One is a suction cup and another is a hook type that is bendy and twisty which can move in any direction to latch onto something you might like to place it..

It is tough with a rubber housing all round.. This is built to last its solid its shockproof,its waterproof its dust proof and has an IPX 7 rating which means its good for 3 ft of water for 30 mins or thereabouts. There is two attachments which still remain sealed which you will further on below. While testing I did drop it twice purposely to see if it would remain intact and it did, the drops where from head height and arms length just to be sure. Its solid…

By no means this is a speaker thats restricted as to where it can be placed. Even in the house…This will stick to surfaces with no problem and with the hook thats on a separate attachment it can be place just about anywhere which is very useful,You could attach it to your jacket or bag or even your bike, canoe or boat, there is no limits as to where it can be placed which I like very much, I even tried this at home in my house just to be sure that the suction works, Now keep in mind this is not light for something to remain to a wall and then add vibration on top of that.. This sticks and stays put…

Its got what we should expect to find in such a product yet offers more as a whole. We of course have Bluetooth connectivity, Volume controls and a Pairing button and a small LED status light. You can actually link these together if you had another one,something which we have seen in several speakers before but its nice if you happen to own more than one and get real stereo sound and separation. On the bulk end of the speaker there is a USB port and an inline socket which means you can attach an 3.5 mm audio cable..

You can take calls on this which is handy and calls are clear, Connecting is seamless and no loss of connection was seen during testing for around a week,the sound is excellent and it does get amplified for example when on glass or a wooden table and it gets better in these instances.

Overall this is a great little speaker and does what it says on the tin giving you no limits to where it can be placed, Its a clever idea and for such a small speaker the sound is quite good,better than I had anticipated to be honest and when amplied on wood or a window it sounds better,The buttons are tactile its easy to set up and jut works great even phone calls are good form the few I took when testing it out.. I can really fault it… Thats saying something.. Finally there is several colours to pipck from if you did not like our sample you can buy it in Sport Blue,Black Orange or Green see the link below.