Samsung said to give free VR headset with pre-order of the Galaxy S7. #Samsung #VR 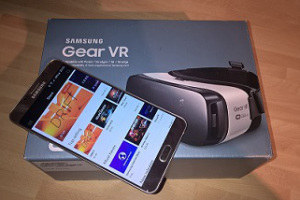 Samsung is said to be giving free VR headsets with the upcoming Galaxy S7. This is a good move from Samsung and in time for the onslaught of VR headset released that are coming this year. This would put the technology into peoples hands for free and even though they current VR headset can be got now cheap enough this would entice users to try out the technology which is quite cool yet limited with content..

Samsung is also keen on getting a piece of the growing VR market, and as suggested by Rory O’Neill, Vice President Brand & Product Manager of Samsung Electronics, most of the VR content will be in fact produced by the consumers. That’s why Samsung will be offering a free Gear VR headset with each Galaxy S7 smartphone or at least in the Netherlands.

For now this is a regional offer according to the report and it is something that should be made more available around the world,As is,it is hard to get the current VR headset and there is not much activity with operators even offering the piece with its customers,One network here in Ireland Meteor Mobile do offer the Headset as a bundle or you can buy it outright,this is a step in the right direction and something others should really look into..