LG announces a case for the LG G5 before the phone is launched. WTF? #LG #MWC2016 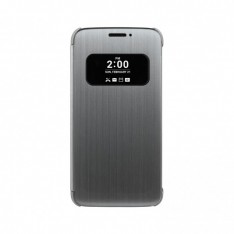 The LG G5 is due to arrive or be announced soon but LG have gone kinda backwards here with announcing a case for something that does not exist. This reminds me of something I did years ago. I bought my first DVD before I even had a DVD player. So to an extent I can relate somehow. Anyway this is what the case looks like and can be seen along with the much anticipated G5 at MWC soon.. Even LG have no quams about this themselves by saying

“Introducing a Case for a Smartphone That Does Not Officially Exist”

The latest LG Quick Cover offers the advantages of previous Quick Covers but with even more features. The touch function, recently introduced on the K10’s Quick Cover View, is now available on the G5 Quick Cover’s semitransparent mesh cover. It enables users to take calls and control alarm settings without opening the case for the ultimate in convenience.

The G5 will also have a feature which was seen before which is called “Always On Display” Again something we have seen years ago from Nokia..Oh dear….. Dont follow Apple LG and try claim/rename others good work because I do like LG devices..