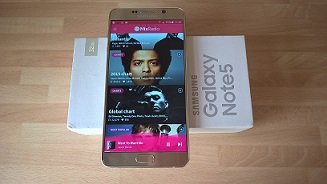 The Samsung Galaxy Note 5 has arrived and its took its design from the Galaxy S6 line up,,This however did not bode to well with fans of the Note range due to the lack of a removable back cover and no option to expand memory but this is a trend that is growing and something we may have to adapt to,with cloud storage been pushed more so now many are not sold on the idea but it is growing and find myself using it now more so than before..

The device is nice to hold in hand though much more comfortable than the old versions due to its curved edges which sit nicely in hand,also we have a fingerprint sensor on the home key which also doubles as a camera key which requires a double tap to activate the main camera which is 16MP and shoots really nice photos..

The Note 5 alongside its siblings the Galaxy S6 range all look quite alike and internally the software and UI remains the same,the Note 5 however has seen its battery size been reduced from previous iterations,this is now at 3000 mAh but the Note 4 had 3220 mAh which is a step back especially in 2016, A 3000 mAh battery for a powerful phone such as the Note 5 is a little underwhelming and something that is a tad annoying considered its past versions.

Check out the unboxing below and excuse us for the poor voice,a tad under the weather and any questions feel free to ask us here or on Twitter..