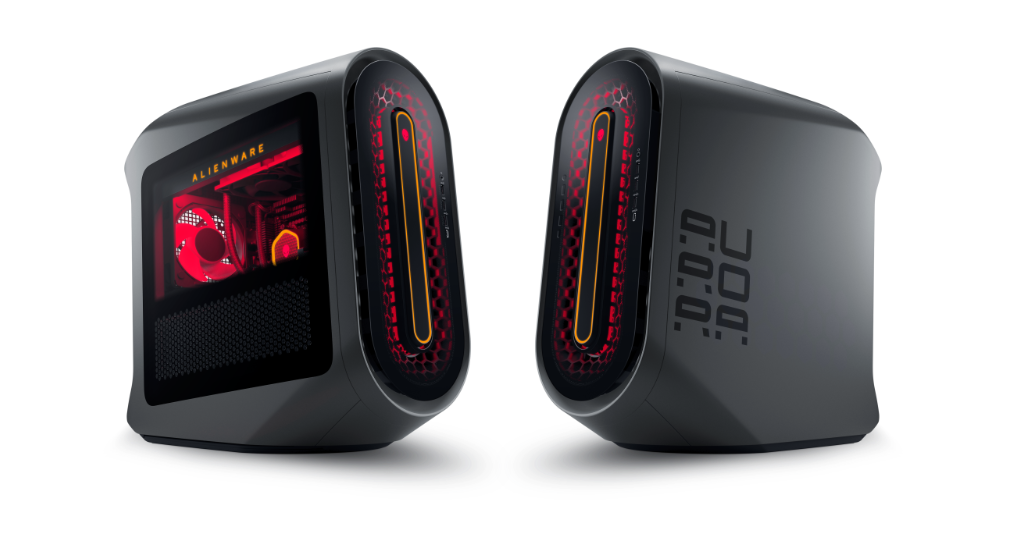 Alienware and Dell revealed at CES 2023 six new gaming laptops, along with the world’s fastest refresh rate of 500Hzi on a Fast IPS Gaming Monitor and the evolved Aurora R15 gaming desktop with AMD technology.

Alienware M Series is designed for gamers who prioritize performance. Rising to that challenge are the all-new Alienware m18 and Alienware m16 powerhouses.

Alienware’s most powerful laptop, the m18ii, is in a performance class of its own, with customization options that span the gamut of new CPU and GPU technology. This includes up-to 13th Gen Intel Core i9-13980HX processors and the full stack of next-gen NVIDIA® GeForce RTX™ Laptop GPUs, plus soon-to-be-announced next-gen AMD Ryzen™ Processors and Radeon™ Graphics for mobile. All this performance is enabled by a suite of major Alienware Cryo-tech™ advancements.

These significant improvements to platform thermal capacity (~35% using Full Speed modevii) and cooling pave the way for higher-performance CPUs and GPUs, allowing us to push the total system power to 250Wviii.

Introducing the most luxurious Alienware yet, the first-ever x16

X Series laptops are designed for gamers who expect their Alienware laptop to compliment every aspect of their lifestyle, including beyond gaming. X Series serves as Dell’s innovation portal, bringing many technology breakthroughs in addition to elevating premium materials, finishes and features to the forefront of the product experience.

The new Alienware x16 is the first 16” gaming laptop since 2004 and Dell’s most premium Alienware product yet. Promising more performance, a taller 16:10 display and an improved six-speaker design, the new x16 bests our current x17 in almost every way and does so in a sleeker and more robust full-metal chassis.

Built with top-firing tweeters for clarity and a dual woofer configuration for strong bass, x16 creates a spatial audio experience with its 6-speaker audio. With Dolby Atmos, users will experience rich, layered sound that reveals depth, clarity, and details like never before.

Taking a bold new design approach, the G15 and G16 are available in eye-catching colorways, with retro pops of orange and blue set against premium metallics, that are sure to be coveted by those with an appreciation for ‘80s pop aesthetics. Both feature the G-mode key, exclusive gaming function macro keys, and toggle audio keys to enhance the player experience. G15 offers one-zone and four-zone RGB keyboard options with numpad, while G16 offers one-zone RGB and Cherry MX keyboard options.

Looking under the hood, G15 and G16 supports graphic-intensive games with ease and consistency, even in marathon sessions, powered by the latest Intel, AMD and NVIDIA technology to help users get lost in their favourite games. And for the first time, G Series receives Alienware inspired Vapor Chamber Cooling and Element 31 thermal interface.

Commenting on the new gaming laptops, Ryan Gu, Alienware Product Director, said: “As what defines preeminent gaming experiences constantly evolves, Alienware and Dell continue to set itself apart with meaningful high-impact innovation that meets the changing needs of gamers. Whether you’re a competitive or hobby gamer, if freedom without compromise is what you value most, look no further than our intrepid new fleet of high-performance laptops.”

Gu also spoke about the design framework behind the releases: “In 2019, we made a bold move to undergo a complete portfolio redesign to distinguish Alienware’s brand identity from the industry. At the time, the landscape was swarmed by red and black machines. It was at that time we chose to charter a new course for Alienware and retire the iconic space-age identity of our Epic design language.

The journey began with our design team sifting through endless scores of Sci-fi lore and artwork across a variety of mediums (comic books, games, illustrations, and film). The goal was to project the iconic AW design 30 years into the future. This led us to our current design framework, known as Legend.

Following up on these releases, the Alienware line has been further enhanced at CES 2023 with the Alienware 500Hz Gaming Monitor and the Aurora R15.

Designed for competitive gamers, the 500Hz Gaming Monitor also offers new functional elements such as a built-in retractable headset hanger and new hexagonal base structure which occupies a smaller footprint so users can place their gaming keyboard and mouse to their convenience and just focus on slaying the competition.