Whilst dating apps are a great way to meet new people, they present significant privacy risks which are often overlooked when we are busy looking for our future significant other.

One of the biggest issues with dating apps is that, unlike most other apps, they request a lot of sensitive information from their users to build a profile. Often this includes basic information such as your name, age, gender, and date of birth, however, the research revealed that this can also include a lot more personal information such as religious beliefs, sexual orientation, drugs and alcohol use, whether you have/want kids, height and weight.

Although this is important information to the experience on the app, leakage or disclosure of this information could expose users to all kinds of threats, including hackers and scammers who have been gaining access to people’s most sensitive information to trick them into sending payments.

With this in mind, experts at MoneyTransfers.com have analysed 15 different dating apps to identify which apps share the most of your sensitive information with third parties, collect for their own marketing and which have the longest privacy policies to find the most invasive dating app overall.

The dating apps that share the most data with third parties 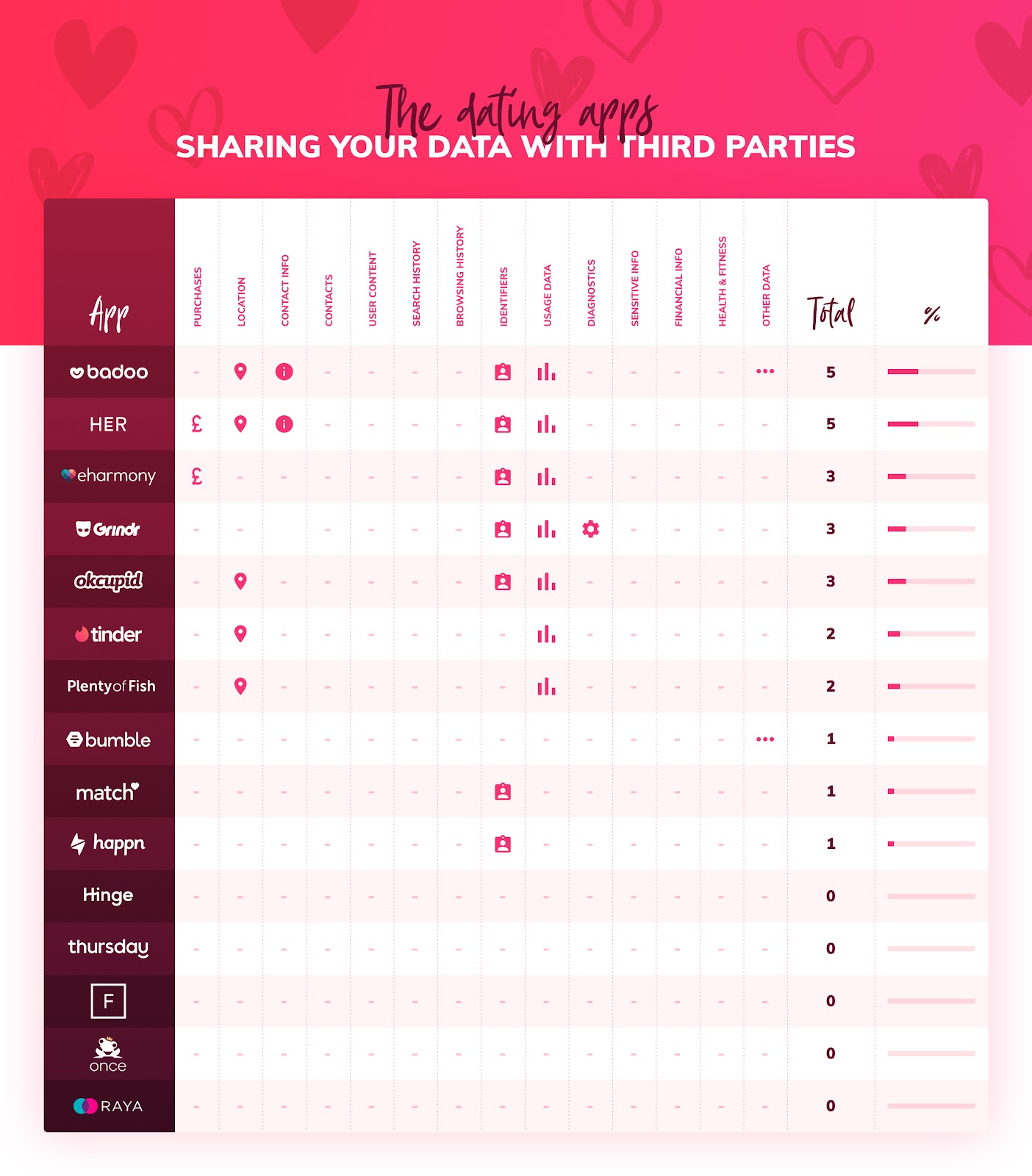 In joint second place were eharmony and Grindr who shared 21% of their users’ data with third parties and in third place came Tinder and Plenty of Fish who both collect 14% of users personal data to share with third parties.

Out of the 15 dating apps investigated, there were 5 apps which did not collect any of their users’ personal data to share with third parties. These apps were Hinge, Thursday, Flava, Once and, the exclusive celebrity and influencer dating app, Raya, meaning that as far as their users are concerned, none of their personal data is being shared with third parties and is being used solely for the purpose of their own marketing or analytics.

The dating apps that use your personal data to track you

The data collected to track you include contact information like name, address, mobile number and also location data, meaning apps can share device location data or email lists with third parties. In order to show nearby potential matches, the majority of the 15 dating apps we investigated track user location through the device GPS and Wifi. This does raise concerns that several apps at a time can track down users, with only minimal location data available. 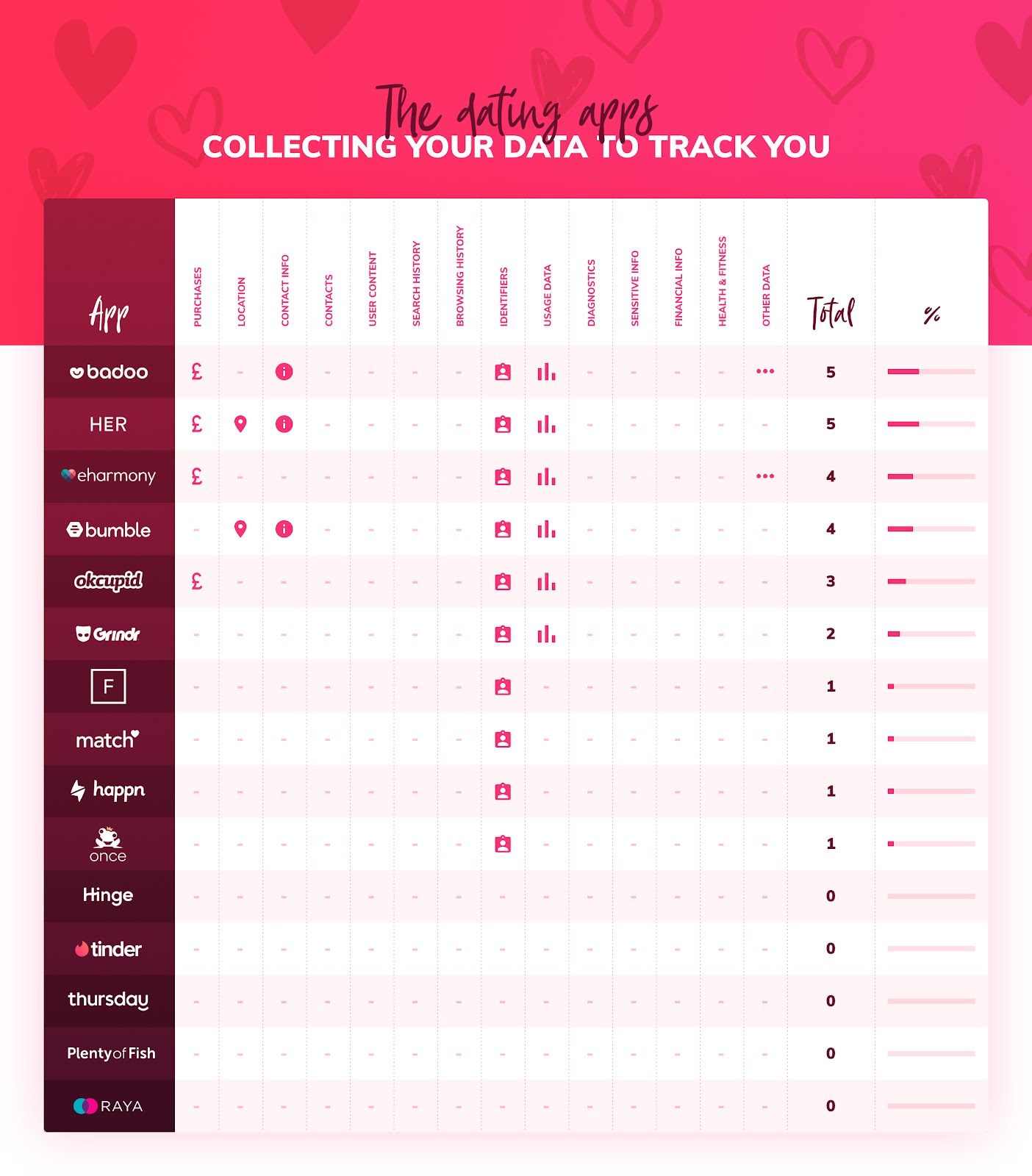 The research revealed Badoo and HER were the worst two apps for using their users’ personal data to track them, collecting 36% of users’ data. This included data such as purchases made, contact information, location, usage data, “other data” and identifiers.

In joint second place were eharmony and Bumble who collect 29% of their users’ data for tracking purposes. In third place came OKCupid which used 21% of users’ data to track them. This is a scary amount of data that dating apps are selling to other parties, including data brokers or advertising networks.

Apps also collect your data for their own benefit which involves their own marketing. Developer’s advertising and marketing on an app involve their own ads popping up on other apps, sending marketing communications, and in-app promotions. 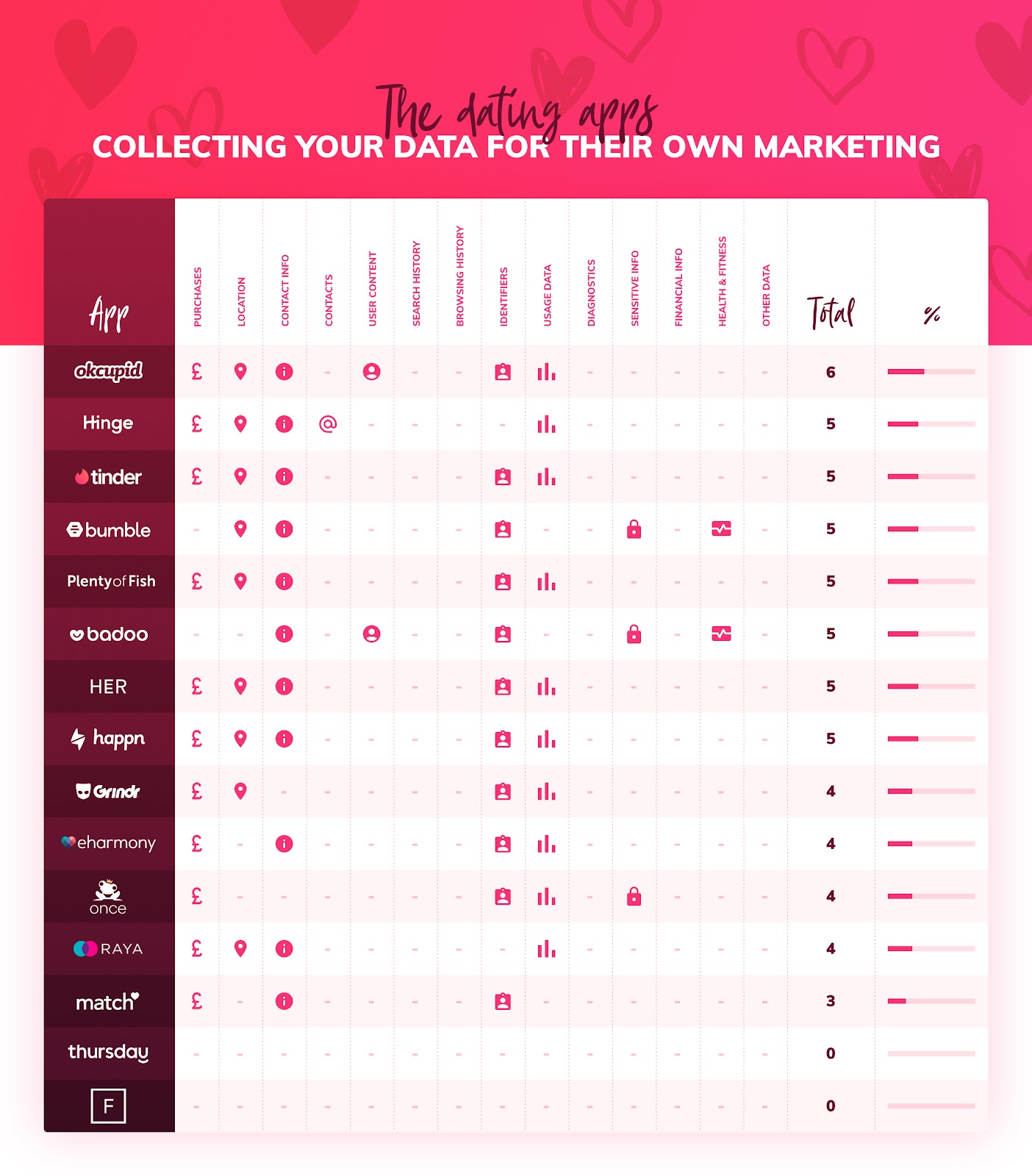 There were several apps which collect 35% (which was the second highest amount) of users’ data for their own marketing and advertising purposes. These apps included Hinge, Tinder, Bumble, Plenty of Fish, Badoo, HER and Happn.

In third came Grindr, eharmony, Once and Raya who all collect 28% of users’ data for their own personal benefit.

Overall, based on how much data the apps collected in total, for selling on, keeping for their own benefit and for tracking you, the least private dating apps included Badoo and HER in joint first followed by OKCupid and eharmony in second and third.

Dating app Thursday, which only launched in 2021, was revealed to be the safest dating app to use when it came to the safety and privacy of personal data. According to the research, Thursday collects absolutely no data on their users for either their own personal benefit or shared with third parties.

In second place came Flava which collects no user data for third party marketing or their own marketing and just 7% to track users. Surprisingly, in third place came one of the most popular dating apps, Tinder which only collected a total of 28% of users’ personal data with none of their users’ data collected for tracking purposes.

What Education Apps Would Enhance Your Academic Performance

Why Flutter is The Next Big Thing in Mobile App Development!