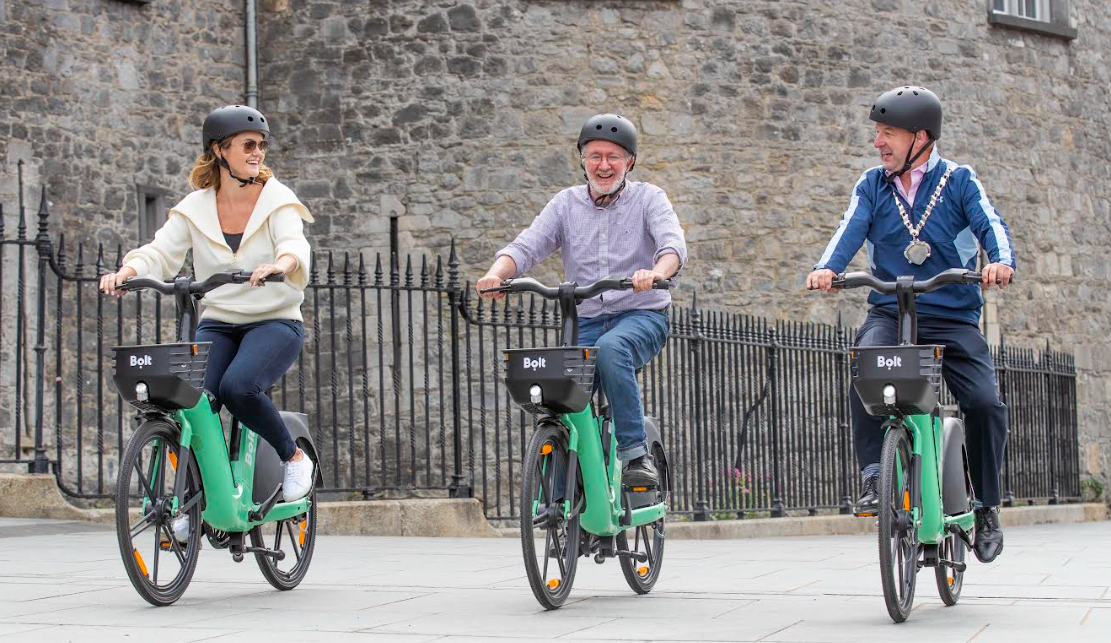 Bolt, the European mobility champion, today announced it will launch its second electric bike scheme in Kilkenny ahead of the Kilkenny Arts Festival starting on August 4th.

The 80-bike pilot will kick off in the coming week and will trial new virtual parking solutions to provide both flexibility and ease of use for cyclists and ensure the scheme is mindful of pedestrians and other road users.

This service will help to deliver on the Kilkenny City and County Development Plan 2021 – 2027, which prioritises sustainable transport and continued development of walking and cycling infrastructure in support of the 10-minute city concept.

Caitriona Corr, Cycling Officer with Kilkenny County Council, said, “We are delighted that people will have another choice of transport in Kilkenny.  It has been shown that e-bike users cycle further and more often so the benefit will be not just to our city but also people’s wellbeing. e-bikes can be of great assistance to people with reduced mobility and can make more arduous journeys very enjoyable.”

Bolt has continued  to strengthen its Irish team with the recent appointment of John Buckley as Operations Manager for Rentals in Ireland, who said, “Kilkenny is our second Irish market and one where we believe e-bikes can make a transformational difference to travel options and wellbeing. We are also conscious that Kilkenny is a medieval city and as such presents new challenges from an operational perspective. The learnings we will gather from Kilkenny will give Bolt a stronger understanding of the concerns some Local Authorities may have when it comes to introducing shared e-bike schemes into the public realm where space may be limited, and will leave Bolt as an experienced operator of such.

Buckley added, “Electric bikes play an essential role in reducing the reliance on private vehicles when travelling short to medium distances. We are keen that our e-bikes provide sustainable and affordable solutions in regional towns and cities too — there is no reason that such services should only be available in the capital.”

The launch marks Bolt’s second e-bike launch after it launched in Sligo earlier this year. The Sligo pilot has proven highly successful in its first month with 14,633 kms travelled by electric bike in the town in the first month alone — the equivalent of cycling from Sligo to Australia.

Bolt is a leading European mobility champion operating a range of services including e-bikes, eScooters, ride-hailing and car clubs for over 100 million people across 200 cities. The company currently operates ride-hailing taxi services in Dublin and Cork and is seeking to bring electric bikes, and in time, electric scooters to cities and towns across Ireland. The launch in Kilkenny comes as part of a wider push for Bolt to deploy 16,000 e-bikes across Europe in 2022, following recent fundraising.

Bolt will commit up to €5m in its bid to roll out e-bike operations across Irish cities and towns. Up to 2000 bikes are available immediately following Bolt’s recent fundraise and investment in micromobility with founder Markus Villig recently committing €150m to expand its light vehicle fleet across Europe.

How to rent a Bolt e-bike

To rent a Bolt e-bike, users need the Bolt app, available on app stores, and a payment card tied to an account.

Follow these steps to start riding a Bolt e-bike:

Continuing Bolt’s reputation of offering affordable micromobility service across continents, Bolt is the most affordable provider of shared electric bikes in Ireland, thanks to having low rates and no unlock fee. The per-minute rental price is the lowest on the market at just 0.15 EUR/minute during the launch campaign.

The e-bike is also equipped with a functional dashboard providing information about speed, battery level and speed zones, showing the user all the information needed to enjoy the ride. Bolt e-bikes are equipped with high-precision GPS which helps users find the bikes easily on the street.

Bolt has also launched the in-app cognitive reaction test which aims to prevent users from riding an e-bike or scooter while intoxicated. If a customer ‘fails’ the test the app encourages them to choose other means of transport e.g. taxi. The test is an added safety layer designed to protect both riders and pedestrians.

The new e-bike model introduced by Bolt has a long lifespan of up to 5 years, which makes it highly sustainable. The e-bike is also produced from 100% recyclable aluminium. Integrating a swappable battery in the e-bike’s design results in fewer operations needed for battery charging. This translates into a decreased overall carbon footprint since the e-bikes do not need to be frequently transported to a warehouse for charging. The high-capacity battery additionally offers a range of up to 90 km per charge.

The e-bike also features beginner modes permitting max speeds of up to 15 km per hour, which can be activated in the Bolt app. Geo-fencing technology enables the prevention of high speeds in designated ‘go-slow’ zones where pedestrian footfall may be high, such as the High Street and the Parade.