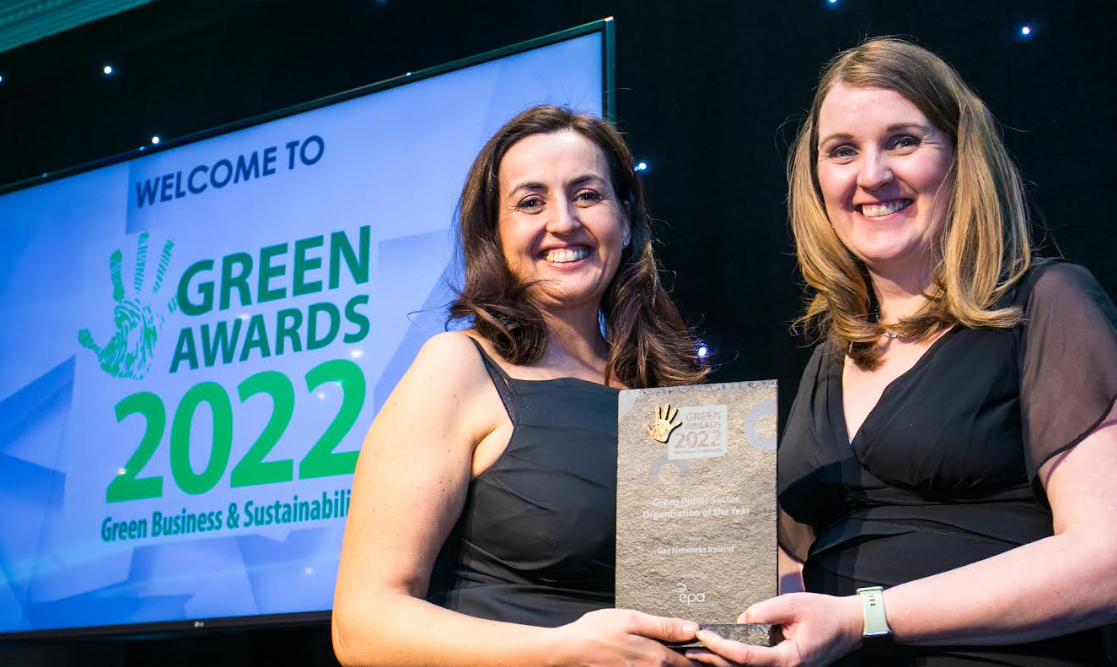 Following another successful year delivering on its holistic sustainability programme, Gas Networks Ireland was named Green Public Sector Organisation of the Year at the 2022 Green Awards at the Clayton Hotel on Burlington Road in Ballsbridge..

The semi-state utility was also shortlisted for the Green Energy Provider Award and to retain its Green Large Organisation of the Year Award for a third year, which were won by SSE Airtricity and An Post respectively.

Additionally, Gas Networks Ireland was selected by the judges to be one of six organisations shortlisted for the Green Business of the Year Award – an award it won last year, but was deservingly won this year by Hotel Doolin.

“We are delighted to be recognised for our contribution to sustainability and our commitment to maintaining the highest standard of excellence in our operation of the gas network. We are extremely proud of all our staff for their hard work, passion and continued dedication,” Ms Moore said.

“Sustainability is very important for Gas Networks Ireland and we aim to deliver our services in a sustainable manner that contributes to the protection of the environment while supporting the social and economic development of the communities we operate in, as well as the wider economy.”

One of only 46 companies in Ireland to hold a Business Working Responsibly Mark, Gas Networks Ireland was also recognised for “taking coordinated action on climate issues” and achieved a ‘B‘ in the Carbon Disclosure Platform (CDP) global emissions ratings, exceeding the global, European and sector averages to finish in the top quartile of all businesses assessed globally.

Ireland’s national gas network is considered one of the safest and most modern gas networks in the world and will play a crucial role in Ireland’s cleaner energy future.

The semi-state utility advanced its journey to a decarbonised gas network with approval from An Bord Pleanála for Ireland’s second renewable gas injection facility in Mitchelstown, the development of a hydrogen research and development facility in Citywest and the opening of its third and fourth public compressed natural gas (CNG) refueling stations in Limerick City and Clonshaugh.

“Climate change is one of the most urgent global challenges we face and as the operators of Ireland’s gas infrastructure, sustainability is a focal point of our plans to decarbonise the gas network in line with national and EU policy,” Ms Moore said.

In a European first, the company partnered with environmental group, Leave No Trace Ireland, Coillte and the Burncourt Community Group to help restore Glengarra Wood in Co. Tipperary as part of the international “Hot Spot” programme.

The organisation also backed over 52,000 hours of social inclusion and environmental education initiatives within communities across Ireland, with staff completing over 890-hours of volunteering.

“As a business, we are on a continuous journey to reduce our emissions and continue to support and promote biodiversity within our communities,” Ms Moore said.

Gas Networks Ireland’s fourth annual Sustainability Report, which is in line with the Global Reporting Initiative standard and includes more highlights from 2021, will be published later this quarter.