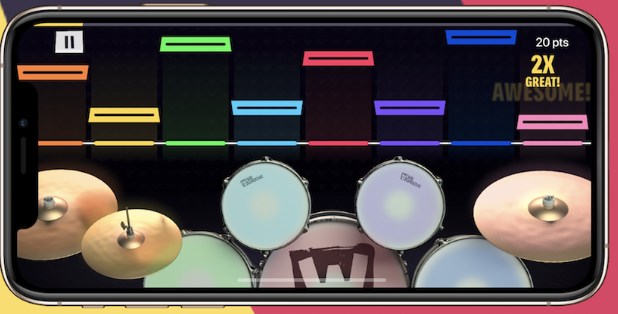 The WeGroove app turns any smartphone into a drum teacher. Ideal for those starting out in drumming, those looking to improve their existing technique or anyone who just wants to have fun, WeGroove allows users to drum along to their favourite track. Users can choose from hundreds of songs from well-known artists including ACDC, Queen, Led Zeppelin and more. Users can play the drums on WeGroove either with their fingertips or by connecting to an electronic drum kit.

The interactive drumming lessons within the WeGroove app have been designed to aid better and faster progression for those learning the drums. What’s more WeGroove can help users form a band with their buddies by allowing them to play alongside their friends online too.

The WeGroove app will also release a host of exciting features in Spring 2022 including:

Jerome Dron, Founder of Redison said: “It’s so much easier to learn an instrument when you can do it with songs you already know and love. Not only is it more engaging, it makes it more fun. Being able to play alongside your friends despite your location is a feature we know users will love too. The WeGroove app is the first step in our plan to develop the learning side of our company. Our aim is to make learning the drums as easy as gaming.”

The WeGroove app is available to download for free on the App Store and Google Play.

The next generation of electronic drums, Senspad is an ultra-portable wireless and connected drum kit that makes drumming more accessible than ever before. The first ever multizone drumming pad, Senspad is wireless, smart and scalable.

A modular solution which can be set up in less than two minutes, Senspad has different configurable zones so that users can customise it to sound like their favourite drum kit. Integrated LEDs guide the drummer to play in time to the rhythm as well as complete exercises that aid better technique, helping users work on their dexterity, coordination and precision

Senspad connects to smart devices so that users can have all the features of a high quality digital drum set on their phone or tablet. Waking up the neighbours at midnight while jamming is a thing of the past as the Senspad plays the drumming noise through headphones and the sound on the pads is minimal. This allows users to practice and follow along as well as save and share their session so they can track their progress.

Jerome Dron said: “Despite its huge popularity drumming has always struggled to become more mainstream for learners due to the size and noise of the drums. That’s why we created Senspad to allow musicians the chance to drum anywhere and at any time. Not only can people now have more opportunities to practice, they can also use our technology to improve their technique.”