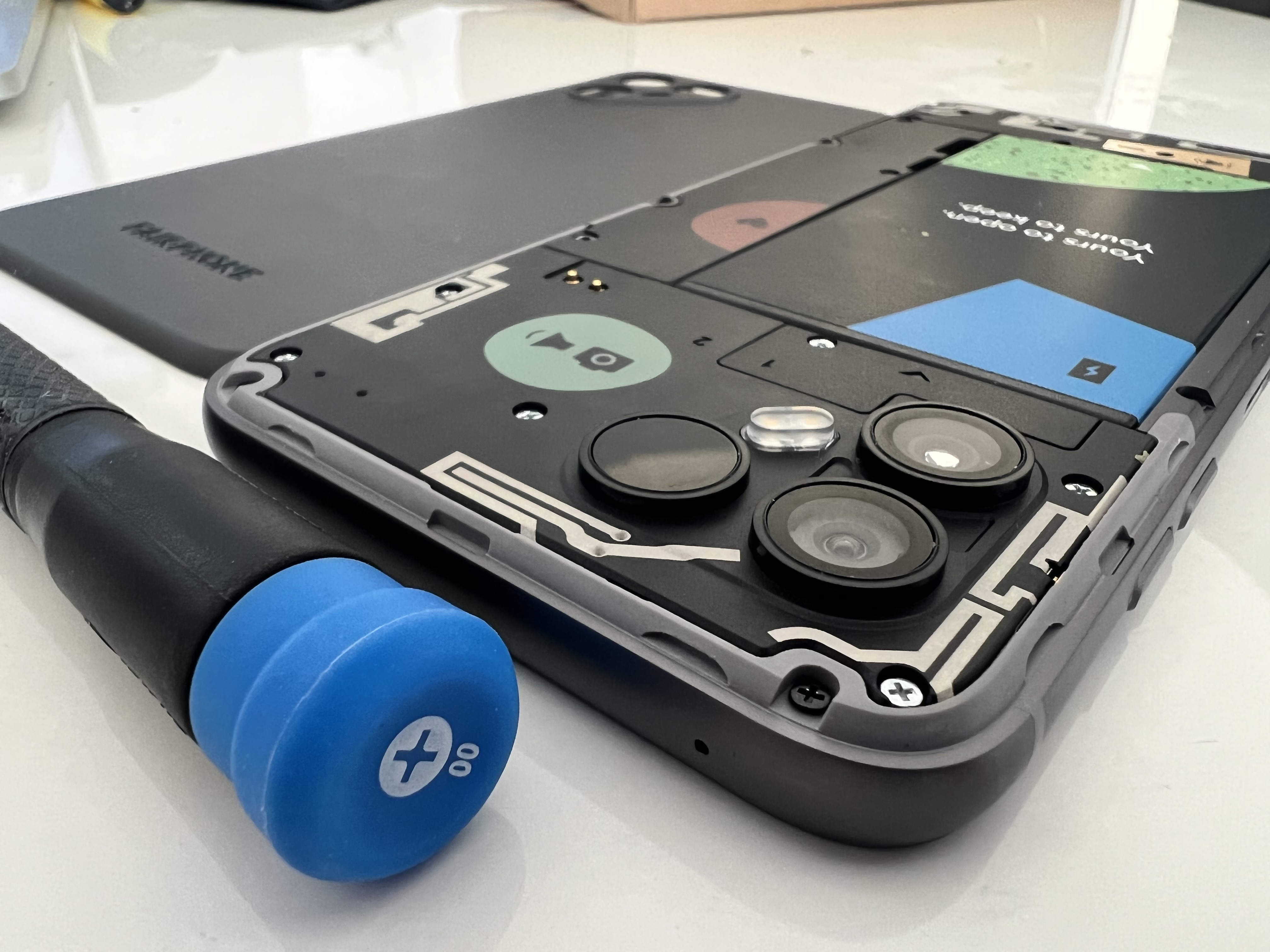 The Fairphone 4 is the latest phone on offer from the company and the big difference here between this phone and others is the ability to repair the device yourself and called a modular device, alone this also sparks another conversation which is the right to repair in which we are now seeing things happen whereby it will allow customers to repair their phones themselves or replace parts and this is where Fairphone stand out from the crowd here and not only recently either, the company have been doing this 7 years.. Fairphone are also known for sustainability too using 14 key materials from sustainable and fairer sources

The phone itself is a pretty standard build and on the bigger side with a 6.3inch screen and a thickness of 10.5mm which is thicker than most however it feels solid in the hand and sturdy even though the back cover is plastic and removable which is a rare thing these days it but here is how you access the parts.. It has bezels all round with a slight teardrop up top which may annoy some folk but when you have bezels all round you get the full use of the screen estate and being a bigger phone it makes sense as for many it would be a two handed device but having said that it is a comfortable phone to hold with rounded edges and no sharp corners.

There is no headphone jack present here and on the right side is where all the action is with the volume toggles and power/on/off key which doubles as a fingerprint sensor, there is no tap to wake here or face unlock so you will be using this touch key to access the phone which some folk have complained about in the unboxing video below which has garnered much comments and thoughts on the phone.

On the bottom of the device you have a speaker and USB-C port and a mic so overall it is a clean to the point phone in my opinion though lacking in some other features at this pricepoint.

UNBOXING AND WALKTHROUGH THE FAIRPHONE 4

Qualcomm Snapdragon 750G, Fairphone OS based on Android 11, 6 GB/GB ram options, Storage comes at 128/256GB with micro sd card expansion, IP54 rated, Screen, 6.3in FHD+ LCD (410ppi) and cameras are a dual affair 48MP rear, 25MP selfie camera which is looks like many other offerings out there however there is a corner sliced off and no where near a bump like the others, there is a slight rock on a flat surface but only if you touch the far upper left hand side of the phone.

OK they are not going to win awards here however this is not what the company wants to do either but give a fair price phone that just about does everything and they do this overall, the camera specs is what many people like and is the b all and end all of a phone which is polarising for me, I like a phone that gets the job done, I use an iPhone 13 Pro and Galaxy Z flip 3 as faily drivers but could use this phone too should I need too I am lucky to have access to many phones on the market and my current daily drivers change all the time and for the last while I have been using another smartphone alongside this and again the same applies, it is a cheaper handset and like I have said before the need to spend over a grand on a phone is long gone.

The camera performs better in the day and at times I have noticed shutter lag and again it is not the only phone to have seen this happen, once in bright well lit areas it will do well some images felt a bit washed or overexposed and you can tinker with image editors to get a better result, at night well its not great and I hate to say things like that but it is the case here and again the same is said about another device I am testing and it is part and parcel of phones priced similarly but it has to be said some more expensive phones can be worse off here, the video below will let you see and make your own call here anyway but  it does a decent enough job but more so in good lighting conditions.

It performs pretty well there was some lag here and there on multitasking and scrolling but overall done fine for the tasks I use and I am a power user with any phone I use and test battery was decent easily getting me through a day no problem the 3,905 mAh battery is replaceable and can be charged to 50% in 30 minutes (with minimum 20W charger) two days was a push given I work with two phones normally but when testing just over a day was average using this phone as the main device for my work social media and more.

The phone is not out to set any records and the company has a different approach than others but want to get a message across and save the planet whilst doing so and this is a good move and more should be doing it, e-waste is a huge problem and we are all guilty of it but they other main key thing is here is the option to repair the phone yourself. Look here for the price at the parts and see for yourself. To top things off you get 5G speed which requires a 5G sim but that is something I would stay away from for another year at least in Ireland,plus you get the additional 5-year warranty.