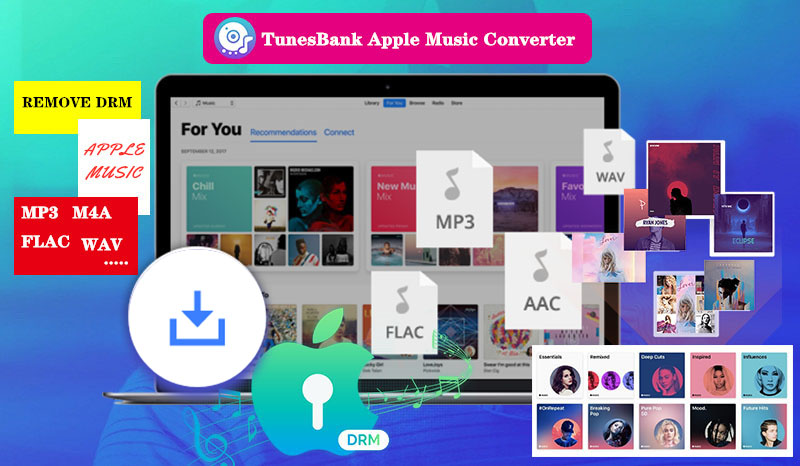 Apple Music is one of the top music streaming services in the world. You can pay a fixed charge periodically to access more than 90 million high-quality Apple Music songs in the Apple Music Library for free. For Apple Music users, you can not only stream popular Apple Music playlists such as Apple Music 1 and Apple Music Hits online, but also download these desired songs for offline playback. Besides you can use Apple Music App on Apple devices, you can also install it on any Internet-connected device, such as Mac or PC computers, iOS or Android phones and tablets, etc. But when you want to transfer and play Apple Music to MP3 players, CD player and other devices which is not have network supported, the things get tough.

Why You Need an Apple Music Converter?

Under such circumstance, if you want to keep Apple Music forever even if you cancel the Apple Music service, you need to convert Apple Music to MP3. After converting Apple Music songs to MP3, so that you can listen to Apple Music on any device freely.

TunesBank Apple Music Converter can works perfect on Mac and Windows computer, it is specially designed for all Apple Music users to remove the DRM and convert Apple Music songs/playlist/albums. It uses the advanced music decryption technology to unlock the Apple Music DRM protection and re-encode them into various popular audio file formats, including MP3, M4A, AAC, FLAC, etc. In this way, you can download and convert Apple Music to common files which can be compatible with any device and player. Surprisingly, this tool applies to iTunes as well. All of contents of iTunes, such as music, audiobooks can be converted to MP3, M4A and other formats, too. Moreover, the ID3 tags and metadata info will be saved well in output files, which is convenient for users to manage the output files.

Next, we are going to introduce you the outstanding features of TunesBank Apple Music Converter in details.

DRM technology is used to prevent users from transferring Apple Music to any device that’s not related to Apple. TunesBank Converter adopt the advanced audio decryption technology, it can help you remove DRM from Apple Music and iTunes music or audiobooks with ease. So that you can get the rid of Apple Music DRM encryption, and listen to Apple Music at anytime, anywhere.

As we mentioned above, Apple Music adds DRM protection to all tracks and encoded as M4P format. And M4P is not compatible with the most of devices and players. TunesBank are able to satisfy Apple Music users who wants to freely enjoy Apple Music on any device. It supports to convert Apple Music to popular formats, including MP3, M4A, AAC, FLAC, AC3, AU or AIFF to meet the different needs of users, such as SanDisk MP3 Player, Sony Walkman, iPod Nano/Shuffle, Kindle, or burn to CD and transfer to USB stick ,etc.

The output quality is the question that users care about most, it is related to the auditory experience. TunesBank uses the superior virtual sound card to preserve Apple Music original audio data without touching any quality. Moreover, if you are a picky ears of music, you can customize the output quality according to your needs, such as adjust the sample rate to 44,100 Hz and bit rate as 320kbps.

There are many Apple Music Converter on the market, but they just record the audio from Apple Music. TunesBank is not the same, it can save the ID3 tags and metadata information in the output Apple Music tracks, such as title, name, artist, album name, genre, copyright, cover, etc. With its assist, users can manage the output files conveniently.

After knowing so many wonderful features, TunesBank are able to provides lightning conversion speed for users. It can run up to 10X speed on Windows and 5X faster conversion speed on Mac computer. Except for conversion speed, it can also supports to multi-task convert Apple Music. With these functions, you can convert a Apple Music playlist or album at in a few seconds, which save you a lot of time.

After the installation of TunesBank Apple Music Converter, a easy and concise interface will come into view. Its user interface is kind of like iTunes, which will make you feel familiar. And TunesBank has the functions of detect and load Apple Music & iTunes playlists automatically. Besides its user-friendly interface, the operation of TunesBank is straightforward that any one are able to grasp immediately.

TunesBank Apple Music Converter is suitable for both Mac and Windows computer operate system. It can support Windows 11/10/8.1/8/7 (32 bit or 64 bit) versions. And for Mac version, it can support Mac OS X 10.12 or higher. You can select the proper version according to your computer.

How to Convert Apple Music to MP3

Before you starting, download and install the TunesBank Apple Music Converter on your PC or Mac computer in advanced, then double-click the TunesBank to open the program. Then the Apple Music App (MacOS 10.15 Catalina and above) or iTunes application will be automatically opened at the same time.

Please hit on the “Refresh” option from the left side, then all Apple Music tracks will load in the main interface. You can select and import Apple Music files you desired from them and tick the checkbox in front of each song.

Under the bottom of TunesBank, you can adjust the output settings depending on your needs. TunesBank offers various popular formats for you to choose. And you can also customize the output quality, output folder, codec, bit rate, sample rate, channels, etc.

When all settings are ready, press on “Convert” button to download Apple Music to computer. The indicator progress bar will show the music files which are converting. TunesBank lets you to return to the “Library” and import more songs to “Converting” list to convert.

Once the downloading is completed, you can go to “Finished” tab to view all the output songs, touch on “View Output File” button to locate the output files.

TunesBank Apple Music Converter is very cost-effective, the single license is $39.95. You can use it forever on 1 computer. And if you want to share the program with family, you can try family license which is available for 5 computer, just costs $79.95 for lifetime use.