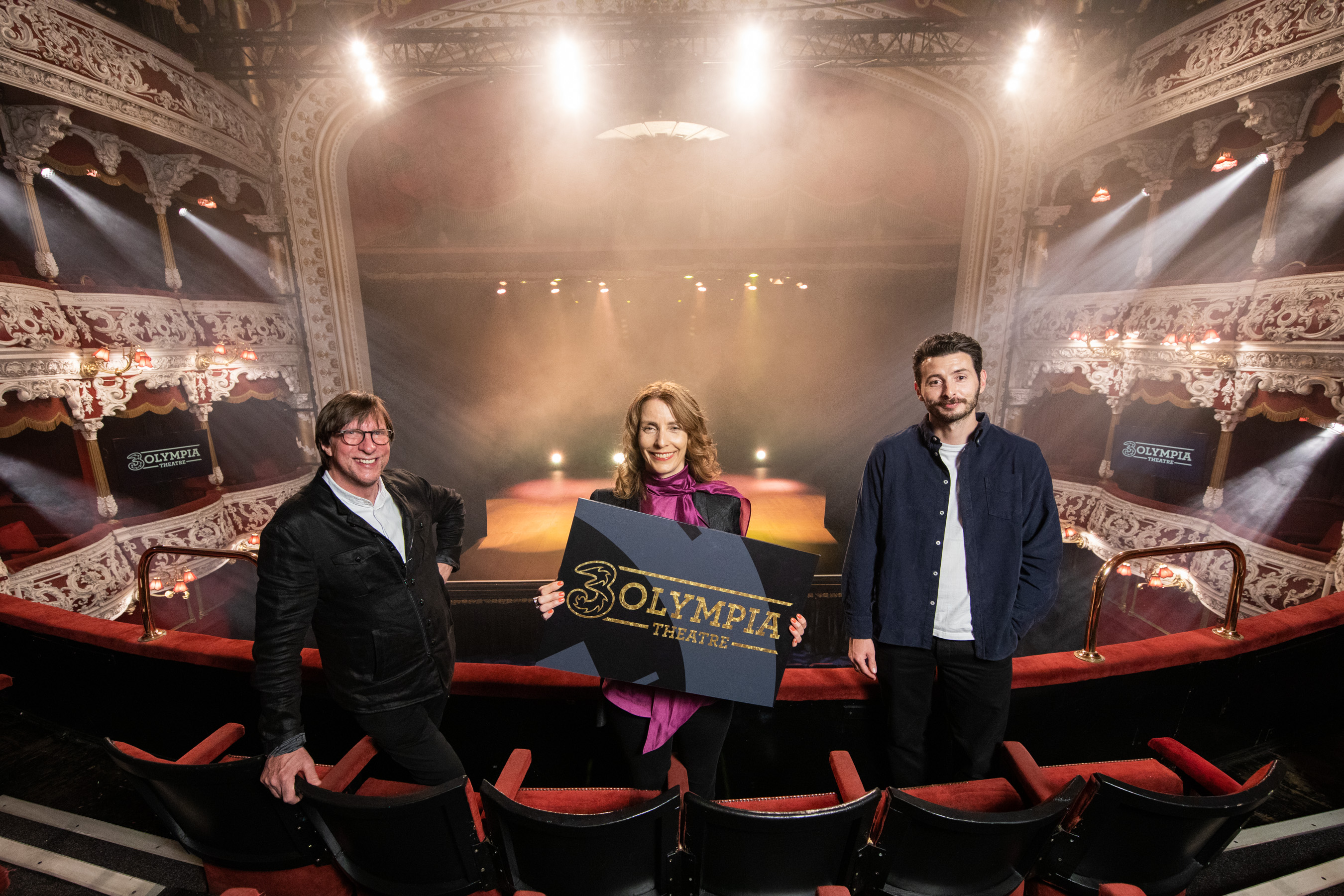 Three Ireland has today announced an exciting new partnership to become primary sponsor of one of Dublin’s most renowned music, arts and entertainment venues, the Olympia Theatre. The sponsorship will run over an initial eight-year period and see the venue renamed to ‘3Olympia Theatre’. The investment of this partnership will provide support to the historic venue as it prepares for its reopening, ensuring the overall heritage & rich history of the building is preserved for years to come.

Three is one of the leading sponsors of live music and entertainment in Ireland today, including title sponsor of 3Arena as well some of the country’s biggest festivals, Electric Picnic and Longitude and today’s announcement reinforces its commitment to music in Ireland. This new partnership between Three Ireland and the Olympia Theatre will complement its existing sponsorships, providing further support to Ireland’s flourishing music scene.

Three Ireland is committed to providing a more connected life to its customers, and this sponsorship is a perfect example of how Three will offer their music loving customers the best seats in the house. Three customers will receive exclusive benefits to events at ‘3Olympia Theatre’. Through the 3Plus app, Three customers will have access to pre-sale tickets, 48 hours before being available to the public as well as special money can’t buy experiences.

Commenting on the announcement of the partnership, Elaine Carey, Chief Commercial Officer, Three Ireland and Three UK said, “We are extremely excited to announce our new partnership as title sponsor of 3Olympia Theatre. As Ireland’s number one live music sponsor, we understand the importance that music and theatre play in the lives of our customers, and we want to ensure that they have access to the biggest and best experiences. This new sponsorship brings a wide range of benefits to Three Ireland customers, offering unrivalled access to some fantastic live events, which is something that is hugely important to us.

Despite the challenges posed by Covid-19, music and the arts still remain an important part of our customers’ lives and they are as eager as ever to return to live events. We are excited to add 3Olympia Theatre to our amazing portfolio of music sponsorships and look forward to welcoming fans back to the theatre soon. This venue holds a very special place in the hearts of music fans and we are committed to supporting the live entertainment industry and this iconic venue as it prepares to reopen to the public.”

Caroline Downey, owner of the Olympia Theatre: “The past 18 months has been difficult for the live entertainment industry and the investment of Three in this new partnership is more important than ever in supporting the venue to reopen its doors once again. Three has become one of Ireland’s most supportive brands in music with 3Arena and festival sponsorships as well as making a real and credible contribution to Irish music artists and we are delighted to embark on this journey with them as partners as we enter a new era in this venue’s storied history.”

‘3Olympia Theatre’ is one of Dublin city’s most respected and attended venues for live music and theatre. The historic Dame Street theatre has welcomed a host of the biggest names in world entertainment from Charlie Chaplin and Laurel & Hardy to the more recent appearances from Cillian Murphy (Ballyturk) and the Gleeson family – Brendan, Domhnall and Brian (The Walworth Farce). Its reputation as a stellar live music venue has seen performances from world famous artists from David Bowie, Radiohead, Blur, Robbie Williams to Hozier, Dermot Kennedy, Lizzo, Adele and many more.

To celebrate the announcement, Three has partnered with some of Ireland’s finest performers to pay a very special tribute to some of the amazing artists who have played at the 3Olympia Theatre throughout the years. The free live stream concert will be available for all music loving fans to tune in to with details of the virtual live show broadcast announced soon.

Top Tips to Level Up Multi-location Marketing for Your Business

A 6-Step Guide To Launching A Successful Outbound Calling Campaign