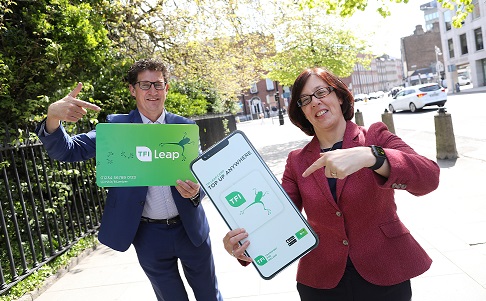 Transport for Ireland (TFI) Leap Card users with iPhone 7 or newer can now download the Leap Top-Up App from the Apple App Store and will no longer have to detour to a shop or ticket machine to load credit or ticket products bought earlier online.

While most Android users have been able to top-up using the app since 2016, it was not until October 2019 that Apple unlocked the ability for third party apps to access the on-board NFC for iPhone 7 and newer devices, with the release of iOS 13.

Chief Executive Officer of the National Transport Authority, Anne Graham said: “It has always been our ambition to make the TFI Leap Card Top-Up App available to a wider cohort of public transport users. I am delighted that we are now in a position to expand this service to Apple devices.

“In light of Covid-19, the ability to top-up from anywhere at any time from the comfort of your own home, will be a welcomed function for public transport user across the TFI network. Paying for your fare using the TFI Leap Card continues to be the safest way to complete your journey as restrictions are eased”.

Minister for Transport, Eamon Ryan said: “It is great to see the launch of the iOS Leap Top-Up App today. The TFI Leap Card along with the top-up app has made journeys across the TFI network more convenient for everyone.

“This additional feature for Apple device users will make public transport a more attractive option to people. TFI Leap customers are already making significant savings of up to 31% compared to cash payments.

“I look forward to seeing public transport users throughout the country availing of this hassle-free way of topping up their TFI Leap Card. I’d like to acknowledge the work that NTA has been doing in responding to customers’ needs by rolling out innovative products like this using the latest smartphone technology”.

To use the app, you simply touch the TFI Leap Card against your phone.

The iOS app has been in real-live customer testing for the last number of months and the National Transport Authority (NTA) says that the feedback has been very positive so far.

The Leap Top-Up App can be downloaded from the Apple and Android App store and further information on how you can use the feature can be found here.