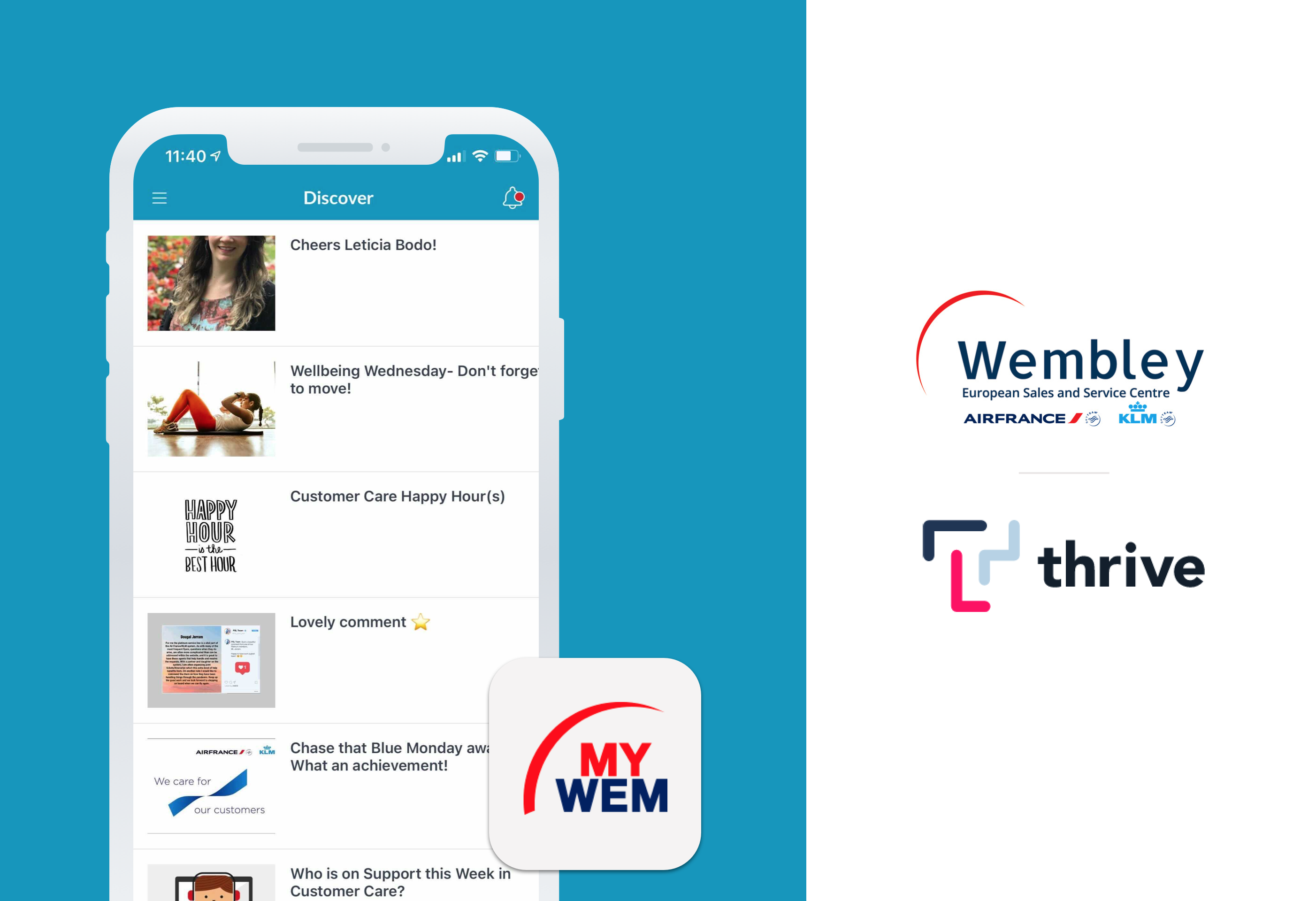 Air France KLM ESSC has continued its partnership with Thrive, which has involved the development of an employee engagement and communications app, ‘My Wem’.

Air France KLM is one of the world’s leading airlines, employing over 80,000 staff.  The company’s London based European Sales & Service Centre (ESSC) plays a crucial role in the success of Air France KLM; with now 200 of their employees working remotely, handling thousands of enquires each day from travellers around the world.

The ESSC needed to streamline communication, reduce the use of email and create a community to keep colleagues connected and the ‘My Wem’ app was launched to achieve this.

Internal Communications Officer at Air France KLM ESSC, Georgina Gray says; “We needed a cost-effective platform to keep our people engaged and connected. We could see that remote working could potentially leave our colleagues disconnected, especially now with the current Covid conditions and we wanted to break down department silos. We also wanted to future-proof our communication channel and thought an app-based solution would be the best choice.

The ‘My Wem’ app which is available on our team’s desktop and mobile phones has created a ‘virtual campfire’ for all of our employees. It has shaped our company culture, increased morale, and employee recognition. The app has aligned to our company values, it has simplified communication and increased the voice of the employee which is key to successful communication strategy. “

Since its launch, the ESSC has seen 120% increase in its employee’s engagement in the app. They have also seen an increase in productivity, reducing time spent with a more streamlined approach to HR procedures and information sharing.

James Revell, ESSC General Manager mentions “It has been so satisfying to see colleagues’ opinions on and interactions with internal communication improve so much since the roll out of My Wem”.

Georgina Gray adds – “Previously colleagues had to go through several steps to locate HR information that is now readily available for them on their app which immediately saves us time for colleagues to dedicate and focus on their role. Successful communication should be two-way and not just top down. We have the possibility for each colleague to participate in communication with the UGC (user generated content) feature as well as being able to like and comment on content”

James Scott, CEO, Co-Founder of Thrive adds;  “We sincerely value our partnership with Air France KLM European Sales and Service Centre and hope to continue to support them through these challenging times and beyond. Their employee app has been embedded across their organisation and its success is attributed to the Air France KLM ESSC team. Our goal is to help as many organisations as we can in shifting from traditional methods of employee communications and engagement such as team briefings, printed newsletters, notice boards, printed payslips and forms to instant, modern, secure, engaging mobile apps that their employees love.”