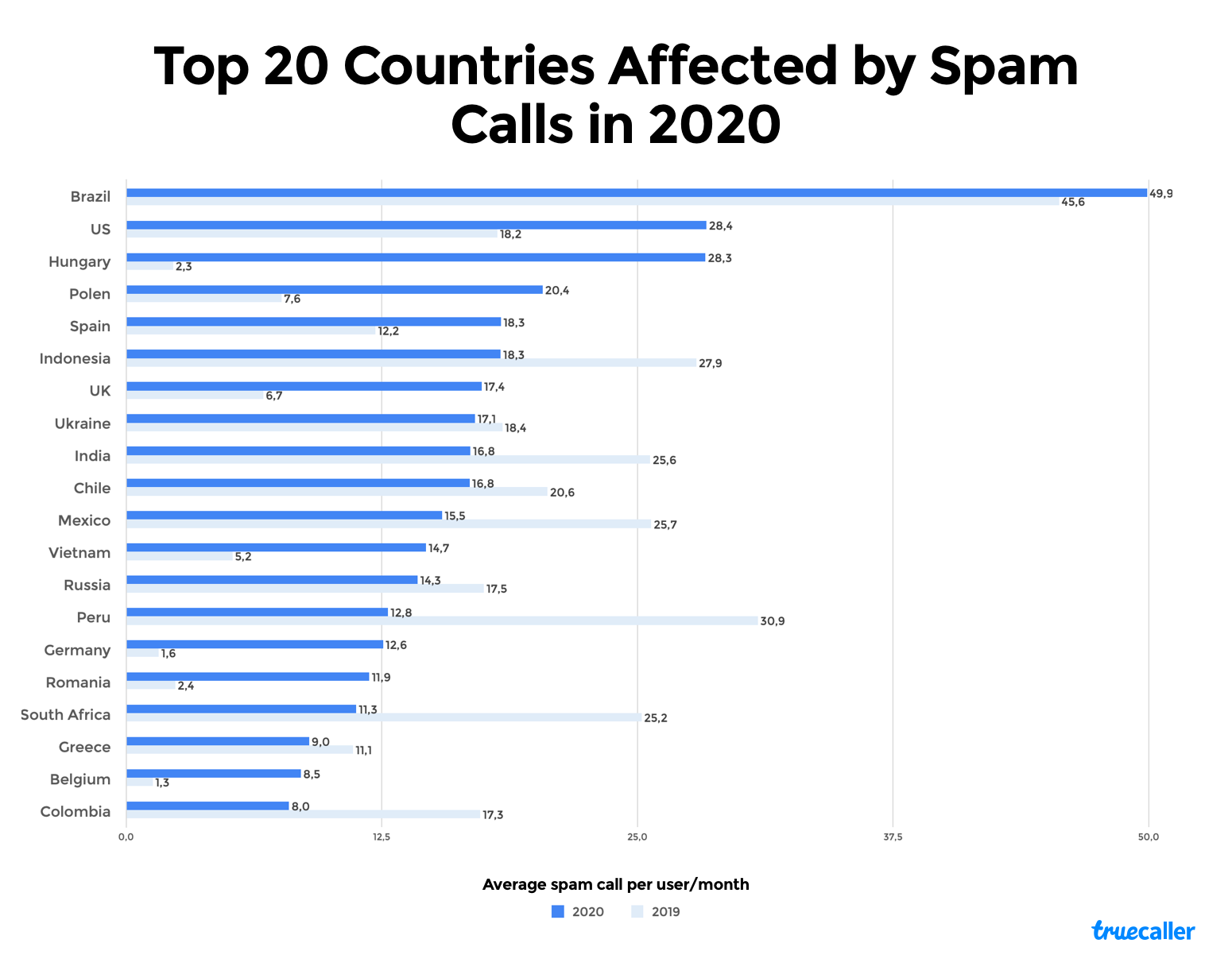 The global spread of Covid-19 has seen criminals exploit the public’s fear of the pandemic, with the number of UK spam calls surging 159% in the first ten months of the year.

In the largest piece of research of its kind global analysis of 145bn calls and text messages received by users of the identification and spam blocking app Truecaller revealed the UK is now the fourth most spammed country in Europe – and seventh in the world.

Other key UK findings include:

– Scammers are a rising threat

Scammers accounted for over a third (36%) of the total number of spam calls – and between April and October, scam calls jumped by 59%.

“Besides the sheer nuisance value of receiving unwanted calls and texts, there’s clear evidence bad actors are exploiting the public’s fears about the pandemic,” said Kim Fai Kok, Director of Communications from Truecaller. “An increasingly common scam is being told you need to urgently pay for a COVID-19 test as you’ve been in contact with someone who has tested positive. They’re very convincing and manage to convince a lot of worried people to pass on their credit card details which are then used to defraud them of their money.”

Truecaller is also publishing analysis of the top 20 countries affected by spammer – the key findings include:

– Spam calls and messages fell during the first few months of the global pandemic before rebounding to record an overall rise of 11.6%

– In the US, spam calls rose 56% rise, and it is now the second most spammed country (up from last year’s position of 8th)

– the problem is spreading across Europe. Hungary, Poland, Spain, UK, Ukraine, Germany, Romania, Greece and Belgium are now on the ‘top 20 list’ for the first time

– Last year’s report saw the top 10 countries dominated by the South American region. This year Chile, Peru and Colombia have seen a decrease in spam calls

– Like most workers, spammers take time off from work on weekends with most activity taking place during the working week

“This is the fourth edition of the Truecaller Insights Report, and what is noticeable is the significant shift in the countries that spammers are targeting,” said Kim Fai Kok, Director of Communications from Truecaller. “Across the world, bad actors and criminals are using technologies like robocalls to take advantage of the public’s uncertainties about the pandemic to send out record numbers of scam calls and messages.”

“As the virus spread exponentially earlier in the year, the number of spam calls and messages started to decrease globally around March and reached their lowest point in April when strict curfews and lock downs made it difficult for people to go to work.”

“However, rather than mitigating spam the pandemic only offered a brief respite to victims of scammers. Even though a large number of countries have re-entered lockdown in the latter part of 2020, this hasn’t affected global spam rates negatively. If anything, spammers have now adjusted to a COVID world.”

“Spam calls and texts are picking up again and have been increasing on average by 9.7% per month. For example, in October we detected a record high in terms of spam calls, driven by a 22% jump in activity compared to the pre-lockdown period.”