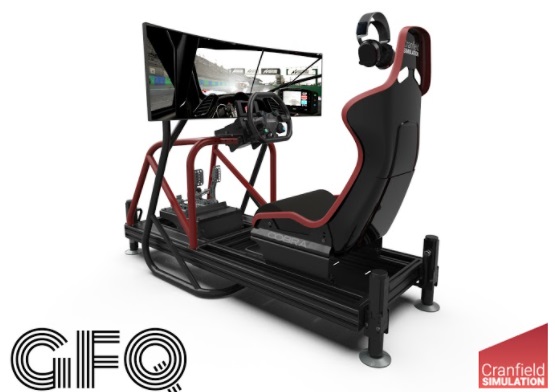 The new GFQ Simulator benefits from the partnerships Cranfield Simulation have established over the years with leading component manufacturers, as a result of the reputation in both the top tier of motorsport and military fast jet simulation markets.

“In order to claim the world’s best simulators we have to work with the best components, our team of dedicated engineers have carefully selected every component with feedback from professional racing and esports drivers.”

With a unique combination of both an aluminum extrusion base and steel tubular frame, the new GFQ Simulator is designed to fit through a standard doorway, yet strong enough to handle the toughest endurance race over and over again, without any flex.

Customers can select the best components to most accurately reflect their real-world racing aspirations; and top it off with personal touches such as exterior paint colours and trim options.

The result is a simulator combining leading sim racing components, built to extraordinarily high aerospace-level standards, yet offering staggering value for money when compared with competitor offerings of a similar specification.

The GFQ Simulator is now available online through a configurator, with a starting price of £9,700. To demonstrate the extent of customisation possibilities, Cranfield Simulation have created example setups to appeal to different users – including Sport, Race and Ultimate.

Driving enthusiasts have the choice of either Heusinkveld or Alkentech pedals, made from CNC precision cut steel or aluminum. Ultra-realistic steering wheels are provided by Precision Sim Engineering, as used by Formula 1 drivers, and attached to a Simucube direct drive wheelbase – as is the case with every simulator to come out of Cranfield’s converted hangar.

A selection of genuine motorsport seats are supplied by Cobra Motorsport, with over 40 year’s experience and a client list including legendary names such as Moss, McQueen and Clark.

It wouldn’t be a Cranfield simulator without some movement, D-BOX and Cranfield Simulation have been working together for almost a decade, so there is only one option for a compact haptic system, and the only FIA licensed option available on the market today. D-BOX’s haptic feedback goes beyond crude movement and taps into vibrations and textures such as traction loss and cracks of the racetrack surface.

All of these components come to life thanks to a high-performance, custom-built, “PC Specialist” system, with high-end gaming components including the latest headsets from SteelSeries.