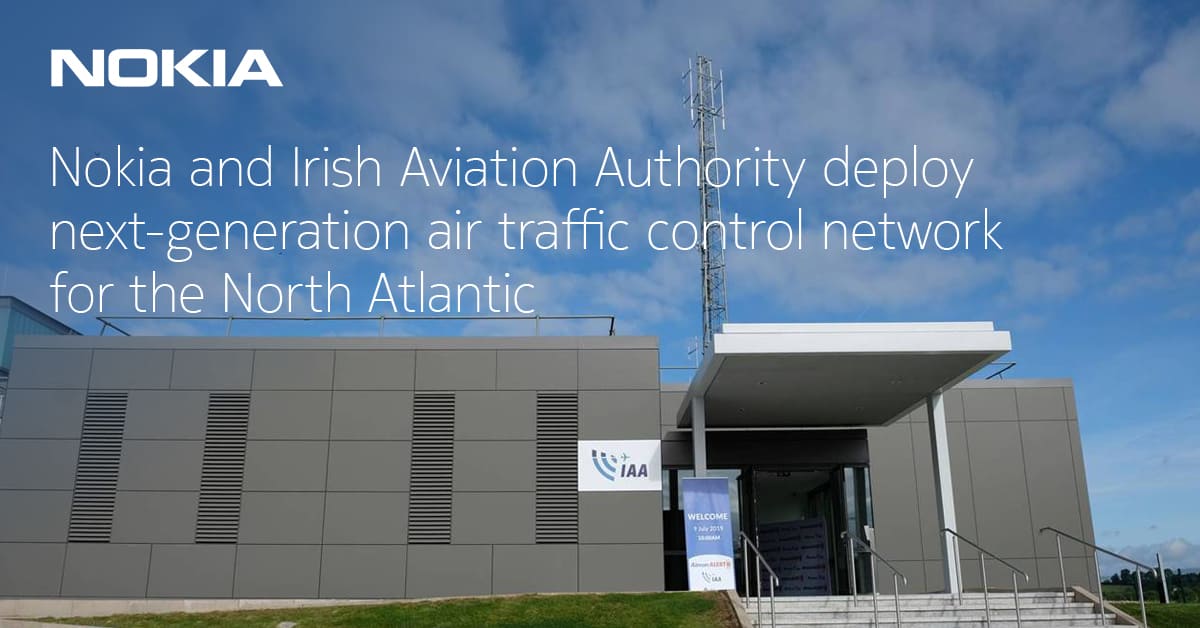 Nokia has today announced successful deployment of the Irish Aviation Authority’s (IAA) next-generation air traffic control network at its new West Ireland disaster recovery center. As part of the deal, Nokia supplied its IP/MPLS networking products, which have been specifically designed for this level of mission-critical application.

The network was deployed in early 2019 and is currently in service. It has successfully carried out a number of live trials across multiple airspace sectors in the key North Atlantic region, delivering critical voice and radar services to controllers over the new Nokia IP/MPLS platform.

The successful deployment of the network precedes the expected doubling of global air traffic by 2030. The North Atlantic airspace is one of the most crowded airspaces in the world and the IAA will need more capacity as traffic grows. Modern ATC management applications can scale to meet the demand but require a different kind of network connectivity based on IP, such as Nokia’s IP/MPLS.

Nokia has a long history building mission-critical networks for critical infrastructure such as air traffic control. Its IP/MPLS networking products are designed from the start to support legacy applications, as well as the latest capabilities for high-availability, mission-critical connectivity.

The Nokia-IAA deal is critical to the IAA’s roadmap to seamlessly migrate critical services to a fully operational next-gen network. The IAA plans to continue its work with Nokia, from design to deployment and into the future.

Billy Hann, Director of ATM Operations and Strategy for the IAA, said: “Given our responsibility to ensure the smooth operation of the North Atlantic airspace, it has been crucial that Nokia earn our trust. The quality and reliability of its technology and the thoroughness and collaborative approach of its teams has been first class throughout the entire migration process. We are very pleased and confident in the performance of the new network.”

Jochen Apel, Head of Global Transportation, Nokia, said: “From the initial proof-of-concept through to the final deployment and launch of the new network, we have been impressed and pleased to work closely with the IAA on this highly-critical application. Working side-by-side with its team, we ensured that the new IP/MPLS network seamlessly migrated all of its legacy applications and supported the new applications with the highest standards of reliability.”

About Nokia for Industries

Nokia has deployed over 1,300 mission-critical networks with leading customers in the transport, energy, large enterprise, manufacturing, webscale and public sector segments around the globe. Leading enterprises across industries are leveraging our decades of experience building some of the biggest and most advanced IP, optical, and wireless networks on the planet. The Nokia Bell Labs Future X for industries architecture provides a framework for enterprises to accelerate their digitalization and automation journey to Industry 4.0. Nokia has also pioneered the private wireless space with many verticals, and now has over 130 large enterprise customers deploying it around the world.