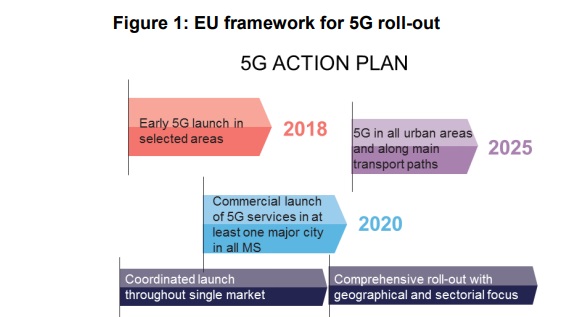 The cost of auctions of 5G spectrum is set to remain well within the financing capacity of Europe’s operators, particularly in countries without new mobile entrants to bid up prices. Meanwhile, the technology itself will have no significant impact on revenues or capital expenditure.

“The credit outlook for European telecommunications operators in 2020 is stable: we expect the progressive introduction of 5G in Europe to be largely neutral for credit quality,” says Jacques de Greling, analyst at Scope.

“With 5G unlikely to transform the prospects for only modest sales growth in coming years, and with room for cross-border M&A limited, telecoms CFOs are focusing their minds on balance-sheet management to preserve credit ratings with increasingly conservative dividend policies and disposals of non-core assets,” says de Greling.

In many countries the spectrum for 5G is yet to be or is only partially allocated to operators, while infrastructure is only in the early stages of being set up. Deutsche Telekom reported initial 5G coverage in just eight cities in Germany, with around 450 antennas at end-2019. Consumers have only a small selection of relatively expensive 5G handsets to choose from – about 1% of mobile handsets shipped worldwide in Q3 2019 were 5G-compatible, according to research firm IHS.

Scope expects 5G – as was the case with 4G and 3G – to encourage increased data-consumption rather than generate revenue streams from new markets – such as Internet of Things, virtual reality, and digital-health applications – which are likely to remain niche.

Better news for operators is the modest financial burden that acquiring 5G spectrum will represent. High auction prices from unexpectedly competitive bidding in Italy in 2018 and in Germany in 2019 will remain the exception rather than rule. Infrastructure spending will also not increase significantly with 5G: operators can use existing towers to install new equipment as 3G, 4G spending winds down.

Operators have few options for external growth given the absence of synergies in transnational consolidation while Europe’s competition authorities have all but barred national mobile-sector consolidation. Few cable operators have the means to consolidate national fixed-mobile sectors.

“We anticipate some further asset disposals in maturing emerging markets and the spin-off of mobile towers and fibre networks, or partial listings, that should help operators protect credit quality,” says de Greling.

French operator Orange is typical of the trend, having recently both created a common subsidiary regrouping its activities in Africa and the Middle East, paving the way for a possible IPO, and earmarked fibre networks built for French departments for a partial sale.