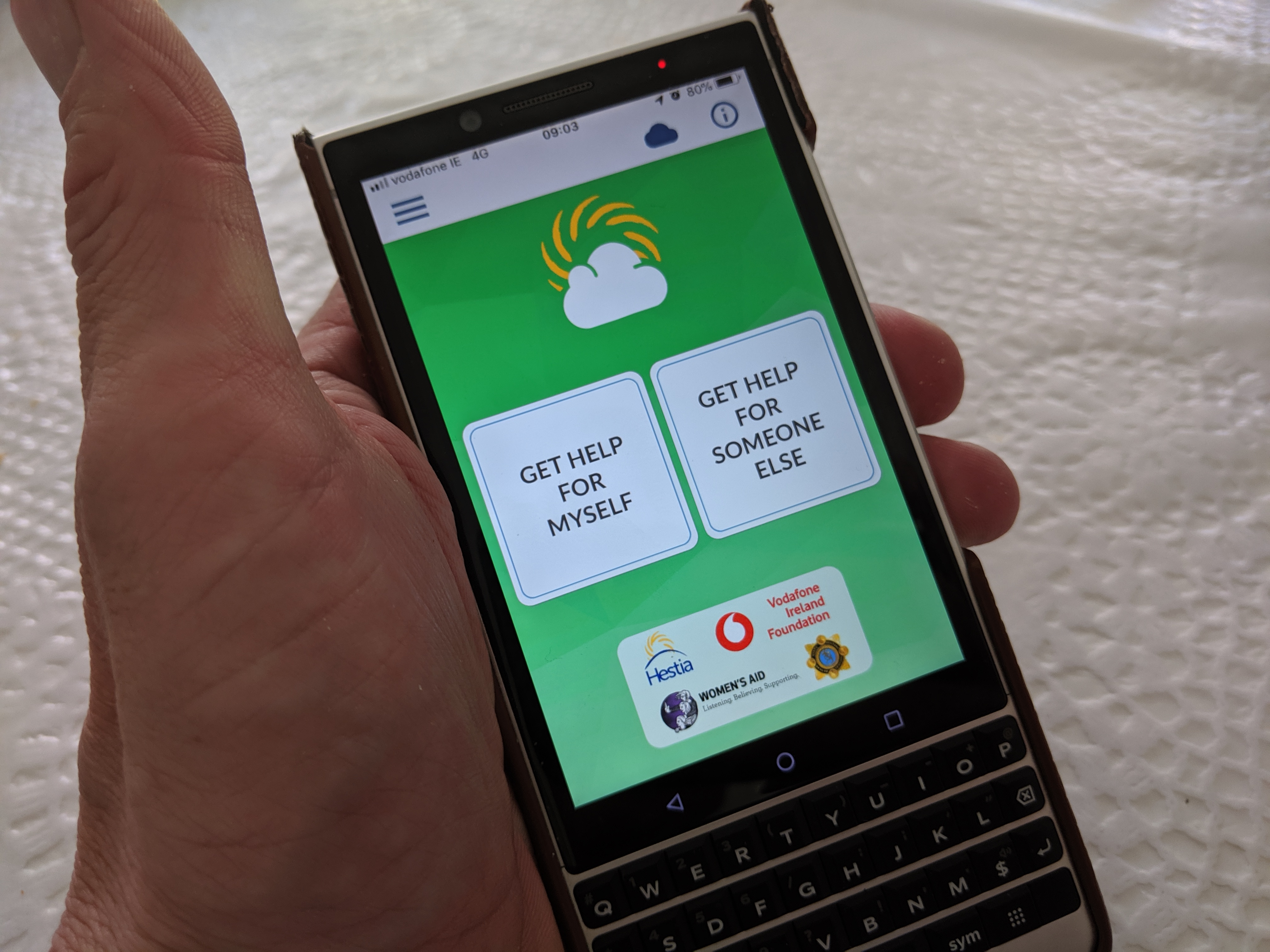 Bright Sky Ireland, A new free app that connects victims of domestic violence and abuse to advice and support services across the country. Bright Sky Ireland is the latest addition to Vodafone Foundation’s domestic violence project, which uses connectivity to help support those affected by domestic abuse here and across Europe. The app launches today on the Android and iOS platforms.

Bright Sky Ireland, created in partnership with the UK-based domestic abuse charity Hestia, along with Women’s Aid Ireland and An Garda Síochána, enables users to locate their nearest support centre by searching their area, eircode or current location. A short questionnaire will help users assess the safety of a relationship while also providing information about different forms of abuse such as sexual violence, stalking and harassment. The app also highlights the types of supports available, steps to consider if leaving an abusive relationship and how to help a friend affected by domestic abuse.

The app contains a ground-breaking feature designed to log incidents of domestic abuse without any content being saved on the device itself. It enables users to send information about incidents in a secure digital journal, using a text, audio, video or photo function. Evidence collated through this function will enable Gardaí to intervene and can help secure prosecutions.

Speaking on the launch of the Bright Sky Ireland app, Vodafone Ireland CEO Anne O’Leary said: “Unfortunately domestic abuse impacts many people across Ireland, with victims in some cases unable to get the support and guidance they desperately need. Following a successful rollout in the UK, I am extremely proud to launch Bright Sky in Ireland to provide victims here with a localised information and support portal. The app, developed by Hestia, with support from our partners in Women’s Aid Ireland and An Garda Síochána, is a very practical tool for people facing a variety of difficult situations. This launch also compliments the domestic abuse policy Vodafone introduced earlier this year for employees and managers to provide support in the workplace.

“Vodafone supports the wider cause in Ireland and wants to help highlight all forms of domestic abuse.  With a third of Irish workers experiencing domestic abuse and one in five Irish women affected by domestic violence, vital supports for victims are of paramount importance to us.”

Patrick Ryan, CEO at Hestia, said: “We know that without access to specialist services, the long-term impact of domestic abuse can be devastating. Bright Sky was conceived in consultation with women living in Hestia refuges in 2015. Their lived experience led us to create a much-needed app which has now been downloaded nearly 20,000 times. We are delighted that Bright Sky will now be available here in Ireland to provide those experiencing domestic abuse, as well as friends and family worried about someone, with the information and support they need to break the cycle of abuse.”

Sarah Benson, CEO of Women’s Aid said: “As Ireland’s national frontline domestic violence service provider, Women’s Aid is delighted to team up with Vodafone Ireland, An Garda Síochána and Hestia to provide a practical and useful tool for women experiencing abuse from current or former intimate partners.  Bright Sky Ireland offers key National Helpline information and details of local supports as well as information for family and friends concerned about loved ones.

A very important feature of the app is the myth busting information as well as quiz to help people recognise the signs of abuse.  However, our biggest hope is that the ability to log incidents of abuse whether it is photos, text notes or recordings, will help women experiencing abuse gather the pattern of evidence they need to avail of legal protection and secure convictions of the new crime of coercive control.”

Garda Commissioner Drew Harris said: “A core function of policing is protecting the vulnerable. Anything that can help An Garda Síochána to combat the terrible and all too common crime of domestic abuse is to be welcomed. This app will help inform victims as well as providing a safe way for them to record incidents of domestic abuse, which could help secure prosecutions, particularly in relation to the new offence of coercive control. The partnership approach to the development of this app also demonstrates once again how multi-agency collaboration is critical to keeping people safe.”

Minister for Justice and Equality, Charlie Flanagan said: “Violence against women is a blight on our society, and we must be more willing to accept this uncomfortable truth, to be open about it and to confront it. I am therefore delighted that the Vodafone foundation, along with their partners Hestia, have developed this innovative concept, the Bright Sky app, to tackle it. The app will no doubt be a significant resource to those experiencing domestic abuse situations.

I know that An Garda Síochana fully endorse it, and that in developing it, Vodafone had the support of Women’s Aid. The way forward is for the State, community and voluntary services to work together to respond to this violence, by educating the public, supporting the victims and dealing appropriately with the perpetrators.”

Early this year, Vodafone Ireland launched its new domestic abuse policy that aims to support employees who are experiencing domestic violence or abuse. The first comprehensive programme of its kind in Ireland, Vodafone provides support to employees – including, up to 10 additional days paid leave, specialist counselling, management training and support toolkits. The policy also provides emergency financial aid such as salary advances and assistance for employees to set up a new bank account that allows financial independence.