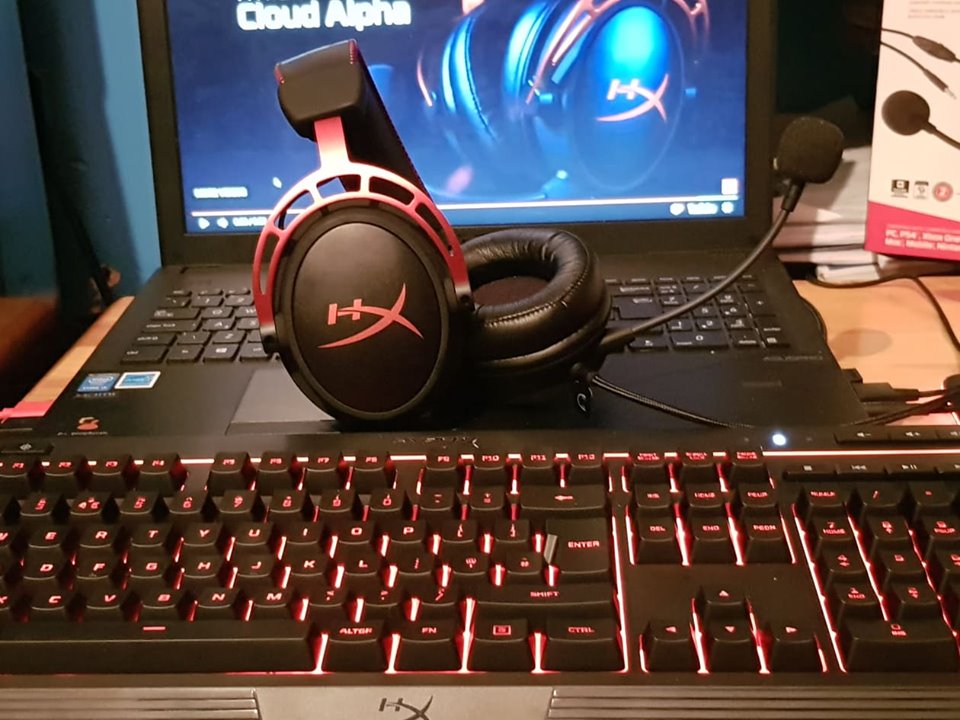 The first glance of the box for the HyperX Cloud Alpha Pro Gaming Headset has a concise layout giving clear prominence of compatible devices for this headset. The logo and the name of the brand on the box was clearly laid out with a brief description on the side of the contents in the box with a welcome warranty on the box. The red and white colours have a great contrast for the headset as the red and black headset catches the eye on the white background of the box.

Opening the box is a very easy and a quick process as the cover slides the box out very easily and reveals a nice glimpse of the symbol in silver on a black background box.

HyperX Cloud Alpha Pro Gaming headsets has a double chamber driver designed to give clearer and reduce disturbance as they reduce the noise. The audio was had precise sounding during gameplay when things are going on in a game. They design and feel was comfortable after hours of use attributed to the red memory foam in the headband and also in the leather ear cushions. The dual chamber drivers gave a clearer smoother sound as they control a high, mid and low tempo of the bass in both gameplay and also just listening to music. The headset frame is made of aluminium where many others tested have been  made with weaker plastic, which wears down in time,  The  design of the aluminium frame headset  is a lot more durable and in certain cases, a lot of gamers would really call out for these as most gaming sets could fall or wear over time especially pro gaming competitors. The detachable cables are also braided which gives it that extra protection and a feel of quality and strength. The detachable cord also has a volume wheel and a switch for the detachable noise-cancellation microphone so if you want to talk to someone in the room instead of taking the mic out the user can just flick the switch to turn the mic on and off. This headset is great for many reasons as it is compatible with PC, PS4, Xbox One and also any device with an AUX cord attachment like a phone or iPod. The microphone works on a phone for possible office work and does not have flashy lights distracting others around.

The headset is not distracting rather functional with a style and mat shiny red sprayed aluminium frame along with the black leather makes them an eye-catching headset which a classic old-style gamer would love. This headset is a high rated headset with a lot of great assets which most pro-gaming headsets would highly recommend.

Slight niggles ( but not a showstopper)

Compared to other models.

This HyperX Cloud Alpha Pro Gaming Headset is a premium rated headset which is comfortable after hours of demanding use, The headset is  full of handy features, for example, having an AUX cord so they can also be used in any sort of computer, console, and phone/iPod, they also have a volume wheel on the cord to higher and lower volume, a switch on the cord also to turn the mic on and off. Very high-quality frame made from aluminium along with a braided cable and comfortable leather with memory foam in the headband and ear covers reducing disturbing sounds and creating comfort. I have got a possible reaction from a variety of gamers on the look and feel of the handset.

This model stood out with pro gamer when streaming on the game and talking to his other gamers. They are clear when speaking through the mic and also a noise reduction mic. The headset is high quality and long lasting headset reasonable price under € 100  with the primary option for any type of gamer but could be used in an office environment. This is a recommended headset with a primary comfort feel after hours of use with excellent audio quality.